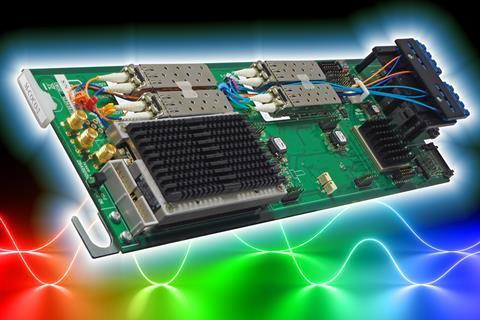 Crystal Vision: The M-COCO-2 is its ‘most feature-packed’ colour corrector and legaliser to date

Intended to help broadcasters save money by being 24% cheaper than the company’s alternative product, the M-COCO-2 can work with IP, SDI or both IP and SDI at the time, with support included for both SMPTE ST 2022 and ST 2110 video.

The product also includes features that make it a good solution for hybrid systems as well as fully SDI installations, including new adjustments such as two Y stretches for correcting the contrast on in-shot monitors, as well as support for an increased number of video standards (31 in total) and a built-in test pattern generator.

Like all of Crystal Vision’s IP/SDI video processing products, the M-COCO-2 is a software app that runs on the MARBLE-V1 media processor hardware – a card housed in the Vision frame which features a CPU/GPU processor and both SDI and 10GbE IP network interface connections.

Popular applications for the M-COCO-2 include adjusting the colours on in-shot monitors; being placed before an encoder to set the range of colours to be transmitted; and the correction of computer-generated or post-production outputs. Its colour correction tools include RGB gain, RGB lift, YUV gain, YUV lift, video gain, Chroma gain, Chroma hue, and both overall and individual RGB gamma adjustment.

Two new tools introduced by Crystal Vision for the first time are Black Stretch and Highlight Stretch, which are said to be particularly useful for correcting the contrast on brightly lit on-set monitors where the studio lighting has been set to suit the people in shot. These Y Stretches allow the signal to be stretched or compressed for a limited range of the signal, without affecting any other luminance levels outside of this range. The Black Stretch allows levels close to black to be more visible and brings the low level detail back into the final picture, while the Highlights Stretch facilitates useful changes to the bright areas.

To ensure the broadcast colour gamut remains legal, the M-COCO-2 app also includes a legaliser with both RGB and Y/C clipping available and a choice of four RGB clip modes (hard, medium, soft and desaturation).