Deity Microphones has revealed details of the latest addition to the Deity Connect family, the BP-TRX, which the company says “fills in the gaps that were missing with the current line-up”. 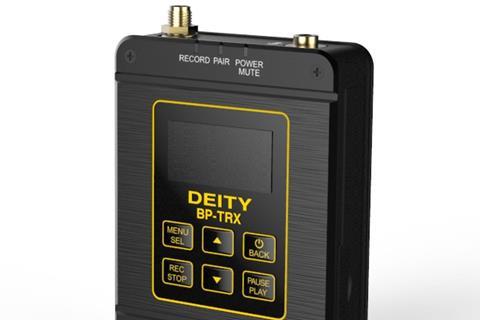 Deity: BP-TRX can serve as a traditional wireless microphone transmitter or a single-channel wireless receiver

The BP-TRX is technically a transceiver which means it can act as a traditional wireless microphone transmitter, but it can also boot itself into a mode that enables it to act as a single-channel wireless receiver.

“The BP-TRX is a personal dream come true,” remarked Andrew Jones, brand developer for Deity Microphones. “It’s a wireless audio device that doesn’t turn into e-waste as soon as the user is ready to move on to professional thousand-dollar wireless systems. Instead they can repurpose it and keep it in their kit, and run it alongside their thousand-dollar wireless system in a new capacity.”

According to Deity, the timecode accuracy of the BP-TRX is ±0.2ppm. This puts it in line with industry standard SMPTE timecode boxes and recorders. The BP-TRX drifts one frame after running for 24 hours, while the battery life for when booted into TC Box Mode is +25 hrs.