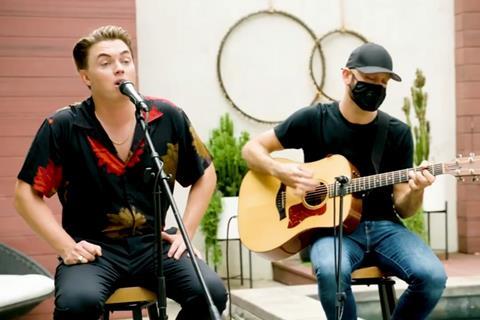 To adhere to social distancing guidelines, Pitch 5 Productions implemented extra on-set measures, such as COVID-testing crew and using COVID safety officers who are responsible for temperature checking staff and sterilising the set. In this context, the ability to work via a ‘virtual video village’ for creative remote editing collaboration whereby clients can watch camera outputs from separate locations, has allowed the team to avoid the extra risks related to a classic ‘video village’, where a crowd of creatives forms around the monitors on-set. Further advantages include a smaller footprint and a rapid route to editing and post production.

For the production of iHeartRadio’s ‘At Home Sessions’, Pitch 5 Productions was able to connect iHeartMedia’s director, talent,and the creative teams at brand partner Hellmans’ in real time. This meant there was no second guessing of what was actually being captured and framing changes and other tweaks could be made in real-time. This greatly sped up the editing process as the footage was logged directly from the remote video village overcoming any of the delays that were previously posed by file transfers or by the delivery of a physical drive.

“Dejero has helped keep not only our teams but our clients connected to the productions we’ve had all over the country,” said Pitch 5 Productions president Brian Gallagher. “The opportunities to work more effectively using this technology are limitless for us both now and in the future. All of our clients have been very happy with the entire process and we are too, as it has been spectacularly simplified.”

Dejero EnGo mobile transmitters and GateWay network aggregation devices make it possible for creative teams to collaborate from anywhere in the world, and tighten workflows by facilitating the secure and quick transport of live video and real-time data from sets to multiple locations more efficiently.

Dejero’s Smart Blending Technology allows the creation of reliable workflows that solve the connectivity, security and synchronisation issues that were previously associated with remote production, opening up a new world for commercial, film, and TV production companies such as Pitch 5 Productions. It combines multiple network connections and dynamically manages fluctuating bandwidth, packet loss and latency differences of individual connections in real-time

“Being able to see the content being shot from the camera via the Dejero EnGo mobile transmitter is a game changer,” added Gallagher. “Also, not having to rely on a WiFi signal has been really helpful, since the EnGo has its own cell signal. I have not found anything as close to the reliability the EnGo possesses for connectivity and stability when you’re working on-set, on a production. As for the concept of a ‘remote video village’ suggested by First Mile Technologies and the ability to send a signal straight to our editor for on-the-fly editing via the GateWay, this has revolutionised how we approach post-production not only during this pandemic, but for the future.”