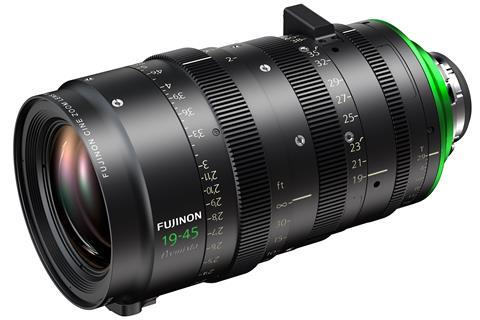 The 19-45mm, with its 13-blade iris, is claimed to produce images “with natural and beautiful bokeh, outstanding high resolution, accurate colour rendition, and controllable flare with minimal ghosting for capturing high dynamic range”. It should create very little distortion throughout the entire zoom range, reducing the requirement to correct footage after shooting. It covers large image sensors measuring 43.2-46.3mm diagonally – larger than a super 35mm sensor.

“The response we’ve seen to the Premista lenses since their 2019 launch has been tremendous both in terms of excitement and usage across feature film and high-end TV productions,” said Thomas Fletcher, director of marketing, Optical Devices Division, Fujifilm North America Corporation. “Now, with stricter safety and efficiency needs on set, there is a growing demand for high-quality zoom lenses that match the quality and look of prime lenses and efficiently capture images without the hassle of having to frequently change lenses. The Premista family checks off all the boxes, with no compromise.”

The lens has an overall length of 230mm and weighs 3.3kg (25mm shorter and 500g lighter than the other Premista lenses), making it suitable for handheld shooting using a Steadicam or high-angle shooting using a crane. It supports Zeiss eXtended Data, which can record lens metadata (focus, zoom and iris position) when shooting.

Fujifilm has also previewed a new Fujinon SK35-700mm PL-mount telephoto box lens (SK35-700) for 8K production, but it is going to do extensive market research first to explore the possibility of repurposing the lens in response to the needs of multi-camera cinema-style production. There are no other telephoto PL-mount box lenses on the market.

“We believe the SK35-700 will deliver on the growing desire of more producers to create a cinematic look,” said Fletcher. “The lens range creates the ability to shoot in immersive environments without obstructing views or otherwise interrupting the viewers’ experience.”

Fujifilm has also introduced what it claims is the world’s first autofocus-capable f1.0 interchangeable lens for mirrorless digital cameras: the Fujinon XF50mm F1.0 R WR, for its X Series of digital cameras, which include 4K-capable cameras.

Its f1.0 maximum aperture is particularly fast (there have been f0.95 lenses, but not with autofocus), and is said to be ideal for low light shooting. It also helps create very shallow depth of field, where its rounded nine-blade iris should offer attractive bokeh.