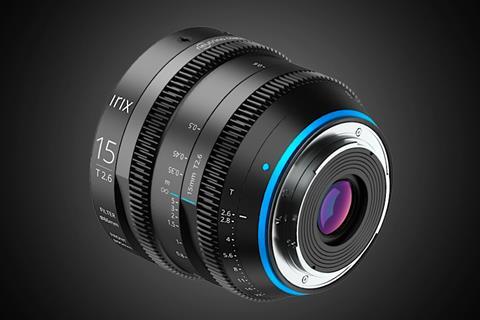 The lens’ optical system is made up of 15 elements arranged in 11 groups (including three HR lenses, two EDs and two ASPs). It is claimed to ensure “beautiful and vivid colours, image sharpness and minimal distortion, despite the ultra-wide field of view” as well as low lens breathing. It has nine rounded aperture blades, sealed construction for dealing with rain and dust, and its aluminium-magnesium alloy construction means it weighs less than 1kg.

As with the rest of the Irix Cine line, it is designed for filming at a maximum resolution of 8K, including CinemaScope.

Like the other lenses, the 15mm includes Irix’s innovative magnetic mount system (MMS) around the front of the lens for accessories, such as sun visors or lens covers. It also has an innovative adaptive ring that is designed to keep the lens housing sleek and user-friendly when operated manually, but to work without any compromises when used with cine gear, such as follow-focus systems. It is available in the most popular mounts: Canon EF, Sony E, Olympus/Panasonic MFT and Arri PL-mount.