If you want to stream live video direct to social media you could just take the easy option and shoot on a phone like everyone else, but no, you want to complicate matters by aiming for high production values, like good audio and a broadcast quality lens…. If so, JVC now has a firmware update that allows its Connected Cam UHD cameras to stream directly to social media and in both square and vertical formats. 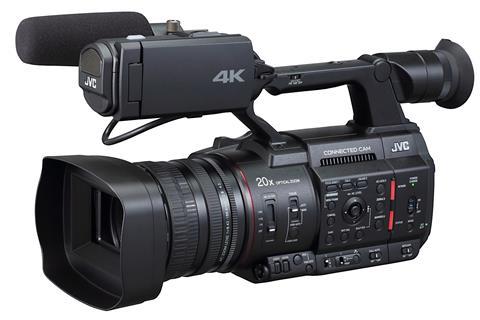 JVC: The GY-HC500 Connected Cam can truly square up to social media

The latest update includes social network video streaming with vertical and square guidelines on the viewfinder to ensure correct image capture for a variety of platforms and devices. It means JVC’s handheld 500-Series cameras can output streams in vertical (606x1080 and 404x720) and square (1080x1080 and 720x720) formats. The cameras can record UHD while streaming to social media and also delivering UHD HDMI output.

GY-HC500 users can access easy setup functionality so that they can stream to Facebook Live and YouTube Live with the click of a button. The firmware also incorporates RTMPS (the secure Real Time-Messaging Protocol) for its shoulder-mount GY-HC900 cameras.

The firmware update “further emphasises our commitment to being a leader in streaming video productions,” said John Kelly, General Manager, EMEA Professional Business Solutions. “As a Facebook Live Solution Partner, JVC is the only company to provide fully integrated Facebook Live streaming directly from a professional camcorder – originally with the GY-HM250, and now also with our GY-HC500 and GY-HC550 Connected Cam cameras. The new firmware expands on this functionality to include YouTube. This feature makes it possible for everyone from broadcasters and sports teams to event coordinators, businesses and houses of worship to live stream special events, meetings, games or services to the largest social networks with greater ease.”

Previously available on the JVC GY-HM250, the Easy Setup Facebook Live feature can now be utilised by GY-HC500 users for real-time broadcasting on individual, business and media pages. This allows users to stream in seconds versus having to type-in and adjust a range of settings beforehand. The new firmware also incorporates an Easy Setup YouTube Live feature, which not only provides direct-to-YouTube capability, but also enables users to schedule streaming with a specified start time.

JVC has also incorporated the RTMPS protocol for its 900 Series cameras, allowing those users to securely stream to Facebook Live directly from the camera. With this update, the entire Connected Cam line of camcorders is fully compatible with Facebook Live, the world’s largest social network’s streaming application.

The new firmware also adds various updates supporting its use of the open-source Secure Reliable Transport (SRT) streaming technology, such as Forward Error Correction (FEC) and Stream Identifier (ID) to all the Connected Cam cameras. FEC allows for redundant data stream packet loss recovery, meaning that data loss can be corrected before the video must buffer, while Stream ID makes it possible for multiple cameras to stream directly to one device. JVC has also incorporated VITC (vertical interval time code) and LTC (longitudinal time code) functions with this update, which are necessary for live production and synchronized streaming of live events. The free update is now available to download from the JVC website.