LaCie has introduced a new range of SSD and HDD disk drives designed to cope with 8K and 4K video respectively. 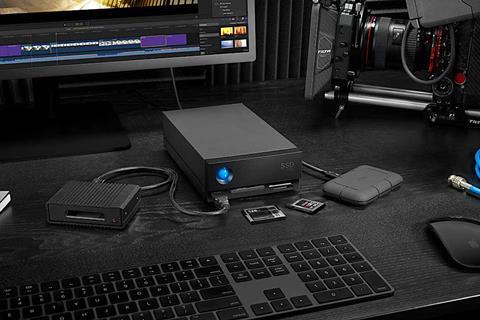 The new 1big Dock SSD Pro is equipped with a Seagate FireCuda NVMe SSD (2TB or 4TB), with Thunderbolt 3 ports, plus CFast 2.0 and CFexpress card readers, for very high bitrate video, while the 1big Dock comes in 4TB, 8TB and 16TB HDD capacities.

The 1big Dock SSD Pro is claimed to be “ideal for editing data-intense 6K, 8K, super slow motion, uncompressed video and VFX content”, with read speeds of up to 2800MBps, which can transfer up to 165GB worth of high-res material in 60 seconds – its write speed is up to 2100MBps.

It has two Thunderbolt 3 ports that are USB-C compatible and a docking station, including one built-in USB 3.0 port, cinema-grade memory card slots (CFast 2.0, CFexpress and SD) and a DisplayPort 1.4 output connection, which allows direct connection to a 4K 120Hz or 8K 60Hz display. The Thunderbolt 3 ports can daisy chain up to six devices, including dual 6K or 8K displays, while a Thunderbolt adapter (sold separately) gives backwards compatibility with any generation Thunderbolt computer.

The 1big Dock offers many of the same features as the SSD Pro, including direct ingestion of content from SD cards, CompactFlash cards and USB devices – no CFexpress. It can serve as a hub for peripherals, connecting a workstation with a single cable to reduce the need for extra dongles or adapters. The HDDs are 7200rpm units with a read speed of up to 280MBps and write speed of up to 240MBps. It uses Seagate IronWolf Pro enterprise-class hard drives and has a removable drawer to make it simple to swap in a new drive.

Both models can deliver up to 45W of power to a laptop or 30W when daisy-chaining compatible devices. However, LaCie’s new Power Pass-Through feature offers even more charge for a laptop. Daisy-chain the laptop’s USB-C power cable to the 1big Dock and the laptop can receive up to 70W. This also frees up a USB-C port on the computer.

LaCie users also now have more options for mounting its small, portable drives on their camera rigs. SmallRig has released mounts to attach either the LaCie Rugged SSD or LaCie Portable SSD directly to a camera. They both attach to a cage with two captive 1/4-20 screws and secure the SSD and USB-C cables. The mounts have an offset attachment on the top left corner of the cage, which helps avoid interference with an attached top handle, side handle or other accessories. Both cost $18.90 and are ideal for cameras like Blackmagic’s Pocket Cinema Camera 4K/6K, that can output huge amounts of data direct to an SSD.

For DITs there is also a new accessory from Innovativ to secure a LaCie Rugged drive to a DIT cart. The Innovativ DigiClamps ($59) are a pair of clamps that keep the drives secured to Innovativ’s DigiPlate. The cheese plate design allows the clamps to be positioned in a variety of configurations. Each clamp is secured to the DigiPlate using large thumb screws to make clamping easy on the fingers and very secure. Clamps come in two sizes to accommodate the LaCie Rugged Standard and LaCie Rugged RAID external hard drives.