Libec has introduced two new tripods and a new monopod. 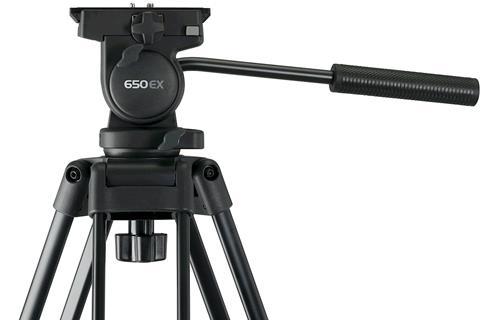 Libec: The new 650EX is positioned as an affordable entry-level tripod

The new 650EX is the follow up to its TH-650HD and is aimed at low-end use with a carrying capacity of up to 3kg for use with compact cameras. It costs about $250 and comes with a sliding camera plate compatible with Manfrotto and Sachtler heads (the previous model had a fixed quick-release plate). The two-stage legs come with one-touch flip locks, plus a transport lock for ease of carriage (there is also a travel bag included), as well as rubber foot pads with retractable metal spikes.

The new T150F heavy-duty tripod legs can carry up to 100kg and is designed to work with a flat base tripod head. The heavy-duty, $2,400 aluminium legs weigh 8.1kg (excluding the spreader and feet) and has a height range (with a floor spreader attached) of 58.5cm to 163cm.

Also new is the Libec TH-M Series professional video monopod, the successor to its HFMP monopod. This retains the free-stand capability of the previous model, but offers greater usability, expanded operability and easy maintainability. It includes a new Perfect Lock feature that is promised to make manoeuvring the head on the monopod easier than before.

Users can step on the lock/release foot pedals, located symmetrically in three sections on the free stand base, to quickly lock/release the monopod during photo and video shoots.

Because the monopod has three large feet at its base, it is more stable than normal, making it capable of standing on its own with a range of cameras, so that users can make equipment adjustments in between shots without the need to lay the monopod on the floor or lean it against a wall.

A built-in lubricated ball joint system, designed to prevent dust and debris from entering, offers smooth panoramic rotation. It takes a payload of up to 8kg (including any head - 1/4in screw or 3/8in screw) and weighs 1.8kg.

The aluminium monopod also comes in a kit version, which includes a head with tilt and pan functions, and has a dual head structure (flat base/65mm bowl), making the head compatible with 65mm bowl/flat base tripods, monopods, sliders, skater dollies and other equipment with 3/8in screws. The head can carry cameras up to 4kg. The kit includes a one-touch on/off sliding plate, while both versions come with a dual-size travel bag that stores the monopod with or without the head.