MADO XR, a Paris-based virtual production and immersive experience start-up that caters to the fashion and luxury markets, aims to offer a modern alternative to the way fashion events and imagery are produced. 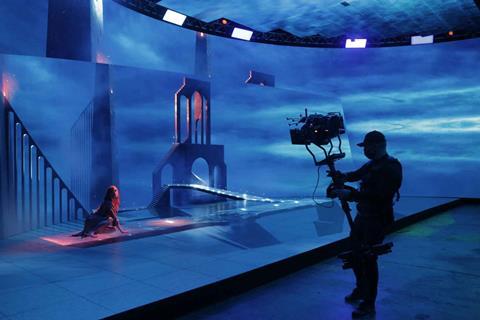 In October 2020, right after the Paris Fashion Week, the company produced a live demonstration in the largest virtual production studio in France, located in the city of Gennevilliers just outside of the capital. Department heads and creatives of major fashion and luxury brands as well as key executives from the entertainment and advertisement industry were present at the performance.

The demonstration mixed live performance by combining tracked objects and actors within a virtual space with real-time rendered photorealistic environments in a 15m wide by 5m high 360° LED cave. For the realisation, the creative team relied on ARRI lighting and camera technology.

The virtual production experience was illuminated by eight SkyPanels S60-C and two Orbiters. Steadycam operator Karim Boukerche and first AC Cyril Deloux captured the demonstration with an ARRI ALEXA Mini LF camera and an ARRI Signature Prime 21mm lens with the support of TRINITY stabilisers and a variety of accessories such as the Wireless Compact Unit WCU-4, cforce lens motor, LMB 4x5 and ARRI filters.

“This partnership with ARRI allows us to produce broadcast content with a texture and quality that is unique to artistic films,” explained Lancelot Rumney-Guggenheim, director de production and co-founder, MADO XR. “Our research has led to the development of new innovative concepts for video recordings, immersive experiences and the pushing of boundaries that upgrade the level of creativity and innovation.”

Thibaut Ribéreau-Gayon, business development & technical marketing manager for camera systems at ARRI France, said: “The idea behind this partnership is to create an exchange between both companies, in order to do pure research and development and think about future products or adapting the current ones. We know that the next new step is to facilitate more communication in the virtual world; more communication between light and camera will lead to a maximum level of metadata in real time.”