The latest hardware decoder from Magewell is able to support both Newtek’s NDI technology for media transport and the Secured Reliable Transport (SRT) protocol – which was developed and open-sourced by Haivision – for H.264 and H.265 streams over IP. 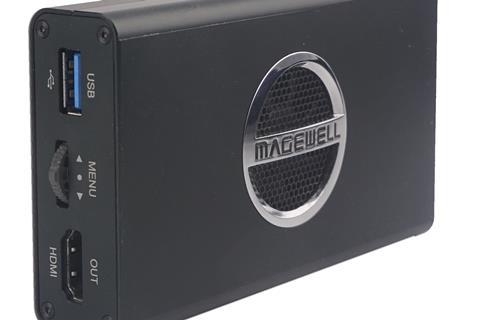 Due to have been showcased at the NAB Show this month, the Pro Convert for NDI to HDMI 4K decoder transforms IP streams up to 4Kp60 for baseband over HDMI. Also launching is a second model, the Pro Convert H.26x to HDMI 4K, which offers the same features as the other converters but without NDI support. Both models also support additional streaming protocols, including RTSP, RTMP, UDP, RTP and HTTP.

The compact devices measure 100.9x60.2mm with a height of 23.3mm. They can be powered via external adapter or PoE, while users can manage advanced features of the devices using on-unit controls, a browser-based interface, or a connected keyboard or mouse.

Nick Ma, CEO and CTO at Magewell, commented: “We have received considerable interest from customers wanting the flexibility of decoding either NDI streams from their internal networks or SRT streams from external sources over the public internet.

”Each technology has its own distinct advantages for different applications, and we are seeing deployments of mixed infrastructures using multiple technologies to support specific production, display and distribution facets of the content chain. With support for NDI, SRT and even more protocols, the Pro Convert for NDI to HDMI 4K gives customers the versatility they need as their IP workflows evolve.”

Commenting on the SRT support offered by the new decoder, director SRT Alliance at Haivision Jesús Carrillo remarked: “SRT was created to enable secure, reliable video transport over unpredictable networks such as the public internet, and we see it as complementary to IP media transport technologies such as NDI that are most commonly used for private networks in production or internal distribution workflows.

”Magewell has a tremendous reputation for delivering innovative yet practical solutions that empower its customers to leverage the benefits of the latest technologies. We’re excited that it is developing multi-protocol, SRT Ready solutions that allow users to choose the best technology for their workflows.”