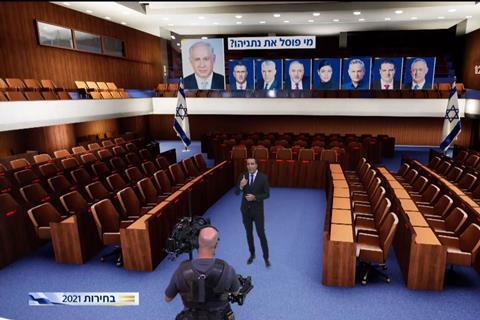 Zero Density: A virtual recreation of the interior of the assembly was created for the broadcast

The famous stone path of the Knesset, the national legislature of Israel, the assembly and its interior were created in virtual for the production.

SegevSport produced the first project of Zero Density’s Production Partner Program with the election. It built a pop-up virtual set inside N12’s studios for the live broadcast.

The company, which has specialised in virtual studio, augmented reality and events driven by data for the past two decades, delivered an immersive election night for the channel.

During the live event two Engines were used and the studio deployed two cameras, DynamiCam’s Spidercam and a Steadicam. For the tracking technology, TrackMen was chosen.