Keeping focus when you are working with shallow depth of field on a full-frame lens can be difficult, which is why Cinematography Electronics released Cinetape, and the more recent Cinetape 2, to measure the exact distance. 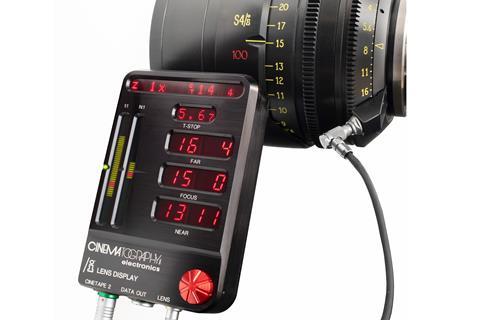 Cinematography: The new /i Lens Display unit with a Cooke S4/i lens

Now it has made reading this distance a lot quicker and more visual with the new /i Lens Display unit. This takes the lens data and shows it as a multi-coloured bar graph to make it really obvious where your focus limits are, particularly useful in situations where both subjects and camera are moving.

It works with Cooke Optics’ /i technology (lens metadata) as used not only on Cooke lenses but also on cinema lenses from other manufacturers, such as Angénieux, Arri, Canon, Fujinon, Leica and others.

“The /i Lens Display combines the metadata from the lens, with information from the Cinetape 2 and displays it in a way that is more user friendly for camera people, for focus pullers and for those that just don’t want to mess with all of the individual metadata details,” explained Cinematography Electronics’ president, Larry Barton. “We also have a bar graph that displays whether what they have in focus is right in the middle, at the far end, or at the near end of the depth of field.”

The result is a quick and simple system that helps ensure with a single glance that the focus plane is where it should be, saving time and increasing efficiency on set.

“Cinematography Electronics was the first company outside Cooke that worked with /i technology and we are delighted that, close to two decades later, it is still helping push the boundaries,” said Les Zellan, chairman, Cooke Optics. “Focusing is becoming increasingly critical as more and more people seek to apply the Cooke Look to full frame work, and this is exactly the sort of clever tool to help cinematographers and focus pullers that was behind the creation of /i technology in the first place.”

A control jog wheel (lower right on unit) allows users to display different information in the top window, such as hyper focal length, subject distance and focus marks. It can also display the entrance pupil position and angle-of-view, information that could save hours of prep time before a motion control shoot.

Lenses equipped with /i Technology work with the camera to give continuous remote readout of the precise focus setting, T stop and depth-of-field. With Arricams and LDS cameras, this lens information is delivered directly through electronic contacts in the Arri lens mount. Used with other cameras, an external connector on a Cooke /i lens attaches by a cable to the Cinematography Electronics’ /i Lens Display unit.