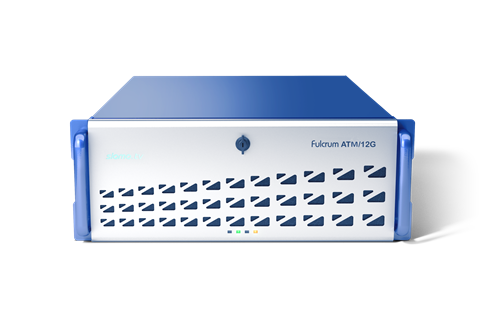 Future: The unit can be upgraded to 4K remotely when needed

According to Slomo, the latest Fulcrum server significantly boosts performance when working with 3G/HD video. In addition, its flexible architecture, large number of channels and a price starting at €50,000 is said to make it attractive in the current economic situation. In its basic configuration the SSD-based system has four graphics ports, two 10GbE and 12G SAS ports, four toolless/trayless DMR racks for 3.5in SATA drives, and options for transferring clips and playlists between servers as well as the Telestrator.

Support for 4K can be installed remotely when needed, and this licence opens a 4 Rec + 2 Play + 4 Search + FX configuration in Replay mode and up to six recording channels for NLE.

Like all Slomo.tv servers, Fulcrum features DMR technology for direct recording of NLE native video files. In this mode, the Fulcrum ATM/12G records the incoming video simultaneously on internal SSD storage in a proprietary format and in NLE native files with the selected codec on standard 3.5in SATA hard drives or to a NAS. This achieves the highest safety, maximum convenience and production speed, claims the company.