Panasonic is showing a new 8K camera based on organic sensor technology that it maintains is the future of camera sensors.

Stefan Hoffman, manager sales engineering, Panasonic, said: “This will solve a lot of the limitations we are facing in the 4K area, especially for high speed applications,” said. 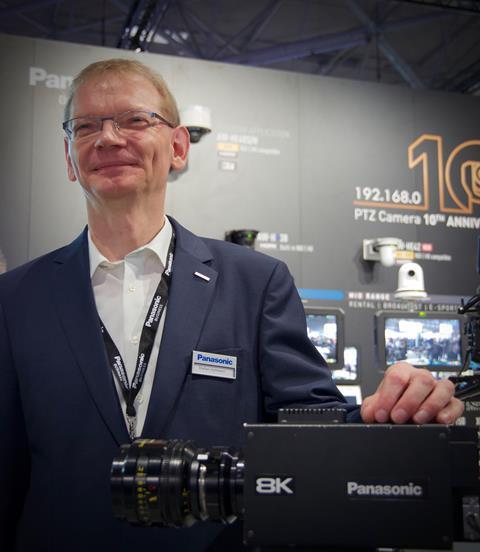 Indeed, he claimed it will supersede current CMOS technology, which he said “is coming to its end.”

Initially, it will target the high-end market with the OPF (Organic Photoconductive Film) sensor, which has been developed specifically with the Tokyo Olympics in mind – Panasonic has been a long-time partner of host broadcaster, Olympic Broadcast Services.

Panasonic anticipates that it will be used first at the 2020 Olympics. The camera offers native support for wide dynamic range. Its Electronic Neutral Density Filter (ENDF), reduces or introduces light more smoothly than traditional optical ND filters, and its Global Shutter shows none of the skew typical of rolling shutters when shooting fast moving images.

Panasonic is also introducing an 8K ROI (region of interest) system that can deliver five shots at once (with up to four 4K or HD crops from the one image). Shipping after IBC, it will cost €130,000 for a complete setup.