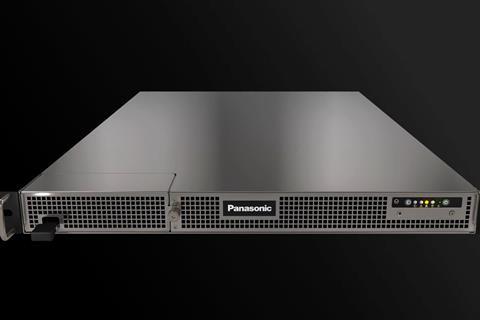 As a native IP, ST 2110 system, Kairos supports transitions to live IP workflows and can eliminate dedicated hardware constraints. It is a COTS-based system that should allow it work with “a mosaic of IT ecosystems with a variety of vendor components from several industries”.

“Kairos is introduced as the content creation industry transitions to live IP workflows, requiring broadcast and event producers to think about how they will future-proof their productions and facilities,” said Guilhem Krier, Panasonic’s head of new business & market development for MEBD & DSC Business Units. “With an ever-growing set of tools and hardware, producers need a comprehensive solution for multiple applications to break free of the boundaries of traditional hardware. As an IT/IP platform based on an open software architecture, Kairos takes the various components of a broadcast programme and virtualises them, so productions are flexible, dynamic and powerful.”

For television studios, Kairos should seamlessly integrate into a facility’s ST 2110 infrastructure without requiring additional IP gateways. For houses of worship, Kairos can handle both screen management and linear broadcast needs and can also accommodate new devices or non-traditional displays. For sports and entertainment venues or event productions, a wide range of staff can employ the user-friendly GUI to deliver content or set-up complex systems with limited training time.

The platform offers standardised IP connectivity in place of one-to-one video inputs and outputs, which enables Kairos to support baseband and IP signals in any combination. It also features uncompressed processing of SDI, ST 2110 as well as NDI streams of any resolution such as HD and UHD and in any format, whether 16:9 or non-traditional formats such as 32:9 for an LED backdrop display. It can also work with HD and UHD sources simultaneously, upscaling or downconverting as necessary – or cropping an HD region from a UHD source.

The Kairos system centres around the rack-mounted Kairos Core, which handles all video processing. The initial main frame will manage video I/O through a Deltacast gateway card and/or a Mellanox 100GbE NIC (Network Interface Card) connection to COTS IP devices and SDI and HDMI gateways. Control will be managed on devices operating over a separate Gigabit Ethernet connection, including: the Kairos Creator GUI software for set up and software-based control panel; and Kairos Control, Panasonic’s 2M/E style hardware control panel.

More Kairos Creator or Kairos Control sites can be added to the network wherever an operator, engineer or technical director needs to be. Additional network hardware and an I/O expansion licence can grow the number of sources and screens. Additional compatibility and features will be available through additional licence keys and adding additional main frames will allow users to scale the system up to most organisations’ requirements. Kairos will start shipping in the third quarter (2020), and the minimum configuration will be available for about €30,000.