Pomfort has released an extensive update, with more than 100 new features, to its colour management and grading software: Livegrade Pro and Livegrade Studio. 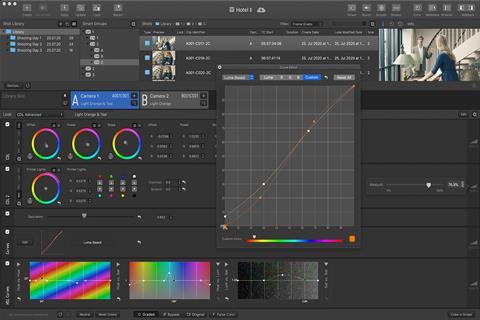 The new version 5.2 of Livegrade introduces a wide range of enhancements to its core colour grading tools, including all conventional colour curve modes, added integration for Elgato Stream Deck devices, dramatically simplified management of shots with smart groups, and the ability to exchange look information via the newly introduced cloud-based system ShotHub.

DITs and colourists working on set with Livegrade will find the highly requested RGB-Curve and Hue-Sat-Lum Vs curve tools that should provide more creative grading options. A new curves interface allows users to add creative looks like Bleach Bypass or Orange & Teal in seconds or to modify specific colours to perform subtle tweaks to specific areas of the image.

Livegrade also introduces other powerful new features that customers have asked for. Users can now map and trigger Livegrade actions from Stream Deck devices to tremendously speed up repetitive tasks and ultimately the entire on-set workflow. With its collection of more than 200 shortcut icons, along with pre-built profiles, the Stream Deck will fit well next to any control panel so that users can get up and running faster.

Livegrade 5.2 also makes it easier to structure and manage shot libraries. Users can create smart group folders based on metadata that help to filter and to retrieve looks or reference media in a more efficient and flexible way.

“Livegrade 5.2 is a comprehensive and powerful release that we think both on set colourists and DITs are going to love,” said Pomfort product manager, Wanja Nolte. “We’ve built in advanced colour grading features customers have been asking for and, with the addition of device integration for Stream Deck and the new cloud-based look exchange functionalities, we think that Livegrade makes the next big step to further support the production workflows more efficiently.”