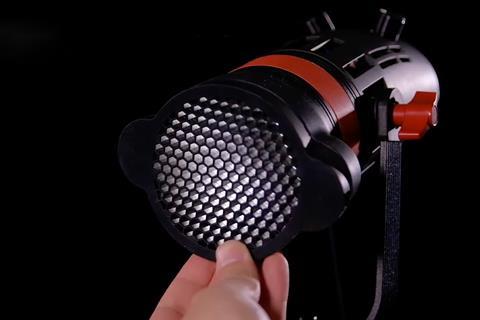 It has an adjustable Fresnel lens to focus the light and provide a longer throw (with a variable beam angle of 20-60°), but when used without the lens the light becomes a wide-angle flood light, with included barn doors to help to control the spill. It has a claimed Television Lighting Consistency Index of 97+.

The new version now has two battery slots for Sony-style NPF batteries. It can also be powered from AC (with included power adapter) or V-mount battery, via the included V-mount D-Tap adapter cable and optional adapter plate. It can operate with 12-14.8v batteries. A built-in cooling fan is claimed to be barely audible at a distance of 1m.

It has an adjustable frequency setting for strobe effects, as well as several other effects built in. It also has stepless dimming, an LCD screen and built-in WiFi allowing users to control it via a mobile phone app or via an optional remote control. It comes with a filter set that includes soft, milky-white and orange filters. An optional Bowens mount can be used to add a softbox and other studio accessories, and there is also an optional magnetic snap fit filter kit.