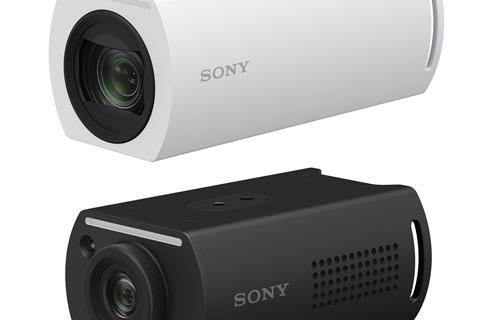 There is a choice of wide-angle SRG-XP1, a PoV-style camera, or the SRG-XB25 Box-style camera with 25x optical zoom lens, which offer users new options for sites that are hard-to-access or where there is no space for a full-sized camera and operator. The cameras is said to be ideal for applications in corporate, education, healthcare or live broadcast.

They need only a single network cable, using power-over-Ethernet technology, for simple set-up of power supply, image distribution and camera control. They can also be configured to be compatible with NewTek’s NDI i|HX standard via an optional licence and support Real Time Streaming Protocol and Real Time Messaging Protocol for easy recording and distribution of video and audio.

The 122mm-long SRG-XP1 PoV camera can capture video across a more than 100º wide horizontal field of view, which is useful for recording reality shows and in settings such as esports and remote meetings/discussions, where the entire location can be captured regardless of the installation position. The 178mm-long SRG-XB25 box camera is designed for larger spaces thanks to its 25x zoom for capturing footage from a distance. Both come in black or white.

The cameras can also be combined with Sony’s AI-based Edge Analytics Appliance (REA-C1000) for remote shooting and streaming. For example, with Chromakey-less CG Overlay, the SRG-XP1 can easily create attractive video content in confined spaces. This function extracts the presenter and overlays them onto any background, without the need for dedicated backscreen or special training. Similarly, the SRG-XB25 could be used with the REA-C1000’s Handwriting Extraction feature, by zooming in on writing in a presentation. This ensures that viewers can clearly see written content and diagrams, as well as the gestures and expressions of the presenter, simultaneously.

“Recently the world has witnessed drastic changes to the way we work and learn. Such circumstances have created a pressing demand for efficient remote communication and content production that multiple users can access anytime, anywhere with peace of mind,” said Bruce Tanaka, general manager of Imaging & Analytics Business Department, Sony Imaging Products & Solutions. “That trend also increases the need to create and distribute high-quality video content quickly and in an efficient manner.”