Berlin-based Stage Tec has introduced new features within the 1.12 software release for its Avatus IP console, notably the simultaneous operation of the console between two sound engineers. The virtual division of a console takes place in blocks of 12 control strips each. 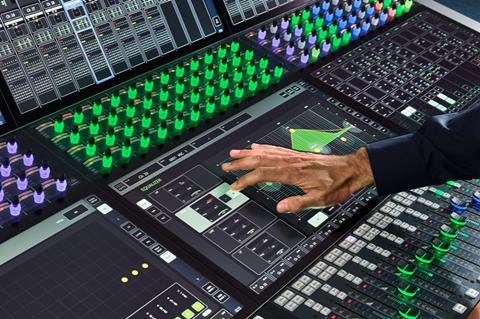 In the divided scenario, both sound engineers have unlimited and independent access to various functions. They have their own Solo and PFL functionalities at their disposal, each in its own control room, according to Stage Tec. The global layer switching, function selection and synchronous scrolling of lists only affect the respective user area. Even functions such as spill, the temporary link function or Aux-/N-1 to faders (including auto lists) can be altered independently by both sound engineers. Furthermore, both users can access all audio channels simultaneously and work with the same channels (for example Ambience).

Stage Tec claims the new software release also enhances performance and response times significantly, and the talk functionality of the two command paths can now be assigned to any user button.

Especially for collaboration between sound engineers, the console now offers the possibility of temporarily linking one of the two control rooms to the other at the push of a button. Alternative monitoring function for both Avatus control rooms is another new feature.