Stype Follower is a leader for intelligent AR and VR

Stype’s new Follower is an AR/VR system aimed at bridging the gap between virtual graphics and people, in that it enables presenters and actors to interact with the graphics, and even take graphics in their hands and play with them as if they were real.

It’s also useful for pinning graphics to physical objects, so a presenter or actor can focus on the physical object while the viewers see the graphic – all in real-time. It means on-screen talent no longer have to carefully manoeuvre around graphics to avoid looking silly, so can relax and act naturally. 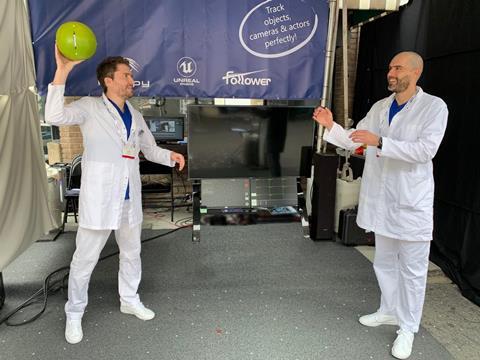 Follower works by combining small, active infrared LEDs (up to 511 of them) with four infrared cameras spread around the set. LED positions are read by the infrared cameras and you can place any graphic in the place of the LED. When the LED moves, the graphic will move - giving you the freedom to move the graphics around your set as you like.