Following the announcement of its mirrorless Eos R5 and Eos R6, 8K and 4K cameras, Canon has admitted that the combination of “high-resolution and high frame rate video recording options using the maximum width of the full-frame sensor at high bit rates” can lead to overheating, which limits recording time. 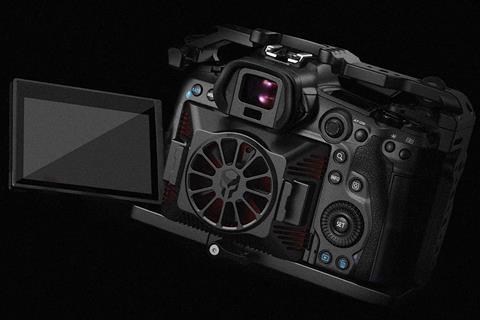 Tilta: The new cooling module fits in the space occupied by the Eos R5’s LCD

The first reviews of pre-production R5s differ considerably on the extent of this effect in real-life use, with one saying that even an hour of taking “about 30-40” stills left the camera too hot for high-quality (4K or 8K) video, while another suffered considerable downtime during a documentary-style shoot, and a third found no problems.

Canon itself maintains that the R5 will record 8K 30p, full frame, including Raw, for 20 minutes before overheating, or 4K 120p for up to 15 minutes (in short bursts), 4K 60p full frame for 35 minutes (or with APS-C crop – 5.1K oversampled, for 25 minutes). The R6, which goes up to 4K 60p, can do 30 minutes (or 35 with APS-C crop). Both should achieve longer run times at lower resolutions/frame rates, and these figures are for use in 23ºC ambient temperature. However, it also admits that users will have to wait for the camera to cool down before further, even more limited shooting – eg: after shooting 8K 30p a wait of 10 minutes would allow a further three minutes shoot (20 minutes gives eight).

The advice Canon gives for reducing this heat build up include: Set Overheat Control function to ON (default). This automatically changes the movie size and frame rate while the camera is in standby to suppress the rise of the internal temperature. Between recordings, it is recommended to turn off the camera, and it should be positioned out of direct sunlight.

It also recommends users to fit an external fan to dissipate heat, which is where Tilta comes in with its new Tiltaing Camera Cage for Canon R5, which can be fitted with a new cooling module. The modular design can also be fitted with handles and other accessories, and as most users routinely fit these type of cameras with some sort of cage or other rig, it shouldn’t make too much difference to their workflow.

In order to extend recording times and help mitigate overheating, the “easily installed module” combines a fan, heat sink and temperature sensor. It will activate as needed and is designed so it doesn’t block the camera’s built-in LCD – indeed, it fits in the space on the R5 left by the open tilt and swivel display.

The seven-blade fan can spin at up to 6200rpm, powered externally by USB-C, with a noise level of 34dB, making it almost inaudible in most circumstances. It boasts a maximum temperature reduction of about 28ºC, and is claimed to decrease the temperature to 15ºC in one minute. It has a smart controller to ensure it doesn’t bring the temperature down too much (to prevent condensation). No pricing has been given yet for the cage, although its versions for similar cameras cost $99 - the cooling module will be extra.

Tilta has also just released a full, if tiny, camera cage for the DJI Osmo action camera, which offers “complete protective armour” for the camera body while providing several 1/4-20 mounting points as well as two cold shoe mounting points (one on the top and one on the side of the cage). It costs $39.