The Venice motion picture camera system from Sony was used for principal photography on the political thriller Official Secrets, directed by Gavin Hood, which is slated for a cinema release in October 2019. 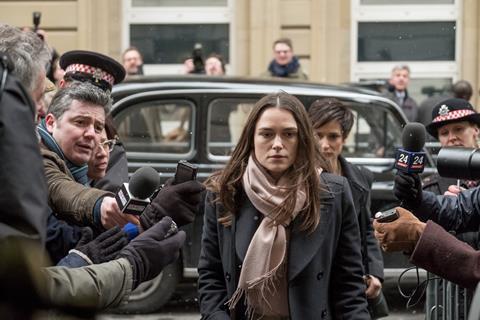 The film’s cast includes Keira Knightley (pictured, above), Ralph Fiennes and Matt Smith. It is based on the true story of Katharine Gun, a former translator at GCHQ.

Gun leaked top-secret information to the press concerning a joint US-UK illegal spying operation against UN Security Council members, in their push for the 2003 invasion of Iraq. Sony’s Venice – with its full-frame 6048x4032 resolution sensor, colour science and user-friendly operation – was chosen to bring Gun’s story to life.

The film’s director of photography, Florian Hoffmeister BSC, explained: “Large format cinematography has become a great asset of digital filmmaking and the Sony Venice represents a huge step forward in that field. The camera has an incredible ability to deliver a natural richness in colour, which – in my experience – means a huge development in digital. With any camera I try to find the ‘sweet spot’ where the image itself comes alive; through the way it communicates with the lenses and depicts the colour and light. The Venice kept its promise every time we lit a scene.”

Two Sony Venice camera systems were used for principal photography with the production team avoiding the use of anamorphic lenses, and effectively adding additional layers of glass, in an aim to maintain the natural and pure aesthetic of the movie.