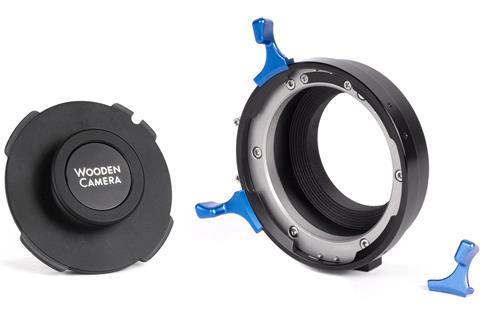 The new Quick Release Bridge Plate is an Arri dovetail-compatible baseplate in two versions: 19mm and 15mm. They snap on and snap off vertically, meaning users don’t have to slide the camera to remove it, which is useful for confined spaces. They have a new two-stage locking mechanism that allows them to be either fully dismounted from the rods or opened halfway for just sliding to change the position. The rubberised metal plates each weigh 420g and can be adjusted fore and aft to balance.

The Arri LPL Mount Adapters allow users to fit lenses like Arri’s Signature Primes to Canon RF-Mount and Leica L-Mount cameras. The 216g adapters have a 1/4-20 thread fitting underneath to allow heavy lenses to be supported or attached to a tripod.

The L-shaped Mini Vertical Camera Bracket is a CNC-machined aluminium fixture offering universal vertical mounting for compact cameras. It has multiple 1/4-20 and 3/8-16 threaded holes plus pass through slots on both the horizontal and vertical plates for attaching to tripod plates, camera bodies and other accessories. Wooden Camera already offers a larger bracket for cinema cameras, but the new one is 45% lighter (at 1080g).

There is also a Director’s Monitor Cage v3 Vertical Conversion Kit, which repositions the handles used on Wooden Camera’s monitor cage to enable the monitor to be more easily held and viewed vertically. With the kit attached, users can switch the handles between vertical and horizontal positions without using tools.

Wooden Camera’s new Micro Touch and Go System is an industry-standard quick-release system compatible with Sachtler FSB 10T, 8T, FSB 6T, Touch and Go Plate S. It is claimed to be lighter than other systems (at 221g) due to the recess designs on its receiver and plate.