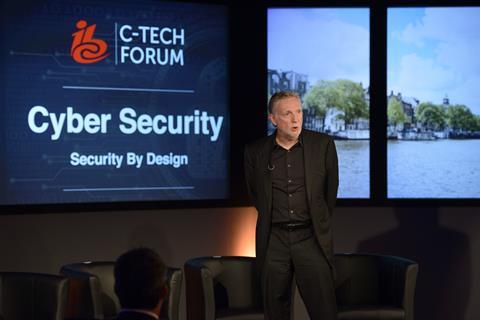 During the C-Tech Cyber Security Forum delegates heard from experts who addressed the widespread assumptions of cyber terror, the best defences, preparation and response techniques for the media and broadcasting industry.

The likelihood of accelerated attacks going into 2018, is high, delegates heard, with the pace of digital transformation among OTT providers and digital distributors meaning there is lack of understanding around secure procedures and data protection.

Production and Media Technology Expert Spencer Stephens spoke to IBC365 about the impact of cyber security on the broadcasting industry.

He said: “First of all, accepting and ensuring senior management buy into the fact that the attacks are going to happen is incredibly important.”

“We’ve seen the availability of so many tools that make it less of a skilled exercise. Whether it’s a breach of the CIA tools or whether it is the impact of starting to see malware as a service. Rather than themselves attacking anybody, they become a service offering for people who want to do it.”

Stephens, who chaired the inaugural cyber security C-Tech Forum, said: “What we are looking at here is an across the board threat to media and broadcasting companies on a scale that we have never seen before.”

An active defence is critical, he said: “There are precedents for how you react – at what point do you shoot back?” Cyber warfare is incredibly complicated, “anybody who is not prepared for cyber attacks is really not understanding what is going on in the world.”

For broadcasters, the potential breach of data and cyber threats can cause irrevocable damage to their reputation as well as legal implications.

Stephens explained payment of ransom doesn’t mean the hackers will comply with their demands and you could invariably be helping to fund terrorism.

”There is a general principle that paying ransom money only inspires more people to do it.

”What we learnt from the attack on the post house that led to the comprise of Netflix’s Orange is the New Black is that paying the ransom doesn’t always work. That content was released anyway,” Stephens said.

Joined by experts from across the broadcast industry production and supply chain, the resounding statements concluded due diligence must be exerted and common-sense practices need to be executed with complete awareness company-wide.

Arqiva Chief Information Security Officer Denis Onuoha said: “Cyber security is the same as health and safety in this day and age.”

DPP MD Mark Harrison said: “As concern about cyber security grows there have been repeated calls for more consistent practice regarding security measures.

“But without a common frame of reference, this has been difficult for suppliers. The DPP’s Committed to Security Programme establishes such a best practice framework.”

“No scheme can ever guarantee the removal of all cybersecurity breaches,” Harrison said.

“But by displaying the DPP Committed to Security logo companies are indicating to their customers that they are addressing cybersecurity in a structured fashion. This is particularly important in multi-vendor environments where continuous change also requires continuous vigilance.”