Drones are not only smaller than Formula 1 cars, they’re quicker too. Aurora Media Worldwide’s coverage of the DR1 drone-racing league has given the production team the chance to help shape the sport from the ground up.

In many ways drone racing is the perfect TV sport for the latter part of the 2010s. It combines a traditional sports format with the new tech glitz and innovation of eSports and does it all at a furious pace in a series of glamorous locations around Europe. 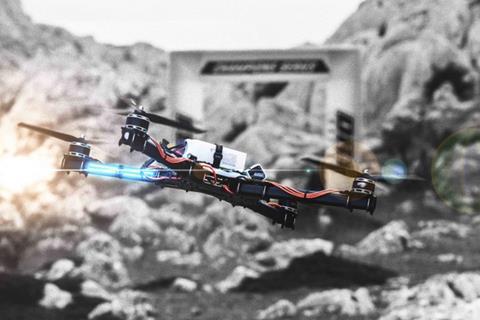 “It’s motor racing, but in three dimensions rather than on a two-dimensional track,” explains Executive Producer for Aurora Media Worldwide (AMW), David O’Carroll.

“All the components are there: the overtaking, the competitiveness, there’s a pitstop. But there is no set format, so what we were able to do was look at the format of the race and then figure out how that would work on the screen rather than apply standard motor racing logic to it: analyse it, deconstruct it, and then build it back up again.”

AMW has produced a 6x1 hour formatted series for Eurosport, Fox Sports Asia and beIN Sports which debuted on October 25th and will be shown in more than 100 countries around the world. And as the full, rather unwieldy name of the series, the DHL Champions Series fuelled by Mountain Dew, illustrates nicely it has serious sponsorship in place. 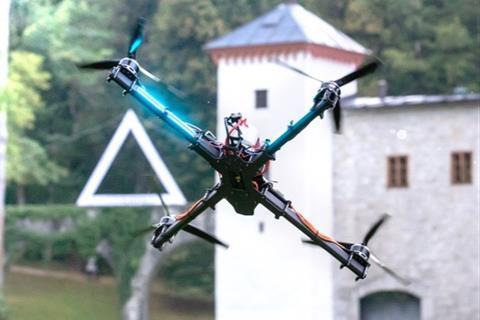 The drones are fast too. The newest Pro Class drones that DR1 is debuting this season are over a metre in length, weigh five kilos, and can reach 100mph in a little under two-seconds. They’re not only smaller than F1 cars, they’re quicker too.

“The speed of the event surprised us and the organisers too,” says O’Carroll. “We turned up at race one in France and we were told the lap time of the circuit would be about 80 seconds. Within the first practise session the teams had it down to under one minute. By the end of the session the lap was down to 19 seconds. When you begin to break that down, with 16 cameras as a drone goes round the course, that’s pretty quick cutting.”

With the races being captured over the summer for autumnal broadcast, AMW decided to treat them as live so the producers could simply walk away from the circuits with a multi-camera cut of the race. 16 HD cameras, both operated and remotes, were placed round the circuits, feeding straight into EVS in a NEP OB unit.

While the production team knew the location of the circuits beforehand and thus could work out the lay of the land when it came to cabling and set-up, the actual details of the circuits themselves were closely guarded secrets to stop the drone teams modelling and practising them beforehand.

“Racing was one part of the whole thing: the characters and the rivalries between the teams and the individuals were very important.” David O’Carroll, AMW

“The camera operators had to be on it all the time to make sure they were following a drone, let alone the right drone,” says O’Carroll. “The sixth race of the series saw the drones go up the side of the DHL Post Tower in Bonn, across the top and down the other side, and following that tiny little thing flying at 100mph up and down is no mean feat. It’s not unlike tracking a golf ball I’d imagine.”

The difference being that golf balls tend to simply follow Newtonian physics while drones are at the mercy of whatever and wherever their pilots decide to manoeuvre them.

“A drone crashing from onboard cameras? It’s quite good: it flips and the horizon goes all over the place,” says Carroll. 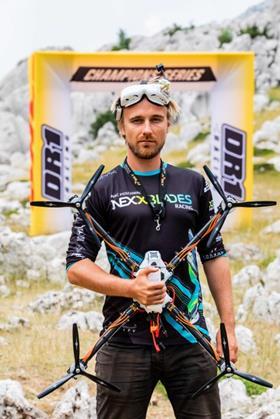 The kit used to cover the racing was all conventional broadcast gear, until it came to the drones. Each drone has an onboard camera that feeds back to the pilot, and AMW tapped into these feeds to help see detail of what was going on out on the course. That footage wasn’t cut into the main feed — though O’Carroll says that it could be if they ever move into a live event broadcast — instead the team used the drone-mounted GoPro footage to insert relevant onboard sequences in at the edit.

“This year was a learning process for both us and DR1, but the way we’ve structured it and the building blocks we’ve put in place, if next year they turned round and said we’re going live, then we could do it.”

Capturing the drama of the racing through was only part of the project.

”Racing was one part of the whole thing: the characters and the rivalries between the teams and the individuals were very important,” explains O’Carroll. “So we had three or four teams filming those particular pieces which were then cut into the race.”

Everything was done with cross platform in mind. While, of course, all content could be used across all platforms, certain types of material was always going to be destined for social media short form, especially short clips showing humour, conflict and so on.

“One of the things we did was identify the characters and give them a nickname and a lot of the content we created was to emphasise those personalities. We had a production manager with a camera travelling with the teams throughout the five weeks of this production cycle and a lot of that found its way into the social content.”

With the series two months in the past already by the time it airs, thoughts are already turning to next season. More extensive use of the new Pro Class drones is going to necessitate new circuits, as well as a brace of new permissions to fly the larger, heavier, and frankly more dangerous machines. The AMW team has also learned a lot from this season that it will apply in 2019, with plans to cut down the number of race cameras by around half balanced by the desire to make each camera position manned to provide more of a sense movement with each shot.

As Liberty Media continues with its tinkering of Formula One and in general there’s an increasing need to re-engage with viewers, it’s an interesting time to be taking motorsport apart — albeit three dimensional aerial motorsport — and putting it back together again in a way that appeals to a millennial audience.

“It’s not often a new sport comes along where you get to work with the rights holder and shape the sport as well as the TV production,” says O’Carroll.