Drones have become as much of a mainstream accessory product as tripods or batteries, writes Douglas I. Sheer.

It was in 2004 that drone systems began to see military uses for delivering ordinance in war zones. 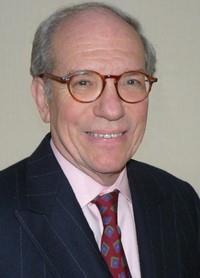 However, the earliest recorded use of an unmanned aerial vehicle for warfighting occurred on August 22, 1849, when the Austrians attacked the Italian city of Venice with unmanned balloons loaded with explosives known as Austrian balloons.

Then they became popular consumer toys catering to the same sort of customer who in the past might have gotten pleasure in flying radio-controlled model aeroplanes.

But, in the past few years, drones have been taken seriously as commercial and professional tools, particularly for carrying cameras into hard to reach places much more affordably and safely than helicopters or small aeroplanes.

From the recent high-rise Grenville fire in London where a drone was used during and after the horrific event to search for victims, to the trans-channel flight of a large drone car carrying a pilot, to routine uses in movies, drone technology is also rapidly becoming a mainstream professional tool.

Most of the dominant brands of drones in use among professionals are not surprisingly made in China and sell for prices not too far above those of similar consumer models, averaging in the low thousands of US dollars or Euros.

There are, however, many brands, often made in America or Europe, that are larger, more rugged and often far pricier than the Chinese brands, but these are often dedicated to heavier lifting, longer range operation or niche applications.

Then too miniaturisation and the manufacture of ultralight cameras using microfibre are allowing for the use of even smaller drones as well, allowing for some truly unique applications.

Sizing the commercial/professional market requires segregation from the consumer market which is best when done by application rather than manufacturer or model.

In the USA alone, 820,000 mainly professional/commercial and consumer individual drones have been governmentally registered for approved operation since that became a requirement in 2015, but the true installed base – cutting across all types of applications and users – likely runs into the millions of units. Many millions of consumers have purchased them but not registered with the authorities. In many regions registration is still a new and untested concept.

In a recent survey, respondents were asked to rank the features and factors they would value most in a new video drone. 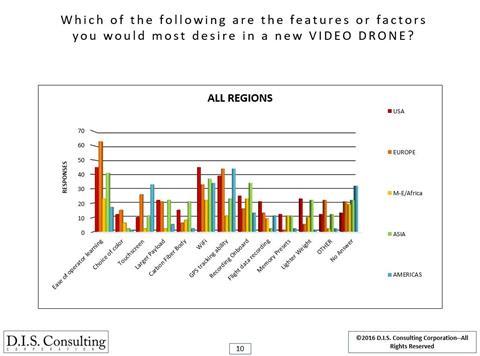 Professionals that use drones in Europe (indicated by the orange stripe in the data chart above) chose Ease of Operation (a key to training new pilots), GPS Tracking of drones to reduce losses and WiFi control capability as the three most strongly sought-after factors and features overall.

The above findings are just some of those found in the extensive D.I.S. Consulting Corporation publication ‘Professional Drones World 2016’ which is subscribed to by many professional use drone manufacturers.

The report which was published in the autumn of 2016, looked exclusively at non-military and non-consumer uses of drones on a worldwide basis.

While consumer units run into the millions, this study targeted only commercial and professional uses of drones.

Our report showed 468,977 drones were owned/installed among purely commercial and professional users by the end of 2015. It also showed that 231,000 units were expected to be purchased in 2016 by year’s end for the same or similar professional uses, on a global basis.

The USA has been and remains the single strongest regional marketplace, with Europe the second strongest.

The installed value of all units as of 2015 was depicted as $1.4 billion dollars and the annual market value in 2016 was estimated to reach $645 million for the single year, worldwide.

Production and freelance capture segments account for the most units installed, with construction and institutional (including educational, corporate and governmental uses like police and fire) in a close third and fourth place.

While drones have seen a wildly dramatic uptake in this past decade, particularly the recent five years, some saturation may be seen in the commercial and professional units because of such intense purchasing.

We anticipate that non-camera uses, such as delivery drones will soon dwarf camera-toting models in professional settings.

Douglas I. Sheer is Chief Executive and Chief Analyst of D.I.S. Consulting Corporation