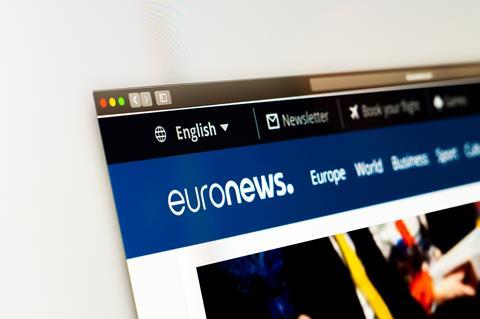 European auditors have raised concerns Euronews does not serve the European public’s best interest as it is “not accessible to most or all citizen in the European Union (EU),” despite being funded by taxpayer money.

The EU spends around with €24.5 million to supports Euronews to develop a unique business model and broadcast programmes on EU affairs in several languages.

About a third of Euronews’ annual turnover comes from funding in the EU, according to the auditors, and Euronews’ geographical and linguistic coverage “could not be maintained without this EU support.”

European Court of Auditors member Mihails Kozlovs said: “The EU provides a major source of revenues to a TV channel that is mostly privately owned.

“The European Commission should verify annually if Euronews complies with the commitments on preserving its editorial impartiality and a European perspective.

“But we found no formal link between these commitments and the Commission’s criteria for annually awarding the funds.”

Transparency and fairness
Euronews is a multilingual 24-hour news TV channel, launched in 1993 by a group of ten European public broadcasters belonging to the European Broadcasting Union (EBU), with the aim of reinforcing European identity and integration.

Euronews is legally established in France and as such subject to the French regulatory framework on audio-visual communication.

The Euronews annual 2018 transparency report found: “Euronews showed, in the cases under analysis, a commitment to fairness, accuracy and impartiality, that there were no cases where the independence of the journalists was undermined and that a range of viewpoints was available in most stories.”

The European Commission has supported Euronews and sponsored the production of programmes on EU affairs since the channel’s creation.

Since 2010, following a Commission Decision that Euronews contributed to the European general interest in the field of information, the EU funds have been provided through successive Framework Partnership Agreements (FPAs). In 2018, the Commission committed €19.96 million for Euronews support.

In 2014, the Commission stated its intention: “Developing and promoting a sustainable business model for Euronews, including by further developing its public service remit, by helping to identify new partners and by making better use of digital transmission technologies, in full respect of the editorial independence of Euronews.”

In 2015 and 2017, two new private shareholders acquired share capital, resulting in the channel being 85 % owned by private investors, and 15 % owned by EU and non-EU broadcasters as well as by local public authorities.

The Commission has introduced a performance-reporting framework for its funding of Euronews.

However, it does not have a system to verify whether Euronews is achieving the objectives agreed in the partnership agreements.

The auditors concluded, because the Commission has no formal mechanism in place to coordinate the specific contracts its services sign with Euronews the transparency of the financial support provided to Euronews and accountability is reduced.