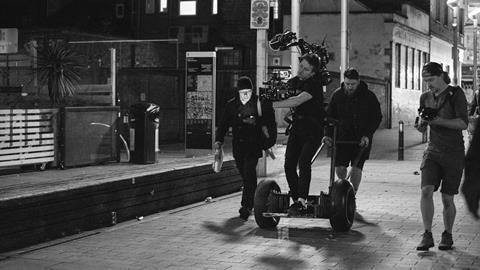 Behind the scenes: Boiling Point

Stephen Graham is a chef with a simmering temper in a feature length one-take kitchen drama filmed at a real-life restaurant. Director Philip Barantini and cinematographer Matthew Lewis explain how it was done.

The trick with running a restaurant is to make it look effortless and you can argue the same is true of filmmaking. New feature Boiling Point peels away the serene service of fine dining to reveal the raw tension of a chef on the edge and does so in an ambitious 90-minute single take that dissolves completely into the drama. 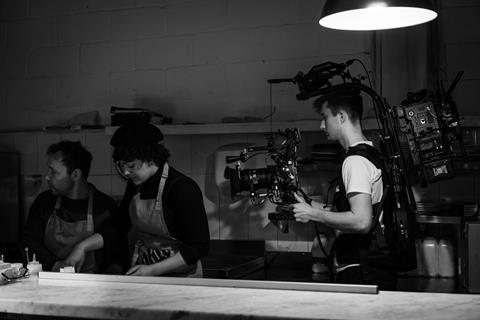 Boiling Point is directed by Philip Barantini, photographed by Matthew Lewis and stars Stephen Graham (The Virtues, The Irishman) who together tested the one-shot technique to film a 20-minute Bifa nominated short of the same name in 2019.

“The idea to do a ‘one-er’ was to create an extra layer of tension and intensity to this world. When we finished the short and there was a bit of buzz about it but hardly anyone brought up the single take. That was music to our ears because we didn’t want it to be a spectacle,” Philip Barantini

“We did that as a proof of concept to see if it was going to work – the last thing we wanted was a gimmick,” Barantini tells IBC365.

“The idea to do a ‘one-er’ was to create an extra layer of tension and intensity to this world. When we finished the short and there was a bit of buzz about it but hardly anyone brought up the single take. That was music to our ears because we didn’t want it to be a spectacle.”

Single-shot movies are not new. Some, like Hitchcock’s Rope (1948) or 1917 (which won Roger Deakins BSC the Cinematography Oscar in 2019), mask the cuts for the illusion of a single sequence. Others like Russian Ark (2002, shot by Tilman Büttner in HD on a Sony F900) and German crime thriller Victoria (2015, shot over two hours by Sturla Brandth Grøvlen on Canon EOS-C300) can claim to be true single takes. Last Call (2020) upped the ante by filming two 80-minute single takes simultaneously and presented the nail-biting drama in split screen. 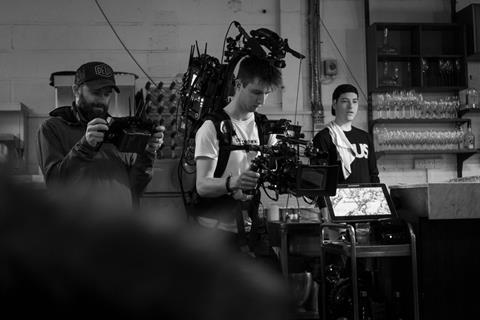 Boiling Point takes the style forward by using a high-end cine camera filmed at 6K. “I wanted the film to look as clean and as cinematic as possible and for the style to be a secondary thought in the audience’s mind,” says Lewis. “We didn’t want them watching and wondering ‘they still haven’t cut, they still haven’t cut’.”

The DP worked with rental house Focus24 to build the camera package. The original idea for Alexa Mini was changed to Sony Venice when Lewis realised the advantages of the camera’s Rialto extension system. The Rialto permits the separation of the sensor block from the camera body allowing Lewis to hand hold the sensor, lens and matt box while carrying the bulk of weight on his back. He shot with a 32mm Zeiss Ultra Prime.

“If all that weight had been in front of me it would have been near on impossible,” he says. “With the weight on my back I felt balanced, and it made the duration doable.”

Another plus was being able to hot swap cards live. The camera’s dual media cards were each capable of recording about 42 minutes of 6K Raw but this still meant having to exchange one of them during the take.

“It was a nerve-wracking experience for our loader who had to pull one card out and put another one in,” Lewis says. “We recorded only 5 minutes on that third card but it was needed otherwise we’d have had to restrict the performance.”

We’re all familiar with Gordon Ramsay’s Hell’s Kitchen, but Boiling Point aims to shine a light on mental health and addiction in the hospitality industry. These are issues which Barantini, a former head chef, knows only too well. 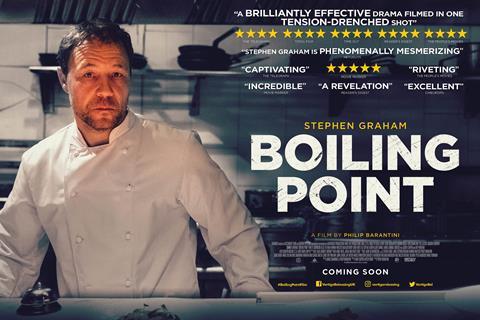 “I worked in kitchens for 12 years prior to filmmaking and I knew this world was ripe to explore on film,” he says. “My idea was for the story to be set in a kitchen and for it to be erratic and fast paced with overlapping dialogue. I could picture it all in my head, how the characters should move.”

“I purposely didn’t want to write any specific dialogue [for Boiling Point]. Just bullet points about what needed to be said at what point. There are no scenes as such just one free flowing long script. The idea was to workshop with the actors until we pretty much solidified the dialogue.”

Lewis and the sound team were also part rehearsals helping to shape the script. “I had to bear in mind where I was going to be at all these points in the dialogue and point out what would work and what would not,” the DP says. 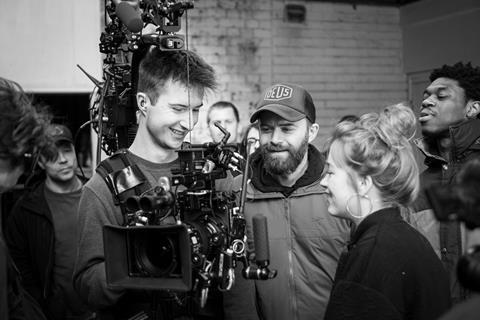 The focus puller, three sound recordists and three boom operators were among those having to move behind Lewis in coordinated dance.

“Matt and I had choreographed his moves before the actors came in to film,” Barantini says. “We knew the moves inside and out; we stayed in the same apartment for the whole time since we wanted to be in each other’s pockets.”

Adding authenticity, the production used a working kitchen at a Jones & Sons an actual restaurant in Dalston where Barantini used to work as chef and which is run by Andy Jones (after whom Stephen Graham’s character in Boiling Point is named).

“I knew the layout like back of hand,” Barantini says. “It’s a perfect open plan space for this film.”

The location also aided Lewis’ fluent camera work. He says, “Had the story had separate spaces for kitchen and dining area it would have meant a lot of travel time, a lot of going through doorways and it would have killed the energy. Having over the top of the counter interactions between the restaurant and the kitchen staff worked well.”

Teradek receivers and 37 radio mics were buried all over the ‘set’ with the video feed daisy chained back to the nearby video village. Even so there was one moment, when Graham is outside, where the feed wouldn’t extend to Barantini’s monitor. He used a handheld monitor walking behind the camera and then ducked behind a false wall to monitor the rest of the film on a 17-inch screen “nervous, sweating, feeling powerless.”

He says, “I had a walkie talkie straight into Matt’s ear but I didn’t want to use and disturb his concentration.” 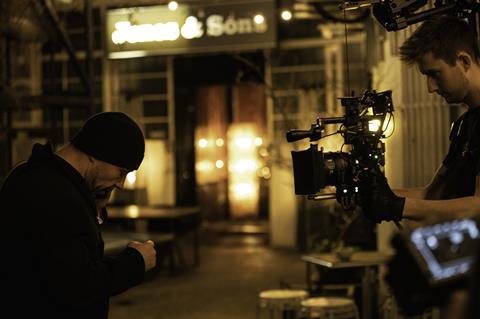 A disadvantage to shooting in a working kitchen was the limitations it placed on lighting. Rather than ripping out fixtures, gaffer Max Hodgkinson had to get creative. He hid as many lights as he could and used practicals such as heat lamps. He also rigged soft sources on the ceiling over areas where key action was going to happen. Those sources were rigged to a dimmer board which he could control live.

“Max was dimming down areas as we left frame and lifting up the light as we got to certain other spaces,” Lewis explains. “These were subtle changes, not enough to pull your eyes away from the action. If you’ve got light everywhere it will feel flat throughout and I wanted it to feel contrasty even though we couldn’t shape the light that easily.

Exterior shots of actor’s walking were illuminated from the headlights of Lewis’ car.

“At beginning of the film we walk through an area we had no way of lighting,” he explains. “It was open to the public so we couldn’t put massive lamps outside. We designed the route so the actors pass under a street light. It was a matter of working with the environment we had.”

They both commend focus puller James Woodbridge for keeping the whole 90-minute shot sharp. “There’s just one moment where it drifts and that’s because he lost the feed for a minute or so and he was guessing. He was gutted about that but no-one who has seen the film has picked up on it.”

Eight 90-minute takes were planned over four nights in March 2020 but Covid intervened. Not only had one of the actors tested positive and had to be replaced at the last minute, with the first day’s takes in the can, they were informed by the producers that they would only have one more night before being forced to shut down.

“With that in mind we all stepped up our game,” Barantini says. “The fourth and final take was technically perfect but the first take of the second night was the one we used in the end because it had the best performances.

“The sound team, costume dept and all our crew had the same attitude and certainly Stephen Graham who was the biggest champion of it all. He would rally all the actors and say ‘I am not the lead. This film isn’t going to work without all of us together.’” 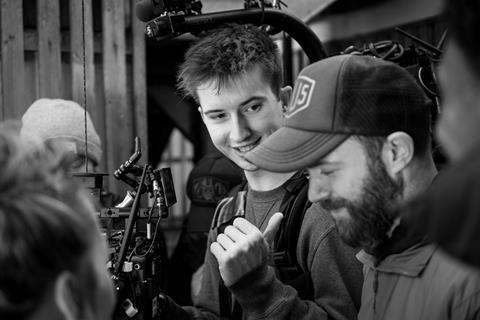 Critics have hailed the result. Screen International called the one-take approach “appropriate and organic, rather than gimmicky or stunt-like” recognising that “the full impact of [Lewis’s] widescreen cinematography and camera-operating, clearly pulled off via virtuoso choreography and blocking, only dawns after the picture is over.”

Lewis says he aimed to create a constant flow between characters so you never feeling like the camera is wandering by itself; a criticism that could be levelled at the Oscar winning single-shot drama Birdman (2014).

“As soon as you notice a camera walking down a corridor trying to find something you get pulled out of the story,” he says. “You’ve got to keep the action busy. It was lassoing to someone and swinging around to someone else – like pinballing between people to distract the audience from the one take. As much as I want people to be raving about it, I’d be really concerned if they were and not talking about the story.”

Boiling Point is produced by Burton Fox Films and released on 30 December through Vertigo Releasing.