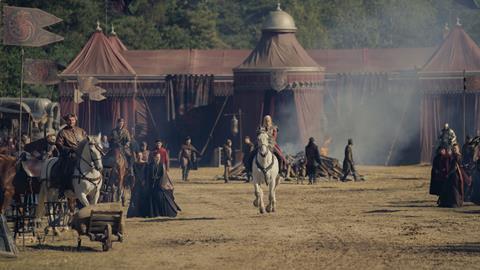 Behind the Scenes: House of the Dragon

House of the Dragon has been a massive success for HBO Max. It was the number one or two show worldwide every day from its debut in August through the end of October, and it also caused a resurgence of audience demand for the original Game of Thrones.

Based on George R. R. Martin’s book Fire & Blood, the ten-part fantasy follows a succession fight amongst the Targaryen court 172 years before the birth of Daenerys Targaryen and the events of Game of Thrones. 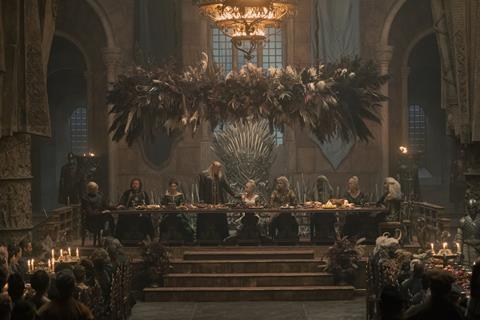 Miguel Sapochnik and Ryan Condal co-created and were the showrunners, basing the studio portions of the show on massive sets at WB Leavesden augmented with location shoots principally in southern Spain with additional work in Portugal and Cornwall.

Surprisingly perhaps, the production reigned in used of Virtual Production though it was the first show to film on the V Stage at Leavesden. Its use here was more as testing ground in anticipation of heavier work during season 2.

VFX work was extensive. MPC took charge of around 1000 shots, about two thirds of the total with Pixomondo (recently acquired by Sony Pictures) handling assets for use in the Volume (mainly of dragon riding scenes). The facilities shared work on the opening sequence of episode one where Princess Rhaenyra and dragon Syrax fly over King’s Landing.

“The King’s Landing environment was a huge task,” says Mike Bell, Visual Effects Supervisor at MPC who worked to overall VFX Supervisor Angus Bickerton. “In Thrones its scale tended to be rendered using digital matte paintings but the producers decided they wanted a full CG asset including all relevant building - Red Keep, dragon pit, tournament ground, and tens of thousands of buildings.”

House of the Dragon: Building a city

“The thinking was that they could place a camera anywhere in King’s Landing and have a fully textured environment. That almost future proofed it, for not just extra wide shots but also views from windows such as from the king and queen’s chambers.” 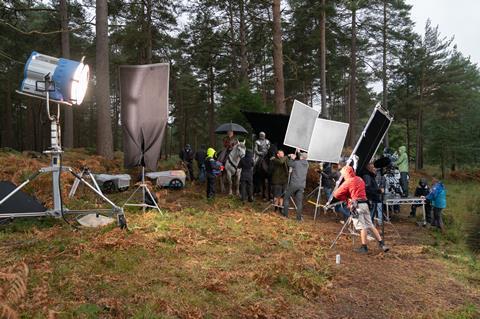 Behind the Scenes: location shoots included Spain, Portugal and Cornwall

King’s Landing had been iterated over many episodes of Game of Thrones. There existed a general layout of the main buildings but it wasn’t so fixed in stone as to stifle creative freedom to play around with it.

“Since House of the Dragon take place centuries before Game of Thrones we needed to imagine what it would be like and how it would develop into the cityscape audiences know from GoT.”

In general, the brief was to keep it smaller with the majority of buildings no more than two storeys high. The production team, guided by Martin’s original books, had developed maps and a history and folklore to King’s Landing down to detailing the demographics of which strata of population lived where.

“Within the exterior city walls would be almost a residential part for people who work for the castle, dragon keepers would have houses around the Dragon pit, and there was an area for the Flea Bottom slum,” Bell says.

From a previz layout of roads Environment Supervisor Matt Dicken developed a procedural model for house placement. “The key buildings had their own bespoke model but for the thousands of houses we built about 30 types with variations in rooms, texture and window placement,” Bell explains. “Matt developed a way of placing these in areas between the roads so it gave you a good idea of how the streets would look at different angles.”

Read more The best of Behind the scenes

On first inspection Kings’ Landings’ urban planning seemed a little too organised so they adjusted the modelling to squeeze some houses together as if they’d been more organically and haphazardly built over centuries. 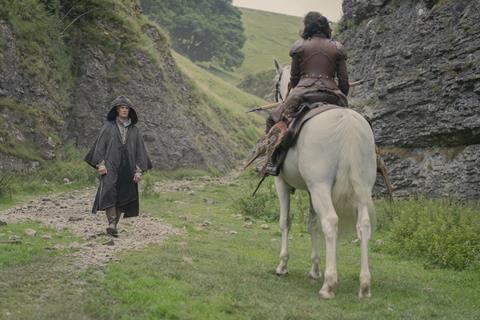 Behind the Scenes: Matt Smith as Daemon Targaryen in House of the Dragon

“The idea was that each house only relates to the one next to it. By offsetting them and changing the angles to become more of a living breathing old city.”

For ‘drone’ style city flyovers or close-ups of dragon Syrax in the opener, the team dressed the streets purely for camera. This included modelled market stalls, blankets, braziers, hanging washing out of windows, flags and dust – anything that might layer in the feeling of a lived-in city.

“Miguel wanted King’s Landing to be kind of darker, grittier, dustier than Game of Thrones– not quite as developed. Maybe the streets are not as cobbled. Every single city shot had fx dust and floating atmospheres added a haze.”

Much of this work may only be discernible to the environment modellers and artists themselves but knowing that attention to detail is there counts.

The CGI was modelled in Maya and procedural movement in a combination of Houdini and Maya. Street level plates involving actors were mostly shot in Cáceres, Spain with occasional matte paintings over some modern facades.

House of the Dragon: Dragon birth

MPC’s other main task was to create the series’ fleet of dragons. This proved more complicated than simply designing an authentic looking creature. Each had to fit the narrative with a personality to mirror that of their rider. 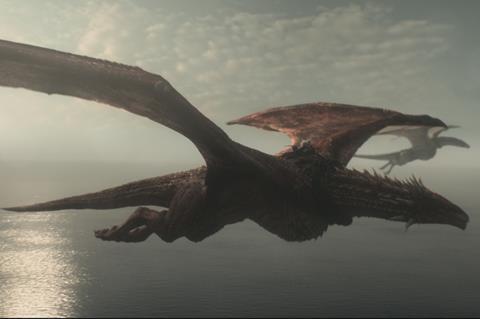 Behind the Scenes: one main task for MPC was to create the series’ fleet of dragons

We learn in House of the Dragon that Targaryen royalty have a dragon egg placed in their crib at birth. The idea is that the power of the house Targaryen derives from the bond between rider and dragon that doesn’t break until either of them dies. The bond means the dragon takes on some of the persona of the rider, or possibly vice versa.

“Caraxes is probably the most complicated creature and unique,” says Bell. “Caraxes takes on a lot of Daemon’s character. Its unpredictable, dangerous, we don’t know what it is thinking. We both like and are scared by him.”

In Sapochnik’s notes for Caraxes he referenced his pet lurcher dogs. “When you see them lying down they appear awkward but they can clearly run very fast. Likewise, when Caraxes is on the ground it should feel a bit awkward because it is bred for flying and be more serpent-like through the skies.”

The VFX team compiled Top Trump style cards for each dragon as a ready reference for their individual characteristics.

Meleys whose dragonrider is Princess Rhaenys “is older, more battle scarred, matriarchal and regal to the point where her horns resemble a crown.”

Syrax is younger and playful to match the zest of Princess / Queen Rhaenyra. Seasmoke, ridden by Laenor Velaryon is a pale, silver-grey dragon “more stealthy, creepy and hunched.” Vermax the young dragon of Prince Jacaerys is also small ‘Velociraptor sized’ with the faster sharp movements of a lizard. “I had a pet iguana as a kid and kept thinking of how it moved when it felt threatened,” says Bell. 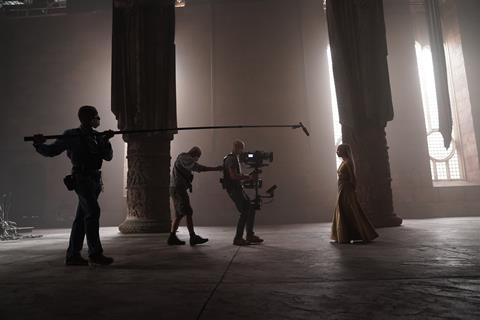 Behind the Scenes: Milly Alcock as young Rhaenyra Targaryen

They also researched birds of prey, notably vultures, noting the way their heads tilt and their eyes always have seem aware of threat. “You can see this clearly in Ep6 where the young princes are training Vermax in the dragon pit. Vermax is always focus on them, questioning who these two are - should I attack them?”

MPC also designed the interior of the dragon pit for this scene. Bell was on set for the shoot, which filmed on 360-degree blue screen and noted that Bickerton, the director and others were using a hololens-style VR headset in order to previz the scale of the dragon in shot.

“This dragon was huge. It’s not just a green ball on the end of a stick to judge eyelines. The VR was useful in showing everyone a sense of scale.”

House of the Dragon: Battle of Stepstones

MPC was also behind the battles in Episode 3 involving Daemon’s (Matt Smith) attempt to beat the Triarchy pirates and then to ambush and attack them to kill their leader, Crabfeeder. Both battles are set on the stony Stepstones beach using plates filmed on Cornwall’s Kynance Cove. 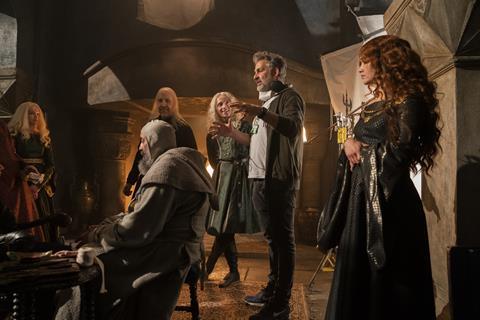 Behind the Scenes: House of the Dragon, featuring (L-R) Paddy Considine as King Viserys, and Olivia Cooke as Alicent Hightower

This episode’s first scene set at night shows Daemon attacking the Crabfeeder’s army on dragonback, but being repelled by archers shooting flaming arrows. The majority of this sequence is full CG.

“It was an interesting idea to build a full environment then throw it into darkness and have it lit with bursts of fire from the dragons,” says Bell.

CG work included two dragons, redesign of the quarry to which the Triarchy retreat, digi-double of Daemon on top of Caraxes and plates for his closeup, CG debris on the beach, digi-double archers, simulated arrows and dragonfire.

The daytime climatic battle scene was shot on the backlot at Leavesden augmented by CG environments. This is an epic fight where Daemon is basically a one-man army hacking his way to Crabfeeder. The studio didn’t have the space for the entire length of shot required so a third of the beach section was built and then redressed over a period of six days, each day filming Daemon moving further inexorably toward Crabfeeder.

The Mill worked exclusively on sequences showing the decay of King Viserys (Paddy Considine) from a mystery illness. The intent was to make Viserys look emaciated. The makeup artist had prepared the ground and Considine wore a green patch on his cheek during shooting where VFX would carve a hole plus another for the socket of his eye.

“It was really important that the emotion of that episode and of Paddy’s performance were kept intact and not detracted from,” Bell says. “We made sure to keep his eyes, mouth and nose and tried to retain as much of the plate as possible.”

Viserys’ skin was warped in 2D and further colour grading and contouring of the jaw line and sucking in of the temples completed the effect.

“When the audience see him in bed like this, we want them to be shocked. The producers look out for the reactions of the reveal of storylines like this online.”

That one worked but while the show was being rolled out and there was a moratorium on BTS articles like this, all the internet seemed fussed about when it came to VFX was the green tape on a couple of King Viserys’ fingers that some Smart Alec with a pause button had spotted in Ep3. 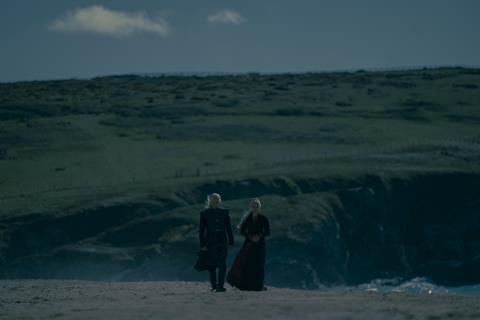 House of the Dragon: Matt Smith as Daemon Targaryen and Emma D’arcy as Princess Rhaenyra

Bell says that wasn’t one of theirs – but it made them doubly more cautious to get everything right. He thinks it was a VFX shot that never made it to the VFX team involved, slipping through the editorial net.

VFX supervision was based in London close to the client while MPC teams in Montreal carried out most of the animation along with some FX sims, composites and lighting. The majority of matchmove, roto and comping was led out of MPC’s India office.

Bell has worked on shots for shows where the job is to create one single asset and on productions like Dragon which requires a variety of different creative techniques.

“You need to be smart about who is doing what and which teams are specialising in water for example, those in environment builds or dragons. It’s such a massive team effort involving hundreds of people across three continents. The pipeline and the deadlines are such that all disciplines are happening in parallel. My job to corral it, refine and it slowly funnel everything together.”