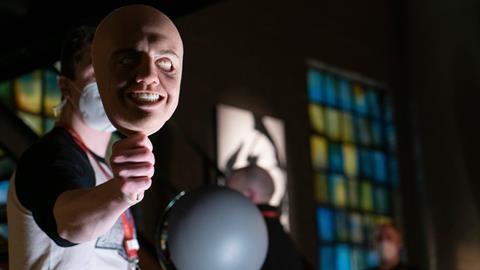 Behind The Scenes: The Sandman

“Dreams are real. But they are made of viewpoints, of images, of memories and puns and lost hopes…”

It’s considered one of the great graphic novels of all time, and now it’s finally made it to the screen. As author Neil Gaiman puts it, arguably The Sandman could only have been made now that technology and budget make its hugely complex world building possible.

Neil Gaiman: Creator of The Sandman

“Technologically, I really think we’re in a place right now where we’re getting to make Sandman in a way that we could not have dreamed of making even 15 years ago, even 10 years ago,” Gaiman says. “Longer format, novelistic television series now have the special effects and budgets to bring this world to life. So, it’s now possible to make Sandman, but not easy.”

The right time to make The Sandman

The story behind the repeated failures to adapt The Sandman is almost as epic as the comic series itself. There have been several doomed attempts since the book was published in 1989 including a movie from rights owners Warner Bros in the 90s. 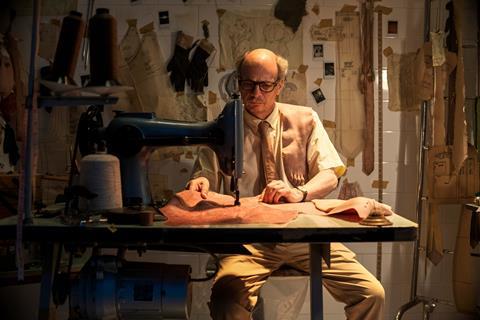 The Sandman: Kerry Shale as Nimrod in episode 110 of The Sandman

“For well over 30 years, my part in Sandman adaptations was just to try and stop bad ones from happening,” Gaiman says. “And fortunately, I was always successful in this.”

His masterwork is credited with establishing the graphic novel (along with Alan Moore and Dave Gibbons’ Watchmen in 1987) in the mainstream. The French and the Belgians have long accepted bandes dessinee as artistic works; the US revered the DC/Marvel superheroes and the Japanese exported manga to the world; but the Brits were always a little sniffy about comics.

Perhaps it was something about the heavyweight issues of life, death, immortality and the classical Greco-Roman mythology of The Sandman that caught people’s attention.

A story that spans epochs

The Sandman is pretty intellectual stuff with references to Shakespeare, Christopher Marlowe and Robespierre and Marco Polo, Cain and Abel and Lucifer. Its central realm, the Dreaming, is like Narnia, Middle Earth and Hogwarts rolled into one, but even more complex, dark and magical. The story spans epochs, dips in and out of real and dream worlds and has a cast of thousands. 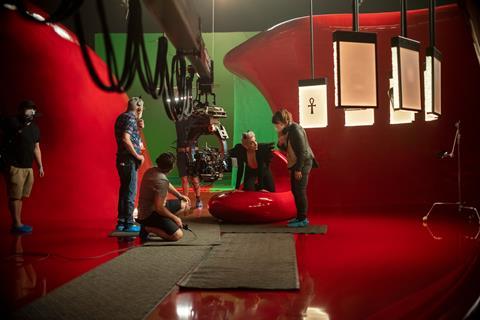 The Sandman: (L to R) Mason Alexander Park as Desire, Director Louise Hopper in episode 110 of The Sandman

Trying to cram a story of such magnitude into a feature film, or even a series of features was never going to work. By 2020 it was the biggest DC comics property that still had not been adapted. Gaiman’s other works like American Gods and Good Omens have been adapted for TV.

The ten-part Netflix adaptation of The Sandman has been acclaimed by fans and critics alike with the most obvious reason being that producers Heinberg and David Goyer have allowed Gaiman to contribute a critical creative role.

Or as Gaiman says, “This adaptation is the first time that I’ve been willing to come on board.”

The Sandman. (L to R) Gus Gordon as Paul McGuire, Tom Sturridge as Dream, Laurie Kynaston as Alex Burgess in episode 101 of The Sandman

He exec-produces and co-wrote the pilot as well as had a hand in casting Tom Sturridge as the story’s protagonist Morpheus, also known as Dream.

Working from the original comic scripts

Perhaps because of Gaiman’s involvement the team decided to go back to the very beginning; not to the visuals of the original comic, but to the author’s text, which he wrote before an artist had drawn a single panel. 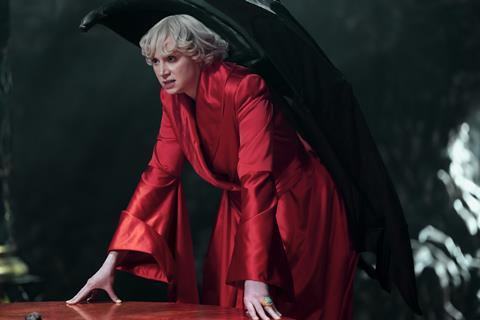 The Sandman: Gwendoline Christie as Lucifer Morningstar in episode 104 of The Sandman

“In terms of my prep, one of the things that Allan provided me with, which was gold, was the original comic book scripts from Neil Gaiman,” says VFX Supervisor Ian Markiewicz. “Not the comic books, not the drawn panels, but the scripts he wrote for the artists [where] he described what he was trying to get at.”

Other than the comic books, the major touchpoints for the creators were the films of Michael Powell and Emeric Pressburger, notably A Matter of Life And Death.

“Sandman needs time… You need space for a big story. You need time to care about characters.” - Neil Gaiman

“Starting with Neil’s notes was the perfect way for us to think about adapting the show,” Markiewicz continues. “Because sometimes the comic book panel is very comic book-y, and it has that wild, quirky, zany quality, which I don’t think the show has all of that much.” 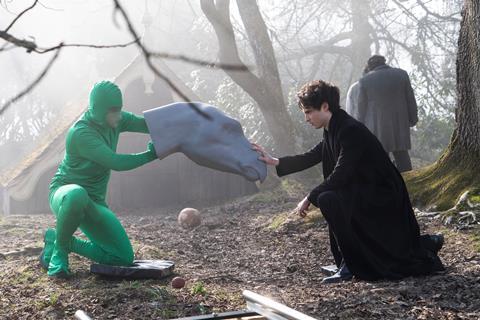 Behind the Scenes: Tom Sturridge as Dream in episode 102 of The Sandman

Mirroring the episodic nature of the comic itself, each instalment of the Netflix series is self-contained, shifting between time periods, settings, and genres even as it tells a cohesive larger story. Episode one is a period piece. The second is set in the realms of Dreams, the third in contemporary London. Other episodes are set in Hell and an American diner.

“One of the big challenges on this show is just every episode [is different],” Markiewicz adds. “Each episode has new main players, it has new locations, it has new bit characters, and new additional background. It’s set at a different time [with] a new wardrobe.”

A natural fit for long-form television

Season One of The Sandman on Netflix is basically the first two graphic novels — Preludes & Nocturnes and The Doll’s House – but the sheer scale of the opus which ran to 75 issues immediately begs the question of what to leave out?

The Sandman: Mason Alexander Park as Desire in episode 107 of The Sandman

“And if you do you throw that stuff out, is it still Sandman?” Gaiman wonders. “Because if you lose ‘A Dream of a Thousand Cats,’ if you lose Shakespeare, if you lose the serial killers’ convention, if you lose the Midsummer Night’s Dream sequence, suddenly it’s not Sandman anymore.

The episodic nature of television may have been a more natural fit for the source material but panels sstill have to be adapted into scenes; short, digressing stories – like Death and Dream making a man immortal for a laugh – have to be folded into hour-long scripts. 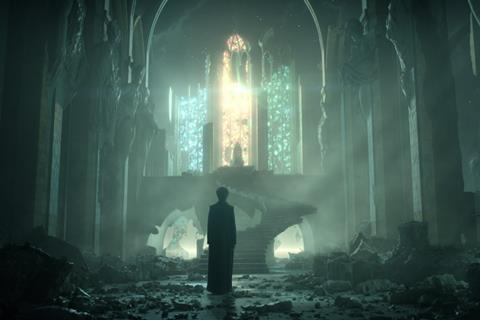 The Sandman: Tom Sturridge as Dream in episode 102 of The Sandman

“Sandman needs time,” Gaiman explained to the BBC. “If somebody had ever tried to make a movie of Game of Thrones, that wouldn’t have worked either. You need space for a big story. You need time to care about characters. In Sandman season one, we have 340 speaking parts. That’s an awful lot of people to get to know and we’ve only just begun. We have adapted, so far, 400 pages out of 3,000.”

But where one panel can say so much on the page leaving the viewer to interpret and imagine and expand the world, the TV production needed to actually nail the visuals and, in most cases, physically build them on stage.

Gaiman says the key was not to adopt a literal interpretation but to identify the most important feeling in the material, and then find a way to translate that feeling visually. For example, in the story where Dream and Death take a walk together in New York the realism of being in New York wasn’t nearly as important as creating the sense of a park, with city life going on just at its edges.

The Sandman: (L to R) Vivienne Acheampong as Lucienne, Nicholas Anscombe as Merv Pumpkinhead in episode 107 of The Sandman

“We’re dealing with things that are so subjective,” says Markiewicz. “It’s about dreams. It’s about Hell. Everyone has their vision of what that thing should be. And in some ways, we can never hope to achieve what that is.”

The Sandman looks exactly how its creators want it to

Much of the show’s surreal dream states are rendered with skewed aspect ratios – a distortion that seems distracting to some viewers. The stretched nature of the visuals has caused much discussion, but as Variety reports it’s a “deliberate creative choice, giving it the surrealist feel of a dream. In short, The Sandman “looks exactly how its creators want it to.”

Other titbits that fans may enjoy, such as: 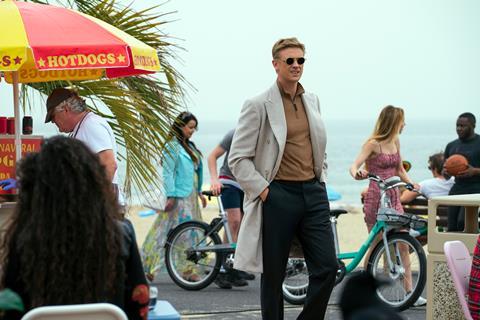 The Sandman: Boyd Holbrook as The Corinthian in episode 108 of The Sandman

The Science fiction and fantasy genre is enjoying a bit of a renaissance right now. The longer length canvas of TV combined with state of the art VFX have made the depictions of outlandish worlds and events more practical. The Sandman is shrewdly timed to release ahead of HBO’s Games of Thrones’ sequel House of the Dragon and Amazon’s monumental retelling of The Lord of the Rings.

Go behind the scenes of the best TV and film productions with IBC365. From Avatar 2 and Top Gun: Maverick, to Stranger Things and Marvel’s Hawkeye, browse the Behind The Scenes archive.