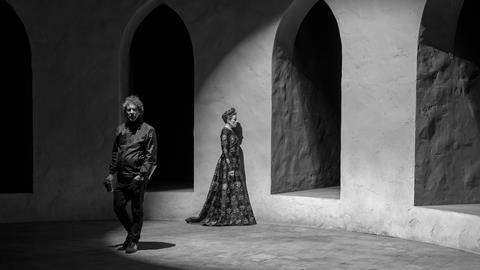 Behind the Scenes: The Tragedy of Macbeth

Writer and director Joel Coen’s latest project is an adaptation of Shakespeare’s Macbeth which will be available to stream on Apple TV+ on January 14. Cinematographer Bruno Delbonnel explains how it was shot.

If you go along with the idea that Macbeth is the original gangster or that Lady Macbeth the archetypal femme fatale, then it’s only natural that the masterminds of Blood Simple, Fargo, Miller’s Crossing and The Man Who Wasn’t There would one day adapt the Scottish play. 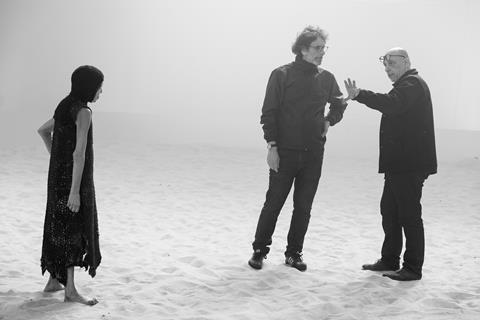 In the event it is only Joel Coen in the writer-director’s chair for an intensely stylised, studio-bound and austere reimagining of Shakespeare’s bloodbath.

The mise-en-scène is composed of light and shadow on geometrically exact sets in stark black and white, very much like the German expressionism that influenced American B-movie thrillers of the 1940s.

Yet according to cinematographer Bruno Delbonnel, ASC, AFC the director never mentioned this to him.

“He was much more interested in the humanity of the story,” he tells IBC365.

“In the play, Macbeth and his wife are a younger couple but in this version they are older and they can never have children. Macbeth is jealous of Banquo for having a child [and heir to the throne if the Witches are to be believed]. Yes, it’s about bloody murder but it’s also about the mortality of being barren.”

There have been four previous filmed versions of the play which Coen and Delbonnel reviewed as part of their prep. These were versions directed by and starring Orson Welles in 1948; by Akira Kurosawa in 1957 as Throne of Blood; by Roman Polanski in 1971 and pointedly his first film after the Sharon Tate murder; and most recently by Justin Kurzel starring Michael Fassbender and Marion Cotillard.

“With digital you have a longer latitude in terms of exposure [than film] which meant we could play with a wider scale of grey…converting to black and white really helped us push different colour curves in post. I could play with the blue and red curves and change how the black and white looked as opposed to baking in a look on film,” Bruno Delbonnel, cinematographer

According to production designer Stefan Dechant, Coen’s interpretation uses the language of cinema in conversation with the text.

“Joel never wanted to deny Macbeth’s origins as a play so immediately that meant abstraction. Even though he had been talking to theatrical designers he felt he needed a cinematic approach. The imagery and cinematic experience is in dialogue with the rhythms and themes of the text.”

Coen had quickly dismissed the idea of shooting on location. 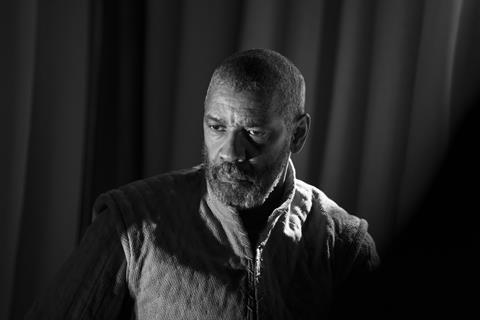 “Joel was adamant he didn’t want to shoot in a real Scottish castle,” Delbonnel says. “He wasn’t interested in that kind of realism. What he wanted was to use the theatricality that you could only have on a set. His vision was always this combination of cinematic images based on the language of theatre.”

With star and producer Frances McDormand they worked on the concept for eight months, stripping back anything deemed extraneous to the icy psycho-drama. Extras are minimal. Colour was a distraction.

“The choice of black and white was a way to help to support the visual language,” says Delbonnel, who shot in colour on ARRI Alexa LF with Cooke S7 lenses and converted to monochrome in post.

“With digital you have a longer latitude in terms of exposure [than film] which meant we could play with a wider scale of grey,” he explains. “Converting to black and white really helped us push different colour curves in post. I could play with the blue and red curves and change how the black and white looked as opposed to baking in a look on film.”

For the look, Delbonnel expressly referenced Murnau’s 1927 romance Sunrise. Another silent era classic, The Passion of Joan of Arc (1928) directed by Carl Dreyer, had a particular baring on Delbonnel’s use of close-ups and austerity of the sets.

“We weren’t copying what Dreyer did so much as learning from the level of abstraction he achieved in this masterpiece and also just how powerful the close up can be.” 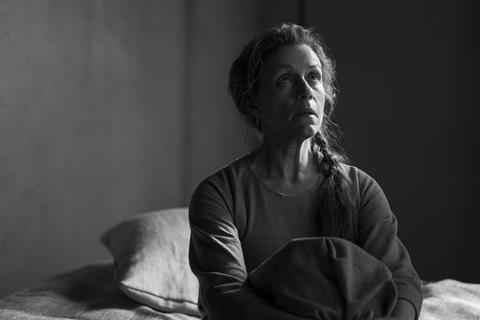 The film is framed in 1.19:1, a near perfect square that deliberately evokes German expressionist filmmakers such as Murnau and Fritz Lang. The same aspect ratio was recently employed by DP Jarin Blaschke for Robert Eggers’ gothic horror The Lighthouse).

“This goes back to what Joel wanted. With this aspect ratio, when you fill the frame in close up, there is nothing on either side to distract you.”

Ingmar Bergman’s The Seventh Seal (1957) contained keys for the lighting design. “Since we were shooting on the Warner Bros. stage it made sense to use theatrical lighting. Everything was saturated in this blue layer on set and I was able to adjust the red or green channel to change the skin tone colour.”

Delbonnel’s camera work is also shorn of ostentatious flourish. “Everything is very symmetrical and in line,” he says. “For example, I place the camera in the middle of corridors, always perpendicular to the wall. Kurosawa said that he only moved the camera when the actors moved. In other words, the movement is driven by a decision of the characters. Does moving the camera help us to change the point of view? I’m not saying we have to follow his rule but the point is relevant.”

The DP, who previously shot the Coens’ Inside Llewyn Davis and The Ballad of Buster Scruggs, worked on the look with Peter Doyle, supervising colourist at Technicolor. In pre-production they concentrated more on costume than the set.

“We did some tests on colour costumes (designed by Mary Zophres) to see how they converted to black and white but it was complicated. You don’t know, for example, exactly how yellow will look when turned into grey so we decided to go with all black and white costumes. That meant we didn’t have to translate everything.” 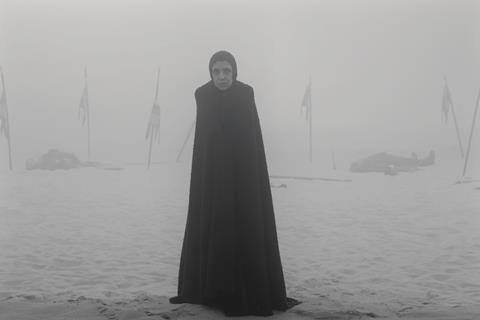 Zophres used the noir setting on her iPhone to approximate how the costumes would look without colour.

When Dechant boarded production, the director and cinematographer had already worked out the stylistic tone of the movie and much of the camera positioning and performer choreography too. That was handy since Dechant only had 10 weeks to design and build 35 sets. By contrast, for Tim Burton’s Alice in Wonderland on which Dechant was supervising art director, he had 14 weeks to set build alone.

“Joel showed me a series of 3x5 prints for inspiration. Some were architectural photography, some were taken by Bruno, others were frames from black and white films or colour stills that had been desaturated to monochrome. You could immediately see the abstraction they were after.

“One of the key pieces to me was by Japanese photographer Hiroshi Sugimoto of the Casa Barragan in Mexico City. It’s a black and white, slightly out of focus photo with a tower and two intersecting flat walls. Joel said ‘This feels like Inverness to me. It’s the idea of a castle rather than being a castle.”

After a series of meetings with Coen and McDormand, Dechant felt he had a firm grip on how the film’s imagery was going to reflect the psychology of a scene. Delbonnel gave further instruction with Photoshopped drawings. Another inspiration was Charles Laughton’s The Night of the Hunter.

The designer’s next step was to sketch models in digital 3D while understanding that sets and backdrops themselves needed a “hand crafted and painterly feel”. 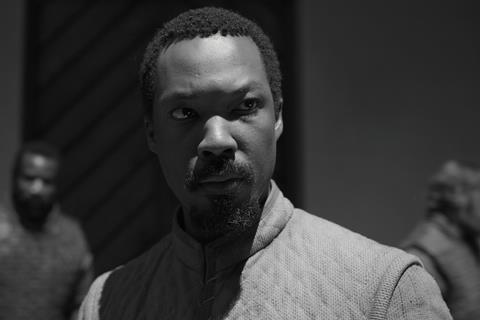 The film is framed in a 1.19:1 near perfect square evoking German expressionist filmmaking

One idea that Dechant picked up on from Coen’s script was the use of repetitive imagery for characters that are trapped and confused.

“For instance, the layouts of stairs at both Inverness (where Macbeth murders the king) and Dunsinane (Macbeth’s stronghold) reflect each other. I also dug into the work of influential theatre set designer Edward Gordon Craig (1872-1966) who had used repetitive imagery, stairs and abstractions for Shakespeare productions.”

The staircases in particular call to mind the optical illusions of M.C. Escher (as do the very final frames of ravens that seem to momentarily tessellate) although Dechant says the artist didn’t figure in their discussions.

“We had talked about rooms having stairs on the side – and you can see a little bit of that in Duncan’s room. Could we take the designs and turn them on their side? It’s the idea of not letting the audience have too much a sense of where they are.”

Similarly, the whole film is layered in a milky white mist. It’s often unclear whether it is night or day. “There’s always an abstraction to your point of view,” he says. “It’s a question of agency. Is Macbeth following along a path pre-described by the Witches over which he has not control, or does he actually have the agency to commit murder?

“To me the literal fogginess represents his inability to see the consequences of his actions. He is receiving these prophesies but he doesn’t understand them or he is misreading them.

The columns and arches of Dunsinane as well as the throne room were conceived as “an alley of trees” and a way of making Birnam Wood seem to come alive, as the Macbeth’s are consumed by madness. 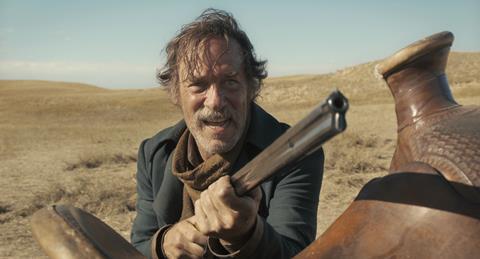 The DP previously shot The Ballad of Buster Scruggs

“Most of the imagery is balanced but when Macbeth sees Banquo’s ghost at the banquet and moves to follow it into the hallway this is the one moment where everything doesn’t line up. The balance is broken.”

The scene that follows this features a room “which has no meaning architecturally,” says Dechant. “I don’t know the purpose of that space other than it works in the film as a physical space to have the Witches’ second apparition in a cauldron. There is an economy to the set, and the props in each space which I think is really interesting.”

The sets themselves are painted various shades of grey with shadows and light literally painted under the arches, and faded out the tops of sets to give the environment depth and dimension when captured in black and white.

“It’s almost pre-lit for Bruno to light on top,” he says. “To do that in a colour environment means dealing with hue and saturation. Here we’re just dealing with the tonal qualities of light and shadow.

“These are sets that really only can exist in camera, when the stage is lit. There was no need to create something more elaborate. The finishing touch of that set is really how light and shadow craft the architecture and the geometry.