Global chip shortages notwithstanding, CES presents the future of space tech and portals to the metaverse.

Although last year’s show was completely virtual, the Consumer Electronics Show is planned as both virtual and in-person in 2022. 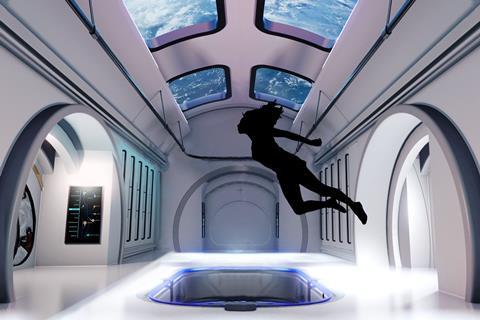 “A lot of people can’t travel or are uncomfortable doing so, especially from China, so we expect a much lower attendance,” said Gary Shapiro, President & CEO, Consumer Technology Association, in a pre-briefing. CES 2019 hosted 180,000 attendees and 4500 exhibitors. For CES 2022, just 1700 vendors have paid for space at the Las Vegas Convention Center.

Nonetheless, the show, which takes place from 3-5 January, is a traditional curtain raiser for the year in tech and usually has some eye-opening gadgets. Trends to watch include wearables that plug into the metaverse, holographic displays and the future of space tourism.

Fuelled by the exploits of Blue Origin, SpaceX and Virgin Galactic, space is an industry projected to grow by over $1 trillion by 2030. CES 2022 inaugurates a Space Tech category with innovations for space tourism, robotics, off-world habitation and mining new resources. 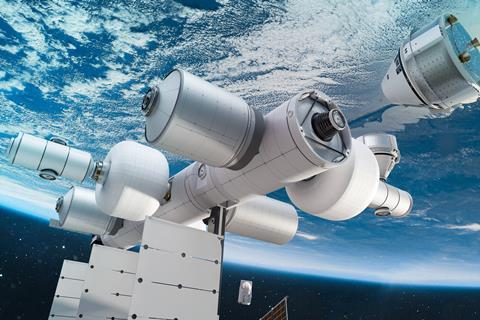 The key exhibitor is Sierra Space which is bringing Dream Chaser, a cargo plane (presumably parked at McCarran International) scheduled to start missions to the International Space Station in 2022.

Orbital Reef will be operated as a “mixed use business park” in space and is scheduled to be ready for customers in the second half of this decade. The microgravity environment could present a lucrative arena for commercial and scientific R&D.

The LIFE habitat itself is composed of materials including “Vectran fabric weave, urethane and nylon fabric” and is designed to inflate in orbit to house four astronauts plus equipment. Multiple LIFE modules will be linked to form the Reef targeting industries including “space tourism and movie production”.

An Astro Garden system is proposed to grow food including tomatoes and cabbage, while a waste management system will compact trash into bricks that can be used for additional radiation protection. 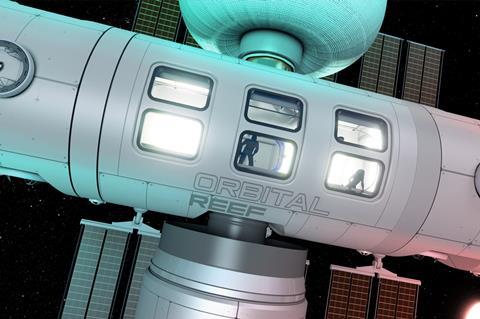 Another CES exhibitor, the US multinational power and energy group Hyperion is working with NASA to develop hydrogen fuel technologies to power electric vehicles. NASA has been using hydrogen since 1958, not least as rocket fuel to deliver crew and cargo to space.

Bosch, another CES exhibitor, has also been working with NASA to integrate artificial intelligence-enabled robotic innovations to help astronauts work efficiently aboard the ISS. Bosch has contributed to AI-enabled robots called CubeRovers that will be equipped and trained to navigate the moon’s terrain.

Alarmingly, the commercialisation of space is already attracting cybercriminals. Cyberattacks on space infrastructure will place human lives at risk, either by causing the loss of communication with Earth or the loss of control of space equipment, according to Maher Yamout, Senior Security Researcher at security company Kaspersky.

He says cybercriminals that manage to infiltrate the ground segment could also establish so-called “kamikaze satellites”, which could be instructed to crash into technology deployed in orbit.

Back on terra firma the more prosaic issue of semiconductor shortages hover over the entire consumer electronics industry. It’s the reason why Samsung is spending £12.7 billion to build a new semiconductor factory in Texas but this won’t be operational before the end of 2024.

The chip shortage has become a significant business obstacle. Shutdowns during the pandemic have hampered production of new vehicles and electronic devices for more than a year.

According to The Guardian, national security has also become an issue because many US companies are dependent on chips produced overseas, particularly in Taiwan, which China claims as its own territory.

Nina Turner, a Research Analyst at research firm IDC, said it was “a concentration risk, a geopolitical risk” to be so reliant on Taiwan for much of the world’s chip production.

2022 is set to be a huge year for digital currency and avatar launches, reflected at CES which has a new NFT and Digital Assets programme. 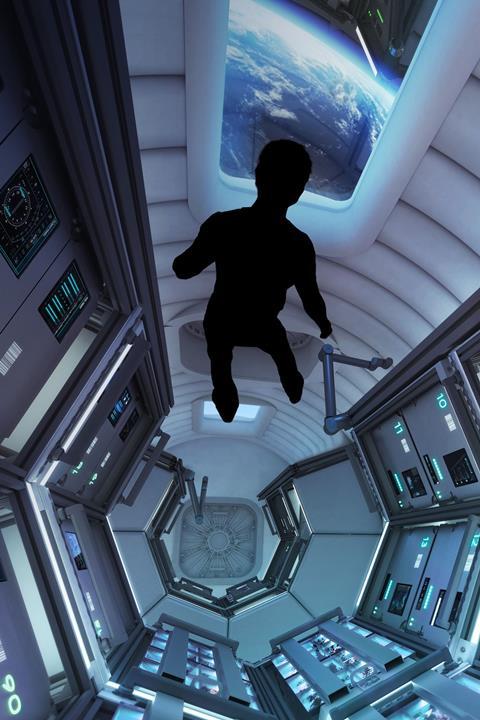 “Market players are developing virtual worlds at scale, with the aim to grow digital commerce, gamification and 3D avatar economies,” suggests forecaster WGSN. “Avatars, or digital twins, will allow consumers to adopt new identities that might be truer versions of themselves. Innovative hardware will realise the metaverse and lead consumers to further blend the digital and physical across their lives.”

Cryptocurrency initiatives including non-fungible tokens (NFTs) and other blockchain-based digital collectibles will also be liberally sprinkled among show announcements.

AR/VR/XR and all things metaverse is the overriding theme at Digital Hollywood, a CES-related conference featuring speakers from WarnerMedia and Discovery among others.

The single biggest impediment to mass user adoption of the 3D internet – otherwise known as the metaverse – is the clunky experience of VR and AR wearables.

Expect numerous companies at CES to address this as newer generations of smart glasses come to market next year. In the meantime, the Vuzix Shield, honoured with a CES 2022 innovation gong, is claimed as the first binocular AR smart glasses fitted with HD stereo cameras.

The metaverse is conceived as a shared, persistent digital environment where users can work, shop, go to concerts, or just hang out. For that to happen rival vendors need to work together on making devices like headsets and phones compatible.

Qualcomm is staking its claim to be the glue. Its Snapdragon chips already power AR/VR headsets including Meta’s Oculus and Microsoft Hololens and are inside many smartphones including Samsung’s Galaxy S21. Now it has developed software called Snapdragon Spaces which will use the phone’s processing power and mobile connection to drive AR/VR experiences on glasses.

Likely to debut at CES are phone-connected glasses from Lenovo, Motorola and Xiaomi. Spaces includes an SDK for developers to build AR apps and this supports Epic Games’ Unreal Engine and Niantic’s Lightship developer platform.

“What Snapdragon Spaces will achieve for people with AR glasses indoors complements our goal for developers to build planet-scale AR applications on multiple devices and form factors,” said Niantic CEO John Hanke in a quote provided by Qualcomm.

Ted Schilowitz, Futurist at ViacomCBS, is also quoted: “Snapdragon Spaces unlocks great opportunity for a new, headworn AR future where entertainment will go beyond traditional screens and offer a new space to entertain, inform and empower our audiences.”

However, Qualcomm doesn’t yet have iOS devices signed up, with Apple rumoured to be lining up its own smart glasses entry for the back end of 2022.

8K TVs account for just 0.2% of all TV shipments and sales will remain slow for at least another five years, according to analyst firm Omdia. It expects a paltry 9 million households worldwide to own an 8K TV by 2025.

Nonetheless, 8K tellies remain the flagship product of Samsung, Sony and LG, while TCL has already been awarded a CES 2022 Innovation Award for its 85in flatscreen X925 Pro TV. 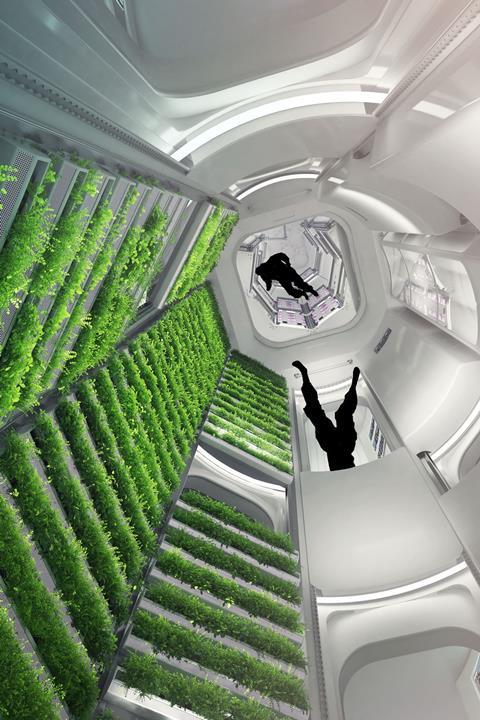 Chinese TV brand Skyworth also landed an award for its new W82 display, which is claimed to be the world’s “first mass-produced transformable OLED TV”. The 8K 120Hz TV is fitted with a flexible OLED display panel, which means it can be adjusted from a flat screen to curved.

Samsung will present the latest of its TVs fitted with QD-OLED panels, which is a hybrid of OLED and QLED display technology on which it has reportedly spent $10 billion developing since 2019. Samsung claims the tech combines OLED’s high contrast capability with QLED’s colour enhancement, but a 65in screen could cost even more than the company’s 8K QLED flagship QN900A 8K TV which is retailing for £5000 (65in)

If 8K rectangular black plastic screens feel a bit 20th century, then CES can usually be counted on to showcase more exotic formats, such as holographic and transparent TVs. Notably Light Field Lab has started production on a technology it calls SolidLight, which is designed to produce real-life hologram visible to the naked eye without any headgear. Its prototype does this by projecting light across a 28in diagonal panel for a combined total of 2.5 billion pixels. The firm envisions holographic video walls comprised of these smaller panels, with upward of 245 billion pixels. Backers include Samsung, Comcast and Verizon.

In recent years CES has become something of an auto show as the car market has shifted from vehicle hardware to software enabling everything from autonomous driving to in-car entertainment. A massive new West Hall of the LV Convention Center features Daimler, Fiat Chrysler, General Motors, Hyundai and BMW.

In a keynote, GM Chair and CEO Mary Barra will emphasise electric vehicles and in-car services that can personalise the driving experience.

Air taxis, or autonomous urban air mobility (UAM) vehicles, are also expected to buzz. The UAM market is on track to be worth $1.5 trillion globally by 2040 according to Morgan Stanley Research with Dubai launching the world’s first (crewed) fleet in 2022.

Taking a ride on one of these luxurious vehicles will also not be cheap. For a 15-minute flight reckon on spending $200-$350.