86% of vendors report impact on financial sustainability if shortages and high prices exist for another 12 months, reports IABM, exclusively revealed by IBC.

It’s the worst kept secret in the industry, but few manufacturers are prepared to talk about it openly. The supply chain shortage, which has dragged on for over a year, not only shows no sign of abating but has gotten worse. The impact on broadcast technology vendors is near universal with an alarming 63% of them reporting severe problems in sourcing components as of this month. 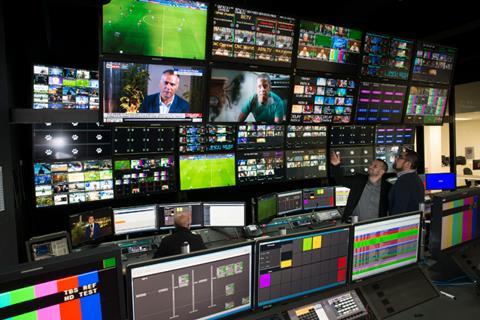 Hundreds of thousands of components combine in mission-critical broadcast operations centres, like this one which is part of Telstra

According to a new industry survey conducted by the IABM – exclusively revealed by IBC365 – the stranglehold on the supply of key product components such as semiconductors is affecting 97% of vendors, with 63% flagging this as severe. That’s up from 40% of vendors in April 2021, when the IABM first polled its members.

An alarming 40% of businesses warn of a severe impact on their financial viability if the issues are not solved in 12 months. Some 86% of companies will experience moderate or severe problems if conditions persist.

“It’s not just chips but motherboards and also a wide-ranging number of other components,” Lorenzo Zanni, IABM

“The findings of our first survey on supply chain problems with electronic components last April painted a worrying picture for our industry,” says Peter White, CEO, IABM. “The results of this follow-up survey demonstrate that the position has deteriorated further in the intervening months, and will result in significant financial impact if the problems continue for the next year.”

Lead times have been most affected by the disruption, with companies reporting on average a 74.1% increase compared to usual. Anecdotal evidence suggests prices have soared by 30-50% in the last year for certain components and this is confirmed by the IABM survey which pegs inflation at 44%.

Some of this cost is being absorbed but margins are being cut and average prices of final product are now up by over 25%. 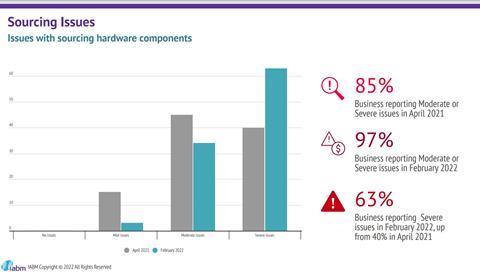 Microprocessors of all types and power devices seem to be the most limited in supply, reports one vendor. “It’s not just chips but motherboards and also a wide-ranging number of other components,” says Lorenzo Zanni, IABM Head of Knowledge, who conducted the survey.

White says: “There is evidence of component price increases which will either need to be absorbed by media tech suppliers or will feed through into increased end-product prices.”

He adds: “With no early prospect of the component shortage problem being resolved, many media tech companies have responded by redesigning their products to mitigate issues with sourcing specific components, and/or stockpiling components where possible to keep their production lines flowing in the face of dramatically increased lead times.”

For example, Harmonic revealed in an earnings call that its inventory grew to $71.2 million in Q4 2021. The last time the value of its inventory was so high was in 2011 when tech supplies were affected by a tsunami in Japan.

Holding more stock is a means to cushion a company against irregularities in the supply chain but it also means that the company has millions of dollars’ worth of stock on its books rather than funding the business. It also has the knock-on impact of draining more supply from the market.

“It is the bigger companies who have the economies of scale to be able to do stockpiling,” says Zanni. “It’s similar to the early days of the pandemic when people overstocked on toilet paper at home.”

Patrick Harshman, President and CEO of Harmonic, spoke of “continuing to contend with supply chain challenges” in the firm’s Q4 earnings report on 31 January 2022, “which means that our current outlook for 2022 is supply constrained and burdened by exceptionally high cost… Where possible, we continue to stock up on the inventory at higher-than-normal levels in anticipation of continuing supply chain challenges.”

The firm’s CFO Sanjay Kalra added that margins had been impacted and that it would look to offset this “by price increases which we are working with our customers, at the same time, with the economies of scale which we are seeing because of the growth.”

“There is evidence of component price increases which will either need to be absorbed by media tech suppliers or will feed through into increased end-product prices,” Peter White, IABM

Evertz, another public company, said in its Q2 2021 report on 31 October that the global supply chain disruption “has caused the company to experience unstable procurement capabilities leading to increased lead times and increased component costs”. To minimise the impact Evertz has increased its spend on raw materials since 30 April 2021 by $8.4 million. The pricing environment continues to also be very competitive, it added, “with substantial discounting by our competition.”

No safety in the cloud

Suppliers and developers of product tagged IP, cloud or software-defined are not immune either. All of these systems rely on hardware. Data centres comprise racks of servers. In fact, 96% of businesses rely on hardware, reports the IABM.

“Cloud is not a strategy that will help the industry out of this,” Zanni said. “Cloud service providers will be affected by this.” 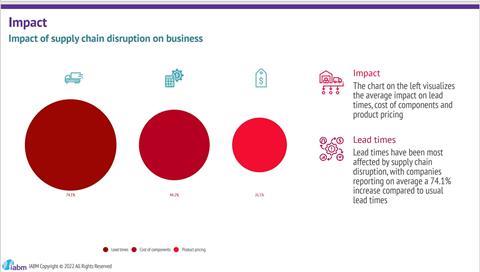 It is an understandably sensitive issue with very few companies prepared to talk about it openly, perhaps fearful of scaring customers and investors with price rises, delays or earnings warnings.

One vendor says: “From the middle of 2021 demand began to rise quite markedly, and global supply of some core components and raw materials became restricted. We have subsequently seen a prolonged rise in the costs and lead times to the point where our own delivery schedules to customers are at risk.”

The vendor adds: “We saw a problem in computer touchscreen displays too, which are used in huge quantities across numerous B2B and consumer industries. Basic raw materials such as metal alloys are also increasing greatly in price.”

The electronic components shortage is just one element of overall industrial inflation. Prices for all television equipment will likely go up, and delivery times will increase.

One tech company says it was forced to change the delivery period for its products from 45 days to 60 days or more and claims some manufacturers cannot guarantee a delivery date at all.

Companies can find components on the grey market of distributors and brokers, but they can expect prices to be high. An alternative is the BaM Stock Exchange launched last year to enable IABM member companies around the world to list their excess stock using internationally accepted parts codes and descriptions. IABM member companies who are experiencing shortages can search the BaM Stock Exchange listings to quickly discover if parts they require are available.

The initiative is designed by the industry to sustain itself by offering fair pricing and yet has had disappointing take up.

White says: “It is a value-added service designed to keep short supply components within the industry to the benefit of all. I have been surprised that not many companies have taken advantage of the BaM Stock Exchange so far; perhaps this is the moment for them to do so.”

The first signs of a global electronic components shortage emerged in autumn 2020. These were ad hoc situations when even popular components from major manufacturers, which were previously always available on the shelves, suddenly began to disappear. An example: Nvidia’s GeForce RTX 30 graphics cards “were announced, desired, but it was impossible to buy them,” according to one vendor. The situation became critical in the spring of 2021.

Now, the industry is in a transition period in which new prices must be formed to balance the profitability of the equipment manufacturer with market demand for the number of items produced. 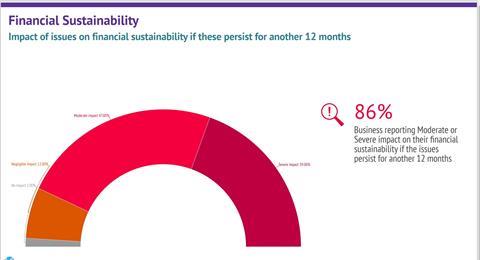 The supply chain shortage has dragged on for over a year

The car market is a good representative example. You can buy a car for a recommended price with a delivery period of 6 to 9 months. If you need the car urgently, you can pick it up in the near future with an overpayment of 20-50%.

One vendor prepared to go on the record is Slomo.tv, a leading manufacturer of slow-motion replay servers and video-refereeing solutions.

“It definitely did impact us and quite a lot,” says CTO Igor Vitiorets. “We try to adapt to the processes which are taking place. If possible, we increase the inventory of components, which in turn increases the production cost of the systems for us. We do our best and none of our customers has been left without an ordered system.”

He adds: “In our opinion, unfortunately, the crisis will last for a long time, until the new prices for all products in the entire chain are balanced and also until a new consumer behaviour in the television industry is formed.”

Vitiorets elaborates: “Instead of constantly buying new equipment, the reliability of the equipment and careful usage will come to the fore. Equipment should be maintained to ‘live’ long. New products should be released not because a new trade show comes up and it is urgent to release a novelty, but because it actually solves problems or includes new technologies.”