ISE 2022 review: Pro-AV is back in the sunlight

Having been postponed from February, ISE was a long-awaited opportunity for the professional AV industry to meet face-to-face at a new venue in the Catalonian sunshine. 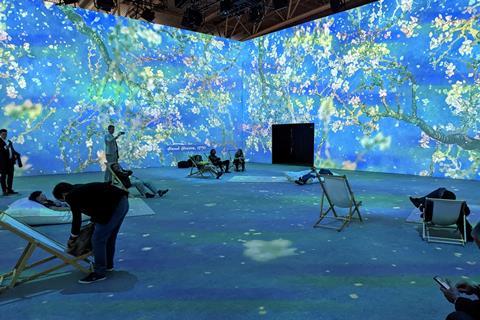 An immersive art exhibit at ISE 2022: 360-degree digital artwork is the future

“We’re missing about 300 Chinese customers and missing a few Americans due to [US AV trade show] InfoComm being so close to ISE this year,” said Mike Blackman, managing director, Integrated Systems Events. “So those are challenges, but I don’t regret moving [the show] to this date; it was the right decision. We see that in the commitment from the exhibitors.”

Blackman was keen to point out that ISE was all set to grow again had Covid not intervened.

That will be the aim when ISE returns to Barcelona at the end of January 2023.

A new generation of audio

No area of pro AV suffered more than live events during the pandemic. But remote mixing helped keep some shows on the road by enabling engineers to run shows from a distance. “It should be thought of as an extra tool rather than a simple substitution in the traditional front of house set-up,” said Stew Hume, chair of the Live Events Summit at the conference. 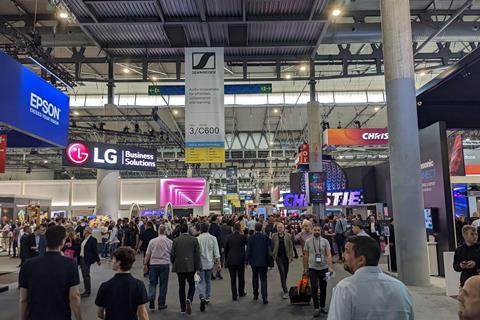 ISE’s first show after the pandemic

“On a massive stadium tour,” Hume says, “50-000 people are still going to want to go and see the artist. But with a sophisticated remote mixing option, a high-quality live stream could be created with top-notch audio mixed in a studio rather than a broadcast truck.”

Surround sound has long been used for live concerts, but the new generation of immersive audio systems could bring an end to the traditional stereo format.

“The term ‘immersive’ has become something of a misnomer as people have an idea that all it means is sound will appear behind you,” Hume said. “But it has the ability to give every member of the audience a better live experience.” Bjork and Bon Iver were among artists already doing this, he added. 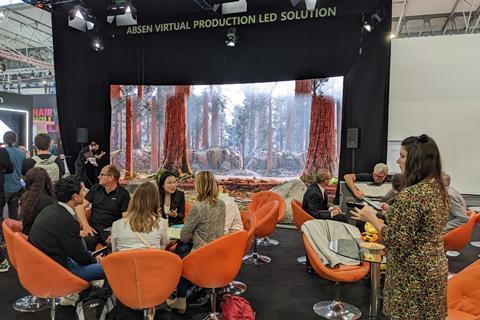 “We’ve seen continuous improvements in pro audio, but there’s been no real evolution since the invention of the line array,” said Jochen Sommer, Director of Operations EMEA, Adamson Systems Engineering. “Object-based spatial audio is on its way – and it’s a revolution.”

The Fletcher Machine is an object-based mixing solution that uses amplitude and time localisation for sound object rendering and placement. It uses a dedicated hardware audio processor and a remote control running on a separate computer to deliver a “spatial unmasking” of sound sources.

“We can create a wider spatially coherent listening zone for a more natural sound field,” Sommer explained. “You’re not creating the mix entirely in the console. Instead, you feed individual objects – a snare drum or violin – into the soundscape. The result is a more direct connection of the listener to the sound.”

“By the end of the decade, AI is going to overtake humans in how smart it is,” predicted Amelia Kallman, who describes herself as a futurist. “Think about that: in eight years we’re no longer going to be the smartest thing on the planet – which is really frightening.” 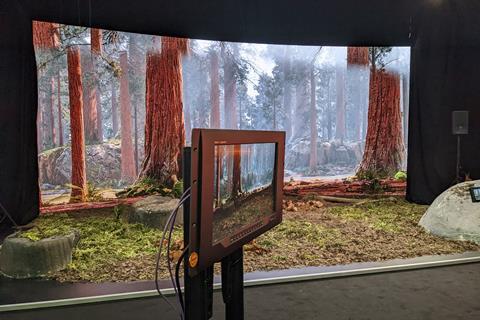 “As AI plays a bigger role in our workspaces, our creativity, our ideation, our design skills and most importantly our ability to collaborate and connect are going to be that much more valuable.”

With an impressive live demo of AI in the workplace, Cisco showed how simultaneous translation by AI could help break down the barriers for the smart workplace. Colleagues on a video call spoke various languages and were translated live. Its AI was able to reorganise the faces of participants around a table into individual picture frames to make it more inclusive for those joining remotely.

XR - treating reality as a ‘medium’

Virtual, augmented and extended reality are playing a fundamental role in shaping our future real-life realities. 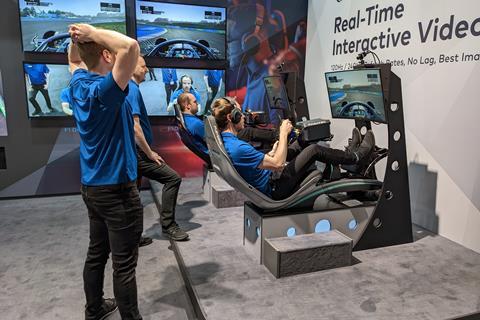 Professor Fridolin Wild of the Open University is leading a project using Augmented Reality to deliver digital learning. Demi-Sync AR, he explained, is something that feels live but is actually pre-recorded. “Reality is treated as a medium,” he said. “It’s the idea that captured experiences can be used in such a way to make them feel more live and delivered in real time.”

Wild showcased a live feed of an indoor space replicating the surface of Mars in which an AI avatar – pre-recorded, appearing as live – was introduced to educate the viewer about the planet.

Kallman believes that we’ll reach a tipping point for XR in the enterprise space around 2026, coinciding with Gen Z entering the workplace. “These guys are already in the metaverse,” she said. 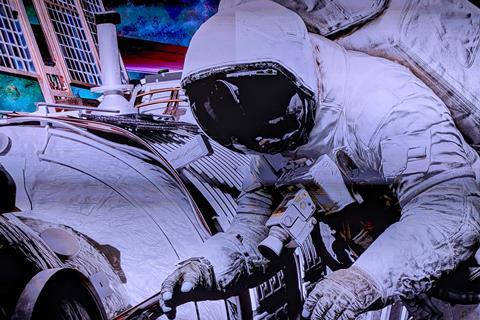 Illuminarium is a visitor attraction in Las Vegas and Atlanta and uses cinematic techniques, interactive content, and theatrical design to give visitors a sensory experience of environments like a safari or a space station. Its CEO and cofounder gave a keynote revealing that new venues are opening in Chicago and Miami, and that in five years it aims to have 25 worldwide.

The company is indeed making money from ticket sales and concessions and an immersive night time bar experience. “We hope to be welcoming 15 million visitors a year and to have a business that’s worth billions of dollars,” he said. 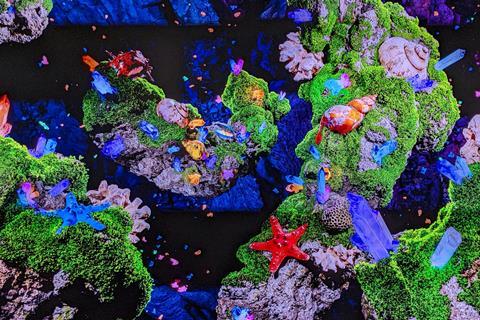 Sergei Sagas, chief innovation officer at Hyperreal showed how his company is exploring the idea that actors, singers and other ‘talent’ should have more control over digital versions of themselves – especially as the metaverse takes hold. “Let’s create a single universal avatar that would be owned by the person it represents,” he urged.

360-degree digital artwork is the future

Artist Refik Anadol coined the term digital painting in 2008 and is the creator of ‘In The Mind of Gaudi’ a digital artwork exhibited in the Gaudi Cube, the world’s first six-sided LED-walled room. “Data is my primary media,” he said in a keynote. “Visual experiences are not only for aesthetics but can be practical. This is the future of the medium.”

Anadol will show what he means next year when he opens Dataland in LA. This will be a collaboration with neuroscientists, architects, AI developers and biological scientists.

A special immersive art exhibit at ISE 2022 invited attendees to find a deckchair or a comfy cushion, and just chill as they were surrounded by the vivid paintings of Vincent van Gogh. Irises and Almond Blossom, oil paintings from 1889-1890, are among a dozen classics from the Dutch master gently animated, projection mapped, and set in a relaxing Japanese house with tatami floors and sliding doors.

The rise of immersive workspaces

Immersive workspaces are transforming office spaces worldwide and were a major trend at ISE2022. These are being designed as a way to connect staff in the building with colleagues working remotely. 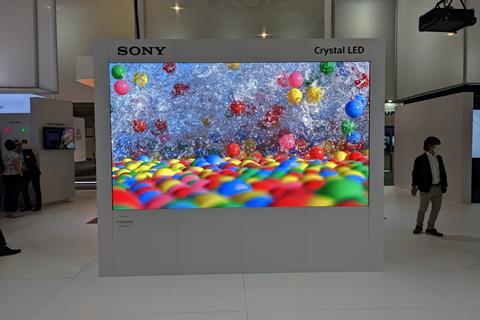 “There is an opportunity for people to not only view the information but to be inside of it - to be part of a different sensory and information experience,” said Massimo Pizzocri, VP, video projector sales and marketing at Epson.

Its solution pairs three projectors displaying images over three walls with which users can interact. It the type of technology that might traditionally be found in bespoke and highly expensive Computer Aided Virtual Environments. Epson and tech partner Igloo Vision aim to bring the concept within reach of the mass market.

“University departments, academies and colleges are a key market,” said Jake Rowland of Igloo Vision. “One in ten meeting rooms in a business could be a fully immersive collaborative space with surround projection and video conferencing. It could be an interactive space shared between different departments.”

The showstoppers at ISE tend to be projection mapped visuals and giant LED screens playing back kaleidoscopic images. But different multi-dimensional formats point to the future. 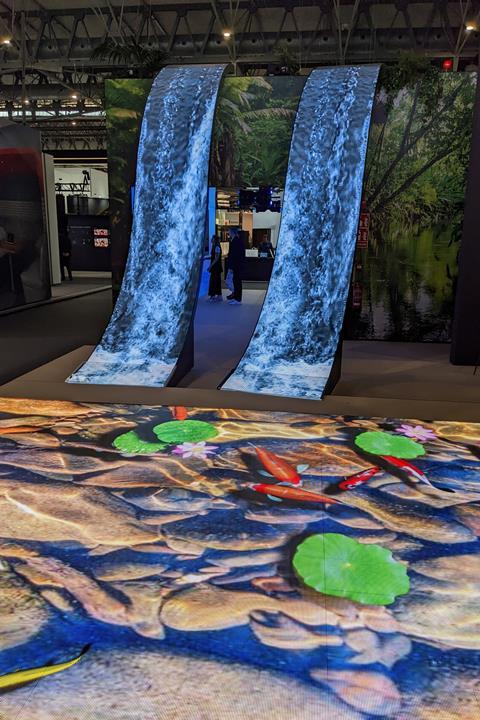 “We’re convinced 3D will be the future of digital content, especially digital signage,” said Kiryl Chykeyuk, CEO and founder of Hypervsn which has deployed more than 20,000 holographic displays worldwide. “We live in a 3D world and we need to see digital content in 3D.”

The digital signage industry faces a number of challenges ahead as it grapples with a range of factors affecting the supply chain, including ongoing lockdowns in China and price inflation.

In a keynote, Florian Rotberg from Germany’s invidis consulting said that, although the industry is growing again, with a 2.1% increase in units sold globally in 2021 to 6.9m, it’s less clear what lies ahead.

One of the most pressing topics, Rotberg said, is sustainability, with 80% of the carbon footprint generated by operational factors. The key is to focus on power consumption and recycling to improve the industry’s green credentials.