MovieLabs, the tech joint venture of major Hollywood motion picture studios, has announced its chosen case studies that it believes are advancing the industry and reinventing the media creation ecosystem.

The MovieLabs 2030 Showcase Program recognises organisations in the Media & Entertainment industry that are applying emerging cloud and production technologies to actual media workflows with enhanced efficiency and interoperability. The initial selected case studies are recognised as being aligned with the 2030 Vision Principles and will be highlighted at the IBC2022 Show this week.

Progress and momentum in content creation, distribution and workflows are all featured by the chosen MovieLabs case studies, which include entries from Amazon Web Services, Dreamworks Animation, and Disney Studios Content.

Richard Berger, CEO of MovieLabs, said: “We have had a tremendous response to the first phase of our 2030 Vision Showcase Program. It was great to see so many organisations submit case studies showing how they have been putting the principles of the 2030 Vision into practice across various parts of the media supply chain including: Movie and TV production, broadcast and streaming distribution, live news, live sports and even music events.” 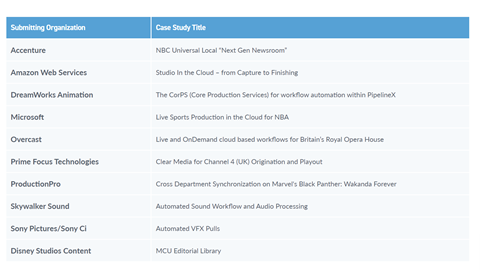 Collectively these case studies are a demonstration of the Vision concepts of cloud-based workflows, applications coming to the cloud storage, propagation of privileges publishing media through a workflow (instead of moving assets), archival media being used as an asset library for repurposing, a single identity system for all users in a workflow and complex media asset collections being linked through metadata.

Earlier this Summer organisations were invited to demonstrate how they are implementing aspects of the MovieLabs 2030 Vision and moving from “principles to practice” by submitting their case studies to the 2030 Showcase Program. Submitting organisations needed to illustrate how their examples aligned with one or more of the 10 principles of the MovieLabs 2030 Vision.

MovieLabs evaluated each entry, narrowing down the initial list in time to be highlighted at the IBC Show in Amsterdam. Later this year MovieLabs will publish the selected case studies on MovieLabs.com and they may be referenced by MovieLabs at industry events, conferences and online. Additionally, select 2030 Showcase participants will be invited to present their case study at a private event with production technology leaders from across the MovieLabs studio members – Paramount Pictures, Sony Pictures, Universal Pictures, Disney Studios Content, and Warner Bros.

More details on the Showcase participants case studies are all available on the MovieLabs website.