Many freelance stories come from environments and conditions that most broadcasters would consider it impossible to shoot in or under. But news-gathering freelance style cannot happen without an army – small or big – of local fixers and good safety training. 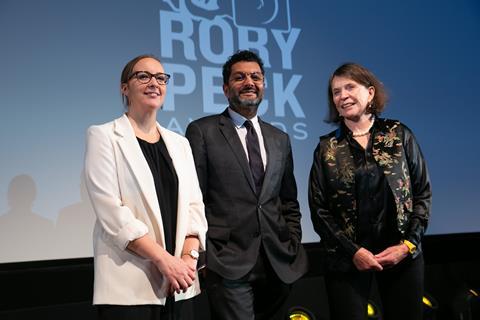 Speaking before the winners of four categories were announced, Clothilde Redfern, Director of the Rory Peck Trust, explained why the charity exists.

“News gathering is a huge complicated process. We are a safety net for when things go wrong, because increasingly they do. A survey by the NCTJ revealed that four in five of UK journalists are worried about their safety while doing jobs. If you are staff, you probably have the support of a dedicated risk team, but 90% of journalists want more guidance and support on safety issues,” she said.

“The risks are becoming more complex, but thanks to additional funding from the Google News Initiative we will soon be launching a risk and security help desk,” she added. “Our driving purpose is to protect the important pool of independent journalists who, in turn, protect our democratic values in a world of increasing authoritarianism.”

The News Award finalists were Alexander (Sasha) Ermochenko and Pavel Klimov for Ukraine (various), Raul Gallego Abellan for Edge of The Artic, and Bhat Burhan for How Remote Areas in India are Getting Vaccines. The commissioners were Reuters, Al Jazeera, and Insider respectively. 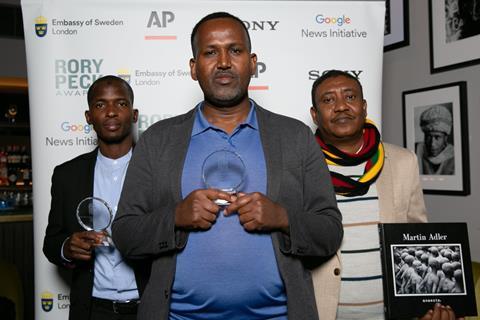 In accepting his win for his shoot in Kashmir Burhan said: “As journalists we are facing intimidation and censorship more than ever. Almost every media house has taken a back foot and has altered their editorial policies, so that during such a crisis a lot of stories disappear in front of our own eyes.”

The editors at Insider, though, have given him the support freelancers deserve. His film was shot in a day, and he admits that he was quite lucky to get snowfall.

“I had an all-white background so it was quite challenging because other colours can get dulled. You have to see which colour you can capture and add,” he said. “The snowfall helped show the hardships and challenges the health workers face.”

The News Features Award, all about in-depth looks at key stories, was won by Jamal Osman for his astonishing C4 News commission Inside Al-Shabaab. One of the judges observed: “What a master he is at what he does.” 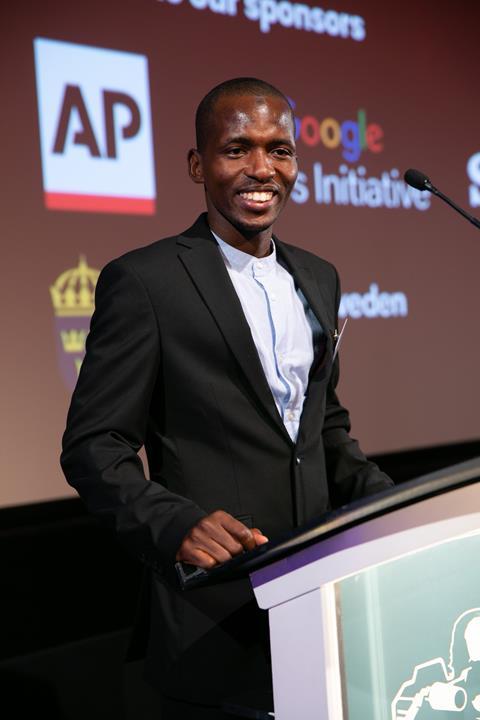 “In doing stories like Al-Shabaab you need editors that trust your judgement,” Osman said. “You don’t take filming equipment from London because they think the secret services have hidden some gadget so they can listen with or follow, so I hire from Somalia, specially somewhere close to Al-Shabaab territories.”

This is last minute, but Osman plans everything else beforehand in fine detail. He said: “I have good contacts and I am Somali, but they think I am being followed, and secret services can use me to get them. But they know I am very strict. I do my job.”

“Yes, they are seen as terrorists, and they kill people all of the time, but we already know that side of the story. I was interested in seeing what else, and getting deeper into the group to find the ambition of what they are trying to achieve,” he added. “These guys are a shadow government: they have taxing and educational systems, and strong military. And now they even have a suggestion box.”

Henton shot for two weeks with a Canon C70. He said: “There are stories everywhere in Lebanon, and it was a case of identifying what was the strongest and finding a unique way of telling it. I chose the world of a single hospital.

“The country has been quite sectarian, and the opposing groups and shifting alliances find it very hard to talk to each other at any productive level,” he added. “It was all about identifying the stories and identifying the characters as we went along.”

The Sony Impact Award, for long-form single subject stories, was as particularly strong in terms of the finalists of the first two categories. The winner was Yusuf Anka for The Bandit Warlords of Zamfara, which is a brilliant and incredibly brave look at a decade old crisis built on slaughter that BBC World Service commissioned.

“I first heard about these atrocities when I was a child in secondary school. Abductions and killings became the order of the day. Then in 2019 I met the BBC team, and we began scratching answers to Nigeria’s most pressing questions – who are these bandits, and what do they want?

“I was a law student, with no experience in journalism, but with the help of the BBC I got some basic training on shooting and recording voices. With the assistance of two fixers, I embarked on my journey through the districts and forests of Zamfara. We discovered a story of pain inflicted by climate change, corruption, poverty, and injustice.”

The other two finalists were Ramita Navai and Karim Shah for Afghanistan: No Country for Women, which was seen on ITV Exposure and PBS Frontline, and Kim Paul Nguyen and Chris Phillips for the Vice commissioned production Conversations with (Australian) Coal Miners about Climate Change. Both were five-star productions hitting big issues.

The Martin Adler Prize, given in tribute to the greatly respected Swedish news journalist who was killed in Mogadishu in 2006, saw journalistic nominations from The People’s Archive of Rural India, Middle East Eye, and Unbias the News. 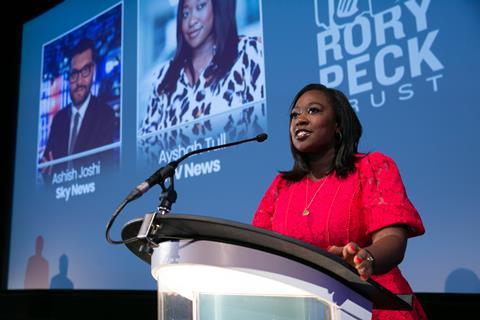 The winner was Mohammed Alamin who is based in Sudan. Parth Nikhil, based in Mumbai, and Alithea Stephanie Mounika, based in Bangalore were the other finalists.

Nikhil has specialised in reporting on the marginalised sections of society, and has written for the LA Times, Washington Post, Al Jazeera, and the People’s Archive of Rural India. He has received honours from the European Commission, and the Missouri School of Journalism.

He focussed on the big issue doing the rounds in conversation. He said: “Freelance journalists do not get the institutional backing that most journalists get, so that when you are working on a sensitive issue you are basically on your own.

“If you write a story that does not go down well with the authorities, somebody could slap you with a defamation case. I don’t know how many publications would then back you because you are not an employee,” he added. “You then have to hire lawyers, and the cases are filed in faraway courts!”

This has happened to a lot of independent Indian media outlets.

“They don’t have as many resources, so they are basically bleeding these media people out,” said Nikhil. “In India the way things work is if you are not in the good books of the government, you do not want to take any risks.”

Jamal Osman also agreed on the big issue. He said: “The biggest threat to freelancers is not having the support. The Rory Peck Trust shows that we have to appreciate freelance journalism. We take huge risks, and it is dangerous, but it you get the support you need you can deliver great material, and know that if something goes wrong there is a support mechanism.”

On the issue of keeping journalists safe, Redfern was quite confident. She said: “They know the safe routes and the local context they are operating in, and they can tell when things are going wrong, or when the risks are too high.”

Surabhi Tandon, in talking about her film Life at 50C, confessed: “As a journalist working in a developing country, I have to admit it has taken me a long time to arrive at a place where my voice can be front and centre.”