The Rory Peck Trust provides support to freelance newsgatherers around the world, and its annual awards, which took place earlier this year, help to showcase and celebrate the work of freelancers. 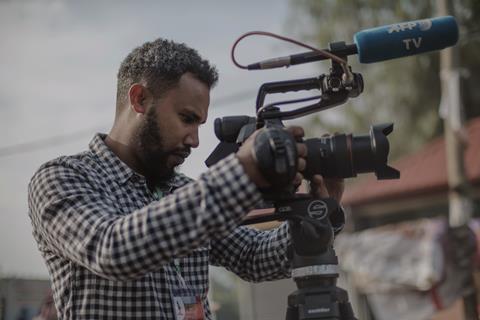 Solan Kolli won the News category with The Cost of War

The awards were fronted by Nawal Al-Maghafi, BBC special correspondent, and ITV News Europe editor James Mates, and it was Mates who gave the context.

“Most of us here work beside freelancers, and we know how much their work contributes to international news gathering. They cover the events that we cannot access, and uncover the stories that we cannot reach,” he said. “We honour those who despite increasing threats and dangers work tirelessly and bravely to bring us quality coverage of world events, and under reported stories.”

“[Being a freelancer is] hands down the most difficult, frustrating, back-breaking, bank account emptying job there is, but without a doubt it is the absolute best job in the world,” news finalist Katie G. Nelson

Al-Maghafi added: “The bravery of these journalists is bringing these stories to the world.”

The major issue in the air was mentioned by RPT director Clothilde Redfern, who said: “Freelancers work without the support that staff journalists receive. They don’t have access to the expert risk management, digital security advice, legal expertise, or psychological support. It is my hope that the Trust can fill this gap.”

The ‘under reported’ was the big theme of all nine story nominees across three categories. The only nation subjected to two brilliant exposures was Myanmar. There was one stand out different take on an over familiar American tale, and two winners that took four years to perfect.

The voice of war victims.

The news category was won by Solan Kolli with The Cost of War: Coverage of Ethiopia’s Tigray Conflict. This was initiated by head man Abiy Ahmed, who sent troops into Tigray to rout the ruling TPLF ruling party. 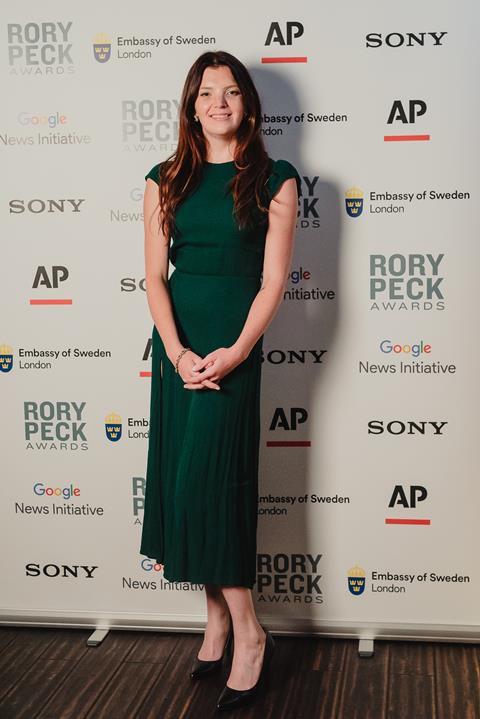 Kolli arrived after the military had attacked and faced a communications black out and other restrictions that complicated reporting over nine months. He quite brilliantly and bravely documented the aftermath with wonderful human insights.

Accepting his award online he said: “This is a testament that my photography succeeded in shining a light in the middle of an information black out, making the voice of war victims heard across borders.”

The other two finalists were an un-named journalist and filmmaker with Mayanmar’s Military Coup, and the New York Times duo Katie G. Nelson and Ed Ou with In the Middle of Chaos: Living with the Daunte Wright Protests at the Front Door.

Uncredited for security reasons coup impact is a brilliant documentary identifying precisely what happened at the start of the coup. The third film was brilliant for being a correct instinct.

“I was tired of being in the middle of protests filming the same thing, so I looked for a story that told something different, and happening to the surrounding community. There was a young woman (Ebonie McMillan) on her apartment balcony and I asked if we could come up and get a wider view,” said Nelson.

“She was very welcoming and just led us into her apartment, which was full of noise and chaos, and children trying to have a normal life. Ed and I looked at each other and said, this is the story,” she added. “We weren’t supposed to do a feature type of short film, we were just there to get a couple of snippets. Those children now know what it is like to have the sound of bombs outside their house.”

The story would get dramatically worse

The News Feature category was won by Brent E. Huffman, professor with North West University, with Uyghurs who Fled China Now Face Repression in Pakistan. This project has its small man hero in Mohammed Umer who operates an underground railroad to smuggle Uyghurs out of China, and runs classes in the mother tongue for children. China thinks he is a terrorist. 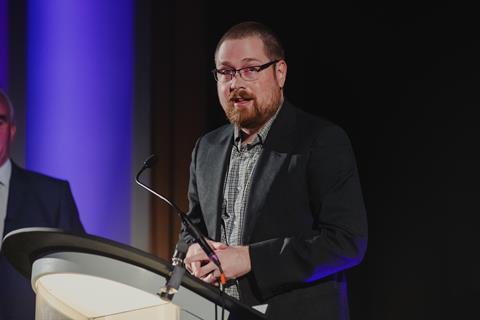 The threat is the China-Pakistan Economic Corridor (CPEC) and the high interest loans that Pakistan has to worry about. Huffman also gives us the actual terrorist damage being done to Chinese projects by the Baloch Liberation Army (BLA).

“I went between teaching courses over four years. The situation would change and the circumstances in this story would get dramatically worse every time I went. This film is part of a bigger story that’s looking at China’s push into other countries and the one built/one road project, which is like an $8 trillion re-imagining of the Old Silk Road,” said Huffman. “This looks at China in Pakistan and the groups that resist or fight back. I think the small characters like Mohammed are the most important, so the Uyghur activist is the one I would want to spend more time with. He has now fled to Turkey because the Pakistani authorities were hounding him. But he still wants to continue the underground.”

“I was tired of being in the middle of protests filming the same thing, so I looked for a story that told something different, and happening to the surrounding community,” Katie G. Nelson

The other two new feature finalists were The Widows of Everest by Rojita Adhikari and Sreya Banerjee, and the film Myanmar: An Uneasy Alliance by Tuja Kareng, Hkun Li and Edward Win.

The first looks at the number of Sherpa men who have died on Everest and the bravery of their widows, who want their own lives, and the chance to follow their men up the mountain. The second is about the rising opposition to the Myanmar army, in two states. Hundreds of young people are flooding to three-week military training courses.

Running around every accusation

The Sony Impact Award saw Joshua Baker score with Return from ISIS: A Family’s Story. The other, equally brilliant films were The Baby Stealers by Njeri Mwangi and Judith Kanaitha, and Undercover in Africa’s Secret State (Eritrea) credited to Evan Williams and Eritrean Undercover Team. 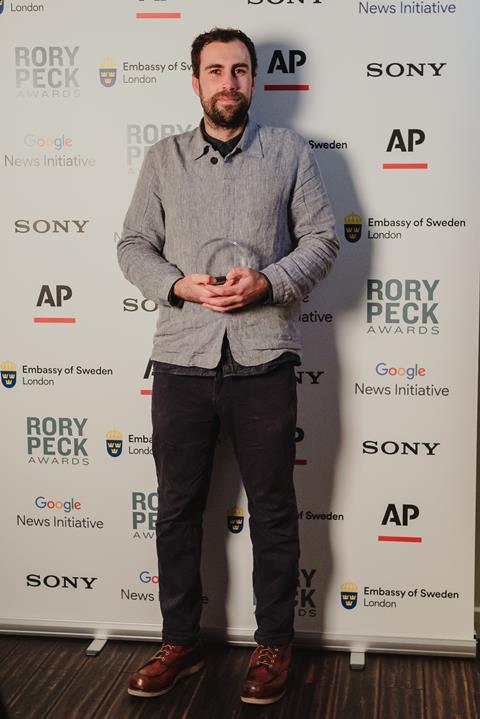 “The genesis of this film starts with me surviving a suicide bombing in Iraq. This was a massive story to take on and it took four years to get right because the person at the centre of the story (Sam Sally) was an unreliable narrator. It took those years running around every accusation she made, every sort of assertion, to find out what the truth was,” said Baker.

“She was certainly in an abusive relationship, but it turned out she had played far more of a role in the family ending up with ISIS. How did this young boy, her son, end up in the heart of the ISIS caliphate? He suffered greatly and was forced to do things by ISIS, but is now with his biological father,” said Baker.

“This has led to future stories and we are currently doing one about Shamima Begum. I have spent the last several weeks interviewing her, and that is going to be the next project for BBC2,” he added.

Africa’s North Korea is how people brand Eritrea. The essential question with this film was why do so many young Eritrean’s rush away to Europe. Evan Williams represents the undercover team. 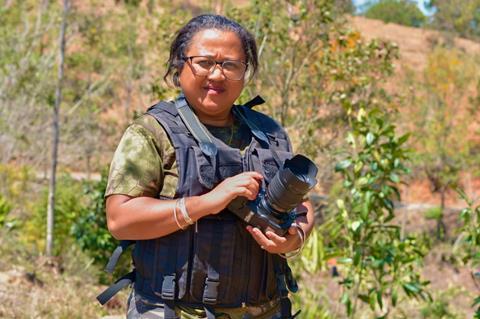 “Just being a finalist for the Eritrean team is such great recognition. They have operated in the shadows for so long under such repression and such fear, just to get this story out of their country. It has really empowered them,” he said.

One of the people in the Eritrean film said: “Everything is sadistic. It’s meant to push people down. It’s meant to hurt not just physically, but psychologically. The Eritrean people are the perpetrators and the victims themselves.”

The Baby Stealers required clever and complex undercover journalism, and focusses on the theft of babies from homeless mothers in Kenya. It is a wonderful BBC Africa Eye production, which resulted in the arrests of the exposed traffickers.

Laying bare the dark side

In her presentation speech for the journalistic wonders contesting the Martin Adler Prize, which honours freelancers or field producers, Mikaela Kumlin Granit, the Swedish ambassador to the Court of St James, said: “Press and media freedom is essential in democratic society, and something that must never be taken for granted.”

The winner was Riana Raymonde Randrianarisoa, an investigative journalist from Madagascar with 21 years of experience. One line of judging appreciation says: “She lays bare the dark side of the country at considerable risk to herself.”

The other two finalists were Parth Nikhil from India, and Speda Alnaqar from Iraq. The most apposite judging comment on the whole event was: “The quality was the highest I have ever seen, and the breadth of subject matter truly inspiring.”