Merging Hapi to get immersive at IBC

Merging will show several new introductions at IBC2021, including developments particularly relevant to broadcasters as IP infrastructures and remote production are ever more important.

Its Pyramix digital audio workstation is often used for immersive content, and the 25th Anniversary edition of Pyramix included many of the hooks needed to simplify the workflow when rendering the final master. However, some limitations remained, which have been overcome in the latest Pyramix 14, which also provides for the import and export of ADM files and remote control of the renderer. 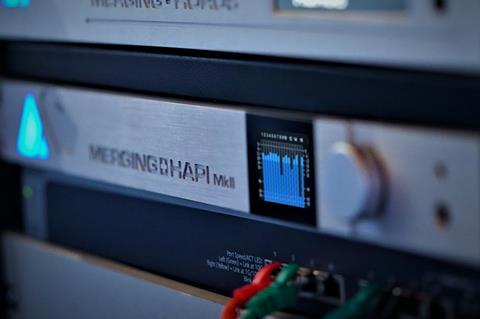 The latest Ovation 10 can also import ADM files. Most recently, Ovation has been deployed to drive the audio and cues for the current Expo 2020 in Dubai that continues through to the end of March 2022, where two independent fully redundant systems drive the L-ISA immersive sound system.

IBC2021 will also see the first public display of Merging+Hapi MKII, which has been selling strongly since its introduction earlier this year. Apart from a significant upgrade to use the Z-Man processor, the big advance for the broadcast market is the provision of the additional RJ-45 for full ST2022-7 redundancy. All Hapi option boards are fully compatible with the new unit, meaning that the audio performance retains the continuity demanded by Merging’s user base.

Merging+Anubis was shown at IBC2019, but since then another Mission has been added for recording music. With the option to switch from Monitor to Music Missions, the flexibility has been hugely expanded. Routing and network management have been simplified in the Music Mission to facilitate the setting up of an expanded network. Anubis SPS allows for ST2022-7 compliance as well as ST2110 and NMOS IS-04 and 05.

A recent partnership with Sonarworks to implement SoundID Reference in Anubis has proved popular. This is particularly relevant for remote production where acoustics in the audio area may be compromised. Anubis’ popularity with broadcast facility providers has prompted Merging to engage in discussions about more dedicated broadcast Missions soon.

The company is particularly pleased to return to meeting face to face at IBC. “There is no better way to demonstrate the products and engage in a meaningful discussion on the specific requirements of a customer,” said a statement.