Red Bee Media and FabriQ Media Group have delivered three livestreamed concerts with Dutch band The Streamers to a global audience of 5.6 million people across 88 countries. The third and final instalment of the concert series reached over 1.9 million viewers on 29 May.

All livestreams were delivered through Red Bee’s OTT platform, on behalf of Tribe Company in the Netherlands. The Streamers was created after the award-winning livestream of Vrienden van Amstel in January, which was delivered by Red Bee and FabriQ to an, at the time, record-breaking audience of 1.7 million people. 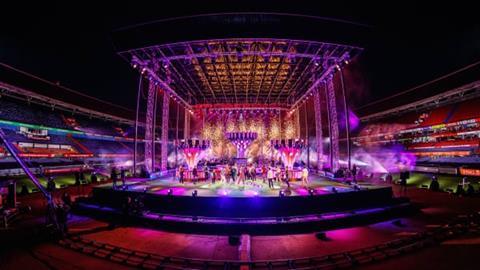 “FabriQ has collaborated with Red Bee on multiple livestreams in the past year, including the record-breaking Vrienden van Amstel, and we knew that our production philosophy, ways of working and team spirit would enable us to successfully deliver a live streaming event of this size,” said Tim Verhulsdonck, founder and managing partner, FabriQ Media Group. “The pandemic has forced us to think outside the box and help our customers to deliver live entertainment in new ways. As the world is opening up, we are looking forward to continue innovating and stream even more world-class entertainment together.”

The Streamers performed together three times between March and May in three different locations, the Royal Theatre Carré in Amsterdam, Noordeinde Palace in the Hague and in De Kuip Stadium in Rotterdam. All events were livestreamed globally for free through Red Bee’s OTT platform, in broadcast-grade quality. Throughout the streams, Red Bee offered instant 24/7 support and full analytics during and after the events.

“We are very pleased to have been given the opportunity to join forces with FabriQ and successfully deliver The Streamers to a worldwide audience together,” said Anders Wassén, head of OTT development, Red Bee Media. “Having scaled up our livestreaming offering as massively as we have in the past six months is a true testament to the quality of our OTT services and our dedicated staff. We can confidently say that we’re ready for even bigger challenges.”