“Midway through the pre-production process, we found out that the opera would be live at the Field Museum,” said Nikolas Wenzel of Valhalla Media. “This presented all sorts of logistical challenges for coverage. My first thought was that for reinforcement of the vocalists, we were going to need something stable, reliable and easy to use between different levels of the museum. One of the performance levels was on the floor of the great hall and another was tucked off up to the side.” 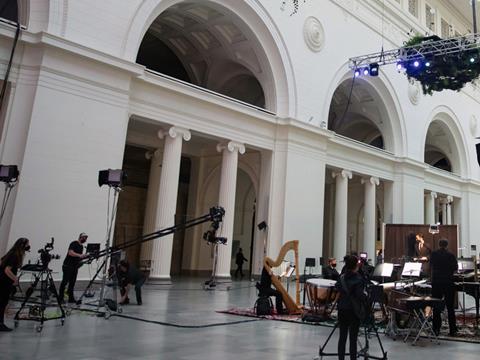 The opera was staged live at Chicago’s Field Museum

Lectrosonics DBSMD transmitter-recorders fitted to the cast members were picked up by a pair of DSQD four-channel receivers. DCHT portable digital stereo transmitters joined an M2T for monitoring by the conductor and mission-critical crew via M2R receivers.

“One thing viewers of the stream didn’t see was that the Field Museum was active and open to the public during the show run,” added Gerry Formicola of Second City Sound. “This meant that everything had to be set up each day, then struck and stored. The fact that the Lectro system was so quick and easy to get up and running made a huge difference here.”

The wideband range of the D Squared hardware was even more key to ensuring the cast’s singing was captured without a hitch. “Chicago may not be the worst place in the country in terms of RF density, but it’s certainly not the best,” explained audio director Brad Galvin. “So, the name of the game is bandwidth because you tend to spread channels all over the spectrum. With the DSQDs, DBSMDs and M2 Duet [monitor system] covering the whole range 470 to 608MHz, we could home in on clean frequencies without thinking about which gear is on block 19, which is on block 21, and so on.”

Wenzel recalled: “We were blown away by the results we achieved even at the first rehearsal. The clarity and warmth Lectrosonics is known for really came through, even with lots of variances in equipment placement.

“Knowing the reliability colleagues had experienced with their own rigs, Lectro was a no-brainer. “We’re now looking at upcoming projects in opera and musical theatre in Chicago, and for whatever comes next, our first order will be to set up our Lectrosonics rigs!”