With some major UHD and cloud-based product launches as well as some impressive IP deployments on show, the theme of this year’s IBC could be summarised as one of action as broadcasters embrace technology for the next phase of the industry’s development. 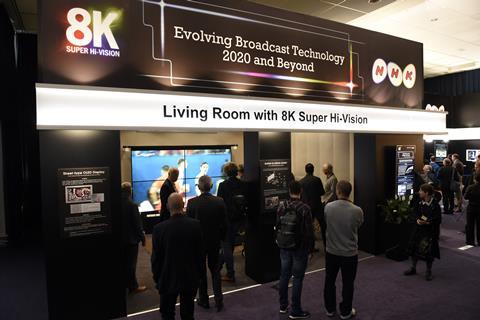 The IBC2017 Future Zone came into its own this year, dominated by a white half dome, which showed off what was billed as the world’s first 360-degree 8K monitor.

The structure was erected by UK company Igloo, which builds custom domes for 360 and immersive content. The Igloo dome is designed to allow content creators and developers to work on 360-degree content without having to wear VR headsets.

It also gives production teams the opportunity to work collaboratively on immersive content on a larger scale, just as a team would on any dubbing stage.

The appearance of the Igloo dome was just one of many indicators that VR was being taken seriously at IBC2017. While many are still not entirely sure what VR is for, there seemed to be a widespread faith that R&D into VR would eventually pay off.

Despite being burned by the 3D mania of several years ago, vendors seem confident that VR will become the next big thing. But what that “thing” is…well, that’s anyone’s guess.

Japanese public broadcaster NHK showed off its 8K solutions, of course. With the 2020 Tokyo winter Olympics on the way, NHK is polishing up its 8K technology for what will be one of the great broadcast tech experiments in recent Olympics memory.

NHK was showing off the new intoPIX compression codec which claims visually lossless compression in delivering 8K. The demo we saw was on a mid-size 4K monitor, so how much image degradation would be apparent on a large 8K display wasn’t clear. Still, it’s an impressive and necessary bit of compression tech which should steadily improve over time.

Despite a few big-screen presentations and impressive technical advances, the enthusiasm for an 8K future was muted. The buzz for VR, surprisingly, seemed much more robust. With broadcasters still only dipping their toes into the possibility of 4K, 8K is still a long way off. And many are unconvinced that 4K will bring much more than HD. In some quarters, HDR is looking like a better option for an upgraded image. But for 8K, most people are seeing it as, from first to last, an NHK project.

DoubleMe gave a real view into the future – or to a long time ago in a galaxy far, far away – with its HoloPortal mixed reality communications tool. The software allows realtime 3D recording of an object or individual which is transmitted live over IP can be viewed in 3D space via Microsoft HoloLens mixed reality glasses. Now anyone can send a distress call to Obi-Wan Kenobi – as long as the recipient has HoloLens.

Hall 9 was dominated by the Snell Advanced Media stand where the big attraction was Timeline TV’s new OB truck. The triple expanding vehicle, launched in the spring, is an all-IP 4K HDR truck and the first to fully incorporate the VSF TR-03 IP protocol.

SAM and Timeline collaborated closely to design a workflow based on the best existing IP and HDR technology.

The truck supports 32 Sony 4K cameras and there is space on board for twelve IP-enabled EVS 4K XT3 servers.

The Timeline truck is a testimony to the maturity of IP production technology. Last year IBC was talking about the future IP transition. This year the evidence is that we’re already well inside the new IP paradigm, and it’s up to broadcasters to decide when they want to join.

Hall 9 also included the IBC Launch Pad, which allowed smaller companies and start-ups the opportunity for their own meeting space at the show without having to put down big money for a stand.

As usual, Sony was the big presence in Hall 13 this year – but not the only one. This year Sony shared the hall with Chinese telecommunications tech company Huawei.

Sony always has a camera announcement or two at IBC and this year was no different – and was even quite special. In addition to showing off it’s new Venice cinema camera, announced just prior to the show, Sony debuted a new 8K broadcast camera – its first camera to contain three 8K sensors. 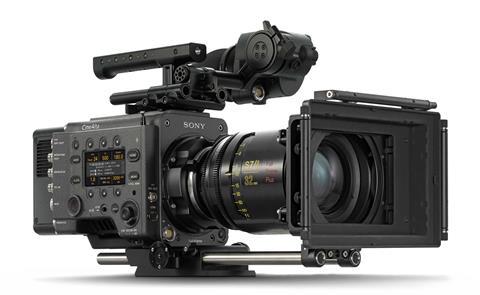 The new UHC-8300 was developed in partnership with NHK, another example of vendor preparation for Tokyo’s 8K Olympics.

The company also showed off three 4K camcorders, the XDCAM PXW-Z90, the NXCAM HXR-NX80 and the Handycam FDR-AX700.

Though ostensibly aimed at the prosumer/corporate market, the new 4K handicams have HDR capabilities and Sony’s Fast Hybrid autofocus system, and offer the kind of capabilities that a few years ago would have only appeared in a high range camera.

Sony’s biggest camera announcement however was for its smallest camera, a new action-cam, the DSC-RX0. The ultra-compact camera features a 1.0 type stacked 14.8MP Exmore RS CMOPS image sensor and is waterproof up to 10m, shockproof up to 2m and crushproof up to 200kgf. The RX0 has a maximum shutter speed of 1/32000 second and can shoot as low as 16fps or up to 960fps NTSC or 1000fps PAL.

It can be linked to other RX0’s in a variety of configurations, and using Sony’s wireless radio commander, up to 15 of the cameras can be triggered remotely - ideal for bullet time and time slice recording effects. The RX0 was presented alongside a number of new accessories for the camera, including a prototype cage for VR applications.

Huawei’s presence alongside the Sony stand, featuring events and press conferences throughout the show, seemed to indicate a drive toward taking a more central place at IBC. The company showed off a number of integrations with other broadcast providers, including the integration of Imagine Communications Versio playout software with Huawei’s data centre compute and networking equipment. Technology collaboration with Nevion on 3 Screen Solutions was also highlighted.

Huawei’s big announcement was the unveiling of its Envision video solution for MSO. The solution enhances hybrid video service capabilities with an all-IP transformation of video services. 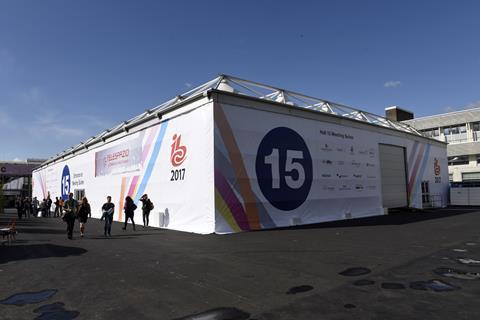 Hall 15 seemed hidden away from the main activity of the show. Tucked away between the Auditorium and the RAI’s main café, the Hall in fact featured some of the show’s most significant players and it was one of the halls that seemed to most clearly look into the future, with major global tech companies like IBM, Tata Communications, Microsoft, Nokia and Technicolor.

In addition to showing new capabilities of Microsoft’s Azure cloud platform, the Microsoft stand played host to a cluster of forward-looking tech providers, including cutting edge AI companies like Veritone, whose content recognition AI platform has been incorporated into Quantum’s aiWARE content aware storage solution, and x.news, the Austrian start-up whose research platform allows journalists and brands to monitor and collate huge amounts of data from multiple sources.

The hall was also a hub for meeting suites where companies were able to conduct serious business away from the crowded halls. And the central theme of IBC2017 seemed to be “it’s time to do business”. With IP and cloud technologies finally entering a mature phase, this seemed to be the year when the waiting was over and broadcasters started making the choices which will carry the industry into the next phase of its development.