Mo-Sys bMR (broadcast mixed reality), a new category of product that combines an LED content server with a MOS controlled on-air graphics system powered by Unreal Engine graphics, is being launched at IBC.

It’s aimed at sports, news, or current affairs broadcasters who want to deploy (or transition to) an LED virtual studio driven by a unified Unreal-based graphics solution with integrated 2D/3D on-air graphics under MOS/NRCS control. 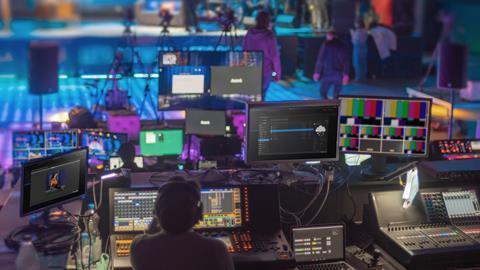 Mo-Sys has partnered with on-air graphics specialist Erizos Studios for the solution, which is intended to run on-premises and drive any size/shape/pixel pitch LED virtual studio (equipped with sufficient render nodes) up to 8m pixels.

It offers multi-camera switching capability up to UHD 4K resolution, enabling multiple cameras to be used with an LED volume, where switching between cameras is orchestrated with the LED wall updating correctly. Set extensions with simultaneous AR are also possible, with the delay between the Unreal graphics perspective displayed on the LED wall, and the camera’s actual position, claimed to be the lowest on the market today.

It contains two Mo-Sys VP VFX virtual studio compositing licences (more can be added), for an upgrade transition scenario where a broadcaster needs to deploy bMR initially as an on-air graphics replacement to work with an existing green screen virtual studio, before upgrading this to an LED virtual studio.