In case you missed it…the journey to the cloud

Broadcasters were encouraged to embrace cloud-based technology at IBC, where the subject was one of the main talking points of this year’s show. 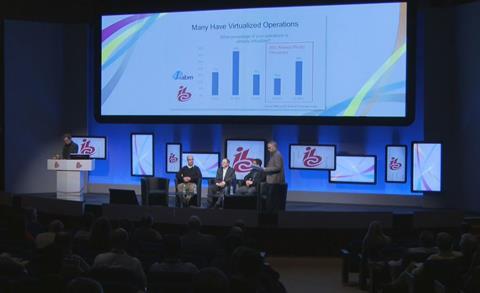 Jeff Kember presenting in the session Cloud: How far can it go?

Google Cloud’s Chief Technology Officer Jeff Kember told delegates during the session Cloud: How far can it go? that the $30bn investment Google has committed to the infrastructure, hardware and software stack to make heavy duty tasks such as rendering, simulation and compositing possible, is a move in the right direction.

Kember explained 80% of Disney’s The Jungle Book was rendered in Google’s Cloud enabling VFX house MPC and teams to carry out quick renders.

“Our goal is not to replace the editor but to make the process more efficient,” Kember said.

Google unveiled new machine learning features such as metadata tagging, facial recognition, intelligent clipping and logo identification as well as capturing content which can be directly uploaded into the cloud, streamlining efficiencies for clients.

”It’s been quite a pivotal year” - John Ive

The IABM End-User survey revealed that around one quarter of broadcast companies have virtualised their businesses.

Panelist Tom Griffiths, Director of Broadcast and Distribution Technology at ITV, said that the UK broadcaster would not be doing a whole scale uplift into the cloud.

During the annual IBC wrap-up session, IABM Director Strategic Insight John Ive said: ”It’s been quite a pivotal year,” with the exhibition showcasing new technology at the core to changes across the industry.

Ive predicted rapid change would occur over the next five to 10 years affecting every facet of content creation through the supply chain to delivery. One of the busiest areas of the show was the IP Showcase – underlining the significance of IP-based production.

Broadcasters were warned by experts to embrace technology or risk “signing their own death warrant”. The days of the costly production crew are numbered explained RTE Head of Innovation Glen Mulcahy, who said: ”It is the story that is everything,” and the same content can be captured on a smartphone, the technology is only getting better.

“We have made great progress in leveraging the power of cloud technology with our one of a kind software solution,” said Prime Focus Technologies Global Chief Executive Ramki Sankaranarayanan. Utilising the right technology was essential to meet the consumer’s demand for more content Sankaranarayanan told IBC365.

Cloud-based TV service YouView Chief Architect Jeff Hunter said: “The key is to understand the user and personalise their experience. You also need to get smarter – driving insights from the data you collect.

“For Pay TV operators the battle is on to develop deeper insights into the interests of customers – giving touch points for the provision of a much wider range of services.”