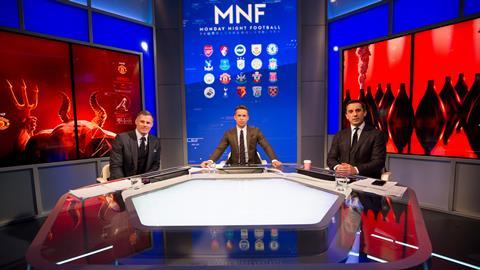 For almost 20 years Sky Sports Innovation Manager Mike Ruddell has been at the cutting edge of sports and broadcast technology, but this team player has always had one goal in mind - to give the viewers the best possible experience.

The fiercely competitive nature of most sports on TV is almost matched by the rivalry between the main sports broadcasters, especially in the UK, as they jockey for position in the ratings and for the eyeballs of fans. 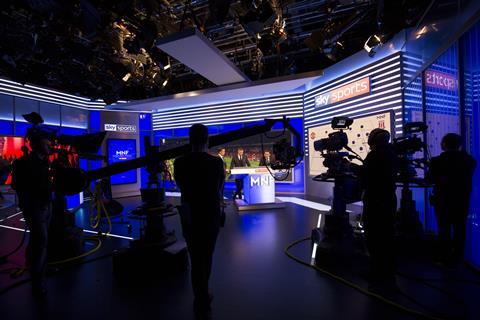 Constant improvement in content production and presentation is one of keeping the audience enthralled and Sky Sports continues to be one of the leaders in the race to innovate.

The man who owns the roadmap for advanced TV production process and technology in Sky Sports UK is Mike Ruddell, who has been with Sky since 2000. Holding degrees in Electrical and Electronics Engineering and Broadcast Engineering, Ruddell started out as Technical Director on a range of Sky’s news, sport, factual and entertainment studio programming; he later specialised in developing production techniques and technologies for interactive ‘Red Button’ sporting events.

Ruddell moved to work solely on Sky Sports in 2007, focusing on a broad range of technology applications from behind the scenes infrastructure through workflow advancements to onscreen advancements. Now focussed on his role as Innovation Manager, he is proud of the part he has played in many of the key advances by Sky Sports over the last ten years.

“The standout moments for me are always the ones where Sky teams and our technology partners pull together and overcome seemingly insurmountable hurdles to achieve a result which really wows the viewers,” Ruddell said. “Our Monday Night Football virtual set from 2013 would be a good example of that.” 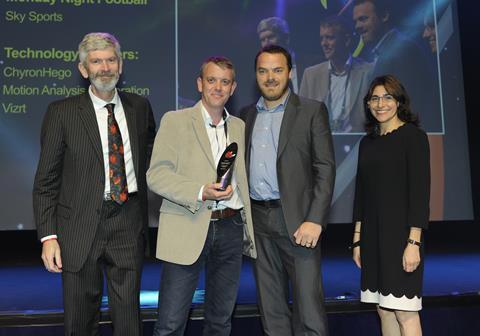 Together with partners Motion Analysis, ChyronHego and Vizrt, Sky Sports was awarded the IBC Innovation Award for Content Creation for the work on this flagship football show at IBC2014. Mike Ruddell accepted the award, which recognised a key innovation in the creation of a virtual set that gave the illusion of having a much larger physical set in the Monday Night Football studio.

The virtual set was able to be tracked with extreme precision, allowing the physical and virtual set to appear seamless as the camera pans from one part of the set to another. With several set locations in the vastly enlarged virtual space, presenters could also access and use data driven-graphics displayed in monitors or immersed into the studio as part of the virtual set.

More recently Ruddell highlighted the level of analysis Sky Sports has been able to introduce to its Golf coverage – this includes the Sky Cart with its daylight touchscreen, that puts an immediate way to evaluate a round at the presenter and golfers’ fingertips.

“Of course, many great team achievements are never seen by viewers, but an equal amount of effort goes into these and I’m equally as proud to be involved,” Ruddell said. “For example, over the past few years we’ve revolutionised our connectivity platforms to allow flexible, reliable and efficient ways to deliver more of the content people love.”

Olympian challenge
Connectivity of course is everything when you’re working in live sports broadcasting, with remote production being hyped as the latest technology panacea for delivering a wider range of content.

It’s not that new to Ruddell though: “Our first remote production was for Sky Sports News coverage from their Studio set up at the 2012 Olympics,” he said. “I don’t think the phrase ‘remote production’ had even been coined back then; we were just trying to find a way of running an efficient operation, without having to continually negotiate London traffic, or transport large amounts of kit.”

Since then things have moved on a long way, but for Ruddell that 2012 paradigm remains: “Do it for a reason, to solve a problem; don’t just do it because it sounds cool and everyone is talking about it.

“It’s important when considering remote to break down elements of the production and consider individually whether each could be more efficient or effective located at base or at the venue,” he continues. “Our remote events often end up more of a hybrid model. We found the tipping point is driven by a combination of distance from base, volume of events and the event duration and of course what improvements we can offer the production teams.

”Do it for a reason, to solve a problem; don’t just do it because it sounds cool and everyone is talking about it”

“The biggest challenge of remote will always be connectivity, particularly in far-flung corners of the world. In the UK we’re in a much better position than we were a couple of years back and most sports venues are pretty well connected; the problems come in venues we rarely visit which may not have fibre connections,” he adds. “That said, I think there is a big opportunity for broadcasters, and we look forward to addressing the challenges.”

Full year of sport
Getting ready for an event-packed 2018 has had already had chequebooks out all over the sports broadcasting sector, and Sky Sports hasn’t bucked the trend. 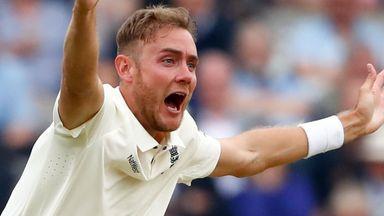 “We’ve invested heavily in developing our UHD capabilities on Premier League Football over the last couple of years and this summer we’re going to see the benefits of that realised on screen for Cricket. England’s Test series against Pakistan and India will be broadcast in UHD, as well as selected ODI and T20 matches for our Sky Q customers as well as the continuing Formula 1 season,” Ruddell said.

“With Premier League, F1, Cricket and Boxing, we’ve now broadcast more than 300 live UHD events in under two years, which is something of an achievement for the teams involved across Sky, and our technology and Outside Broadcast partners.

“We’ve learned a huge amount over that time from our first tentative steps into UHD production to it becoming a standard operational practice that we can reproduce reliably day-in, day-out,” he continues. “With UHD adoption in the home ramping up consumer demand for more native UHD content, we are looking at whether we can broaden this out to more sports.”

“The Open Golf and Ryder Cup, although not UHD, will bring us another opportunity to showcase our ever-evolving catalogue of tools which allow presenters to bring viewers closer to the action,” he explained.

This however is unlikely to include HDR broadcasts, at least for now.

He said: “From a content creation point of view HDR provides a similar set of challenges to UHD, and some new ones too.

“But we’re really still in the test phase, and it will largely depend on industry adoption and consumer demand as to how quickly this will progress.

“Ultimately, we want to give customers the best possible experience, so we’re always evaluating new technologies.”

On track
Ruddell explained specialist cameras is an area in which Sky Sports has always been on the cutting-edge:

“Whether it’s ref cam on cricket or rugby, wire mounted aerial cameras, ‘hole-cam’ on golf or high-speed cameras just about everywhere, we’re proud to be pushing the boundaries,” he explained.

“As cameras increase in quality and shrink in size there’s very few places we couldn’t get a shot from these days. Challenges remain around permissions of course as sports bodies and competitors can be wary of us getting too close to the action!

“Of course, when we do this it always needs to add editorial value and give viewers a unique point of view,” he adds.

He’s of a similar view when it comes to presentation aids, tracking technology is just one such innovation that Sky Sports makes use of. “Player tracking on Football is the most obvious example.”, Ruddell said.

“Initially used for simply tagging a player with a graphic, we can now see the potential of applying AI techniques to the tracking data whether it’s to automate some parts of the workflow or draw out some of the finer points of analysing the action.”

Another advance is in immersive production tools, such as VR, AR, and MR.

He said: “We’ve already done a huge amount of work in this space.

“Having set up a dedicated in-house facility, Sky VR Studios, we’ve created a number of really ground-breaking experiences across entertainment and sport.

“In sport, we’ve tried to take viewers behind the scenes, offering a unique perspective on some big events like Anthony Joshua’s dressing room, or in front of the Premier League trophy lift. They have mostly been short documentary style pieces, but we are exploring how best to do longer form content.

“A logical next step would be live immersive sport experiences, but the quality of both the pictures and the user experience have further to evolve in order to be genuinely compelling,” he adds.

Ruddell also sees the possibilities for AR as “really interesting”:

“We’ve seen some pretty cool applications of phone-based AR to drive in stadium fan engagement. The challenge now is how similar techniques could be applied by Sky as a content producer, rights holder and broadcaster,” he said. “Some of the best examples are from the US and rely purely on advertising and sponsorship, something that’s more of a challenge in our market.”

And which forthcoming innovations is the Innovation Manager personally most excited about?

He said: “I’m not going to give too much away here but we do have a few exciting developments on the go and continue to investigate the possibilities of emerging tech.

“I think like many others in the industry I’m keen to see how computer vision / AI techniques can be applied to live sport production. I’m also keeping a close eye on how gaming engines are changing people’s approach to graphics, particularly in the AR space; there are great opportunities there.”