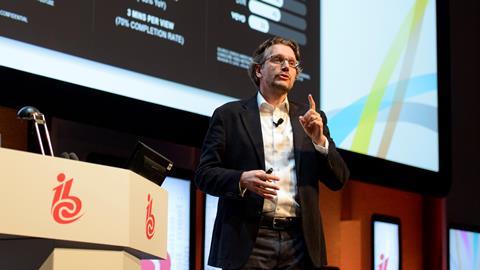 Ahead of the IBC Leader’s Forum, Erik Huggers is ringing the alarm bell over the need for European broadcasters to rapidly build aggregated online offerings. Crucially, the first steps have already been taken.

Erik Huggers doesn’t mince his words. As an experienced industry figure in digital media, he is focussed on the state of play amongst European TV broadcasters.

Despite his two years spent at the helm of US music video streaming giant Vevo, a role he departed in April, Huggers has been careful to retain strong ties to Europe. With major roles at Intel, Verizon and the BBC under his belt, the Dutchman has been attending IBC since 1994.

This year, he feels, will be strikingly different.

“Right now, if you look at IBC2018, I think it will be the first time, for real, that the impact of the internet on this industry will be front and centre – finally. There’s an existential threat, not on the horizon, but right around the corner.”

In his advisory board role with German media company ProSiebenSat.1, Huggers has been observing many European broadcasters grapple with the high-quality content and ease-of-access offered by the American tech giants like Netflix and Amazon.

“This is going be a crucial debate amongst the European leaders I think, in order to find out what to do in order to, quite frankly, survive. “

David vs Goliath
Huggers is blunt in his assessment of the problems facing the traditional broadcasters in European markets from on-demand US giants. However, he sees a recognition amongst management of the challenges ahead.

“For the first time since I entered the industry, there’s been a moment of awakening. In each European market, the big broadcasters have had their ‘a-ha’ moments, realising they’re in the crosshairs of some of the largest, best-funded, most highly valued companies on the planet. Unless they change their ways - they’re screwed.”

To quantify that point, Huggers indicates the considerable disparity between streaming companies and European broadcasters in staffing and development. It makes for stark figures.

“European broadcasters may look like giants now, but in a few years, will look like little mice in a massive play of consolidation. Netflix has 3,500 to 4,000 engineers working on a single product. Google has even more working solely on YouTube.

“By comparison, the biggest broadcaster in Europe, the BBC, has about 400 engineers working on the iPlayer, which I launched 10 years ago,” he observes.

“The question is, how are these broadcasters getting ready for a future where young audiences have already chosen not to use their [existing] service?”

Across European markets, decades-long rivalries between broadcasters have long been the norm. With language-defined markets in place, collaboration between broadcasters was discouraged on both a management and regulatory level, with competition concerns often being raised.

“We have regulators stating that that unless [broadcasters] start working together, there will be no industry”

Huggers sees that as having shifted in recent years, as regulators recognise the resources that multinational tech giants can throw at any European market.

“10 years ago, collaboration amongst local industry giants wasn’t possible. The competition or regulatory bodies would just say no.

“Now, we have regulators stating that that unless [broadcasters] start working together, there will be no industry. We’re seeing a total change of attitude, and that needs to be taken seriously because we don’t have much time. In 3-5 years, the world will look very different.”

Recent movements on the continent would appear to back up this assessment. One of the clearest signs of new collaboration between terrestrial broadcasters has come in France, with the announcement last month of Salto, an on-demand platform run between national broadcaster France Televisions and commercial entities including TF1 and M6 Group.

That service will offer a one-stop OTT service, providing sports coverage, movies and news, plus homegrown French drama and entertainment. A similar offering has materialised in Germany, with ProSieben having recently partnered with Discovery to deliver a new service.

For Huggers, these are the first signs of giving terrestrial platforms a real chance, through funnelling resources and expertise.

Successfully creating such a platform could mean broadcasters could avoid one of two fates: entering a death spiral by becoming dependent on an ever-ageing audience who never made the jump to digital streaming, or simply becoming a content contributor to the larger American tech firms and losing the ‘direct line’ to consumers.

“It would be such a sad outcome for an industry that has traditionally been so strong and valuable to European audiences, and frankly, investors,” points out Huggers.

Terrestrial producers may have an ace up their sleeve though. With massive name recognition in their home markets that’s been built up over decades, and with years of expertise and intimate market knowledge, they can continue to produce local content that truly resonates.

“It is important that these organisations focus their energy on creating local content,” he says. “That means local comedy, local drama, local entertainment – whatever. At the end of the day, I think that a lot of British audiences love British storytelling from their own soil.”

Testing the waters
Looking forward to the exchanges at the IBC Leader’s Forum, Huggers is particularly interested in sounding out the current atmosphere amongst European executives and decision-makers.

“I think it’s time for European broadcasters to get their thinking straight and put their past rivalries aside.”

“It’s time to start to cooperate in terms of content, brands and technology. They should be thinking about a single destination, on a market by market basis, so that it has a chance to get to scale and get a chance to compete.”

The delivery of such a one-stop service in the UK, for example, would simplify the process of tracking down missed episodes, and ensure that a far more rounded resource can be provided. Consumers will take notice and could intuitively recognise the models at play.

“In the UK for example, you have such a range of internet-to-TV delivery platforms. In that space you have BBC iPlayer, you’ve got iTV Hub, Channel 4’s player, and so on. There are five to eight different direct-to-consumer offerings out there, offered by the various broadcasters.”

“The way this [successful aggregator] could manifest itself is similar to Spotify. The free tier is the way that Spotify got to an enormous size.”

Wrestling eyeballs
Huggers knows from professional experience that younger eyeballs are migrating in huge numbers to streaming platforms like YouTube. The figures from his Vevo days are testament to that, and he can see this in effect even amongst his own children.

“In a world where Disney has gone after Fox and Sky, all the content that they produce is going to be held back for their own direct-to-consumer play”

“When I left Vevo [in April 2018], I think we were doing about 25 billion views a month on the YouTube platform. It’s pretty insane when you think about it.

“When the average length of video consumption was 2 minutes and 52 seconds, if you do the maths, it ended up being 135,000 years of music video content consumption per month. And that continues to grow at 35% per year. So, it’s the gift that keeps giving.”

While European broadcasters may produce a very different type of content, the need to wrestle back young viewers in the years ahead is clear.

Huggers also sees an ancillary threat further down the line in how US content could be partially choked off. The ‘walled garden’ effect of the major tech firms will be in full swing, he predicts.

“Increasingly, I think that the supply of stories out the US is going to be more difficult [to access]. In a world where Disney has gone after Fox and Sky, all the content that they produce is going to be held back for their own direct-to-consumer play.”

“There’ll be scarcity of original content (for sale). The $13 billion annual spend that Netflix is currently playing, that’s for content that’s only going to be available through Netflix.”

Differentiated, quality programming amongst European broadcasters seems to be the key to fighting back. Coming together to produce a shared content aggregator may also open the door to a friendlier future, where other types of collaboration between broadcasters become increasingly fluid.

Overall, Huggers still believes that there is still plenty for European broadcasters to be optimistic about in 2018. However, the big challenge should be met head-on.

“[European broadcasters] have everything to play for, but time is of the essence. No more ‘let’s optimise and squeeze a few more dollars out of this and that’. Let’s really sit up, pay attention, make the investments, and really future-proof ourselves.”

IBC2018 Erik Huggers will be speaking in the session Thought Leaders: Change to survive - What’s next for the broadcast ecosystem? as part of the Leaders’ Forum on Thursday 13 September.