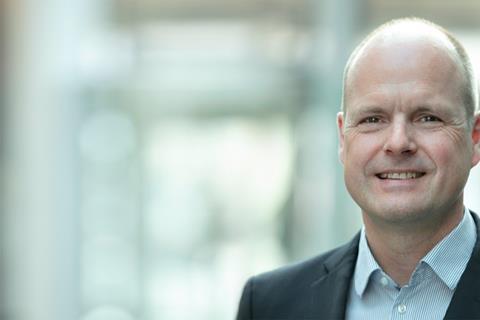 When it comes to knowing a company inside and out, no one could dispute the credentials of Rohde & Schwarz’s Cornelius Heinemann. Now executive vice-president, Heinemann has been employed by the German electronics stalwart for his entire career, beginning his near-30-year stint as a developmental engineer in 1991.

Since then he has worked on many major broadcast-related projects – including the introduction of products to support the DVB-T/T2 digital transmission standards – and played a pivotal role in the expansion of the company’s footprint in Broadcast & Media.

“We have focused great effort into evolving a full portfolio of solutions for Broadcast & Media [B&M],” says Heinemann.

“Clearly there have been many strong technology drivers in these markets, such as the rise of IP, but our [overarching objective] has been to cover the full range of studio production, post-production, delivery and distribution that our customers face.”

The mission to fulfil this extensive brief took a decisive step forward in 2018 when Rohde & Schwarz acquired Pixel Power, whose product line includes broadcast graphics, master control and integrated playout systems for use by linear TV broadcasters and playout facilities as well delivering mobile, online and video-on-demand content. Heinemann confirms that the acquisition has strengthened Rohde & Schwarz’s ability to cater to the rise in demand for software-defined IP-based solutions that can virtualise core broadcast functions.

In terms of post-production, Heinemann says there has been “continued strong interest in the capabilities of Clipster”, a hardware-based IMF and DCP mastering solution that supports 4K uncompressed playback up to 120 fps and also benefits from an HDR colour processing pipeline. Much of the current “drive in broadcast video quality is coming from the post industry, and 4K/HDR is something that we have been actively working on for a while – for example, with our delivery of media servers with HDR to Japan some years ago,” he adds.

Rohde & Schwarz is a leader in terrestrial TV and radio transmission with many decades experience in this international market. Alongside this, it has developed core experience in solid state RF amplifiers and has recently introduced the PKU100 family of solid-state satellite uplink amplifiers for the Ku-band with a peak power of 400W and 750W. Described as “using the advantages of solid-state over tube based amplifiers the series features optional adaptive linearization designed to substantially improve the RF parameters. “We launched the PKU range last year to a great response, and now we have some additional models just launched,” confirms Heinemann.

Redefining hardware’s future
With Rohde & Schwarz also introducing new communication testers for 5G mobile devices, the company’s status as a business with a formidable track-record of hardware development is in no doubt. In which context, it makes sense to enquire how Heinemann views the general industry shift towards more software-oriented workflows.

“Our aim is to cover the full range of media, post-production and delivery requirements”

“It is true that Rohde & Schwarz is known as a hardware company as we are really proud of our heritage there, both in the form of our products and our manufacturing facilities, such as our transmitter factory in the Bavarian forest,” he says. “But it should be noted that even in the kind of hardware products for which [we are most well-known], the software portion has become bigger and bigger due to the flexibility that this affords.”

This trend is likely to continue, as is the broader support for customers wishing to operate in a more virtualised environment. But it won’t be at the expense of security or reliability, indicates Heinemann: “This is important infrastructure so it has to be absolutely secure. We will cater to more software-defined environments, but this is a technology trend – it’s not a goal in its own right. Above all we will be informed by determining where we can see advantages for our customers.”

Nonetheless, he confirms that “major broadcasters” are now investing in software-driven systems such as Pixel Power’s virtualised playout solutions, which include products in the Gallium and StreamMaster ranges. The ability to control most of the company’s more traditional hardware solutions remotely via software has also proven to be especially advantageous during the pandemic, with Heinemann recently noting on the company’s website that it has been “straightforward for our support teams to remotely access, analyse and diagnose any issues that our customers might encounter, and enable safe operation.”

Talking of Covid-19, Heinemann praises the company’s rapid transfer to working from home. “We were able to move about 5000 people to home working in a matter of weeks,” he says. “If you asked whether that would have been possible ten years ago I would honestly have to say ‘probably not’. But the level of standardisation we now have in our operations, for instance across our IT devices, meant that we were able to adapt to home working with only minor issues.”

Whilst he feels that current events – and, in particular, “the impact on sports broadcasting” – are likely to mean that broadcasters’ implementation of new technologies may slow down for a while, Heinemann is philosophical about the present situation. “There is the fact that broadcasters have had more time to think about what technologies they are likely to require in the future,” he remarks. In particular, he expects this to result in a more concerted “push towards remote working, and solutions to enable that. [More generally] whilst cash-flow will obviously be an issue, and it will take companies a while to deal with the impact, I am sure that many will find a way to move on with their businesses once the worst of the crisis is over.”