Markus Förderer ASC, BVK, had just finished shooting Apple’s sci-fi thriller Constellation when he talked to George Jarrett about his career influences, his working practices, and what developments could boost his toolbox.

His origins in the film business started in the ARRI Munich camera rentals department before moving onto film school. He saw the evolution of digital filming, and customer lens and lighting selections. 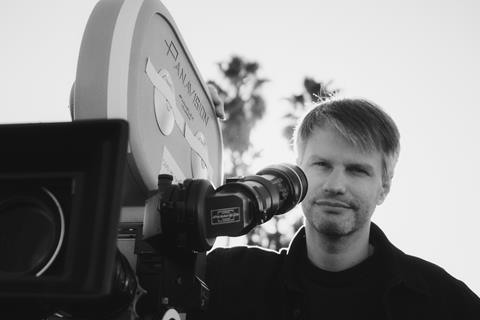 “My experience at ARRI involved meeting many experienced directors of photography, and seeing them test new lenses and camera systems. It was clear for me early on that digital cameras would become the dominant capture tool,” said Förderer.

“I got to see the developments from the ARRI D-21 cameras, and talking to the Munich technicians has helped me till this day in the understanding of sensors, and the challenges each camera system is facing,” he added. “I love the look of film, but was never captivated by film cameras. Digital cameras with all their possibilities and challenges kept fascinating me, and I have shot many tests.”

At film school Förderer met the director Tim Fehlbaum and got to shoot his production HELL, which brought him his first awards.

“Förderer said: HELL is set in a post-apocalyptic world where the sun is extremely bright; it makes life on Earth impossible. After shooting tests it became clear to us that following an extreme visual style would be the only way to tell this story. I over exposed the footage by three stops.

“The bright, blinding images made it possible to create a sense of danger, and hide possible danger the same way you can create suspense with dark images,” he added. “I became fascinated with exploring the limits of a capture format, be it extreme brightness or darkness. Shooting tests is very helpful for bringing your closest allies onto the same page.”

“Getting to know Michael at film school was a great privilege. Learning from his personality and approach to working with actors in front of camera shaped my own approach,” he said. “Jost is a legendary DOP who pushed the envelope in hand-held camera. DAS BOOT is a perfect example, and it taught me that a DOP must master disciplines on many levels in order to create extraordinary images.

“It is very important to learn from the masters of the past and keep the dialogue alive,” he added.

Next along his career road Förderer came upon the writer/director Mike Cahill. What shooting style did he figure out for Bliss and I Origins?

“Mike is a true artist. As a writer/director his stories are original and bold, and we developed a shorthand for working on those movies. He loves to operate the camera wherever possible, which I admire as it gives us all a direct connection to the images of the film,” he said. “Both the films take place in their own world, and with hand held camera we tried to portray authentic images close to the characters.

“On I Origins we used small spherical zoom lenses to be flexible and able to shoot fast throughout our locations. For Bliss we decided to contrast the spherical images with anamorphic lenses to help the audience differentiate between the two worlds within the story,” he added.

Förderer was 31 years old when he won his first big studio film. He said: “Roland Emmerich was the director and I learned so much from his way of staging shots to seamlessly integrate with VFX. On Independence Day: Resurgence we used large blue screens and relied heavily on VFX. But on our previous film Stonewall, we used large photo backdrops for set extension.

“The results looked fantastic and after the experience of Independence Day I was looking for a way to capture as much as possible in camera and put the focus on the viewer seeing more precise VFX shots,” he added.

In 2017 Förderer worked for the first time with a large-scale LED video wall, using a game engine for in camera set extension.

“This opened my eyes to this technique and ever since I try to add this to a production wherever it makes sense. The interaction of the light coming from the LED wall with the talent and the lens itself creates the most realistic images, and inspires me and the director to find the best possible way to visually tell the story”, he said.

Lens selection per job is a must do for Förderer, and he does like vintage glass.

“Lenses are the most important aspect in the early stages of look development. It all starts with the glass, and how it renders faces and light. Once I find the right type of lens, I consider the right camera and shooting format,” he said.

“Testing is the key to discovering how specific light sources and locations are portrayed. I have a deep fascination for old anamorphic glass, and most of my films I shot with anamorphic lenses,” he added.

Förderer tends never to repeat the same lenses and camera combination, but he says his inner eyes perceive the world in anamorphic. What does he love about the latest digital cameras, and what does he want as further developments?

“The immediacy of the look of the film is key in the process. I want the director and other key collaborators to see an image as close to the final result as possible. Most cameras can load 3D LUTS to show the desired look in real time, but I wish more real time effects could be integrated into cameras,” he said. “Grain and texture as live metadata would be one of these, but an emulation of lens looks also has to be integrated.

“The ability to capture a clean image for postproduction but showing live the predetermined non-destructive level of lens distortion, aberrations, and flare characteristics is a key feature I am looking for. Luckily, I was never in a situation where the camera/lens choice was a given,” he added.

I create a look book

Did he ever shoot anything on film stock? “When testing for a new project, I try to shoot one roll of film as a reference bench mark. This is very helpful in the look development but I don’t like to shoot an actual project on film. The precise nature of lighting with a digital camera allows me to be bolder in lighting and lensing choices,” said Förderer.

Does he see any skill sets problems around his multi country movie jobs?

“It is hard for me to judge if the right amount of talent comes out of film schools. Sometimes there is a big shortage of skilled people, and sometimes there are many people fighting for the same job. There is no single path on how to successfully land a job in production or post,” he said.

He got to work with editor Troy Takaki, so what role does he as a DOP have in the finishing processes?

“It all comes down to a close relationship with the director. Usually, directors show me various stages of the edit to collect feedback, and check if the ideas we had for certain shots come through in the cut,” said Förderer. “Before colour grading starts, I create a look book with references for each scene. This is based on the original photography but refined and sometimes more drastic, if changes are necessary for the story.”

From his experience, directors stay in control of the cut until the end, but in collaboration with producers and the studio. Has Förderer seen any new tool that would extend his toolbox?

“There is nothing groundbreakingly new, but the pace at which new generation lenses, cameras and new associated technologies come to market appears to increase rapidly. Small and lighter cameras in smaller gimbals allow for greater flexibility, and new ways to achieve interesting shots,” he said “The wide range of available lenses excites me the most.”

Not been done before

“It is a balance of doing justice to the period feel but adding a new visual approach to tell the story in a way that has not been done before,” he said.

Back in 2019, when elected, he was then the youngest active member of the American Society of Cinematographers. Does ASC after his name carry a lot of weight?

“The ASC offers camaraderie and wonderful opportunities for members to exchange knowledge and expertise. It is important for producers, directors, and VFX supervisors to listen to their cinematographer, and being the ASC member in the room does help for sure,” he said.