Apantac has launched the second generation of its UE series of multiviewers enhanced cascading functions, which includes more compact (at almost half the depth) models that consume less power than before. 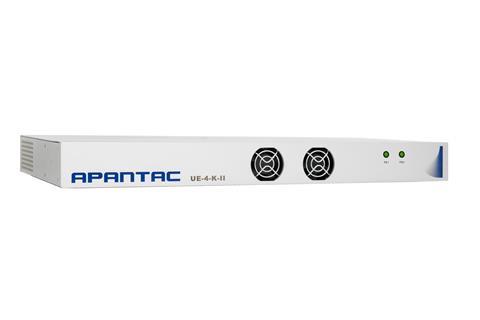 Efficient: The new generation is more compact and consume less power than before

The UE Series includes multiviewers that support either four or eight 4K/UHD HDMI 2.0 inputs as well as HDMI 2.0 and 12G outputs. Models are available with or without KVM functions and, if fully featured, they offer full audio support, serial interface and Ethernet connection for configuration and external control. This series also has an advanced on-screen display which includes graphic objects added to a layout, such as labels, clocks, dynamic UMD and tallies, alarms, meters, markers and more.

The range now includes the UE-4-DP, which offers Display Port inputs instead of HDMI 2.0. The UE-4-II and UE-4-K-II models can be cascaded together, as well as cascaded with the Apantac Mi-8 12G-UHD, an 8x1 UHD multiviewer with inputs up to 12G SDI. The cascade feature ensures users can combine more source inputs as well as mix input formats on the same display without extra latency. A KVM function allows multiple computers connected to the multiviewer to be controlled via a single mouse and keyboard. Users simply move the mouse from window to window (on their display) to switch the control from one computer to another one. A single operator can visually monitor and control up to eight computers on a single console with a UHD or HD monitor.