Bluebell Opticom signals control is on the cards 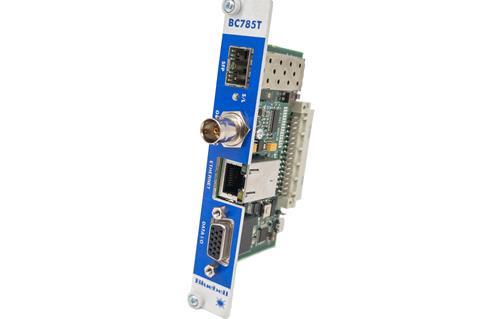 Capture: The new products are designed for applications such as remotes from sport events

The BC780 card is an optical-electrical transceiver card, designed to provide bidirectional transport of control signals of various types over a dual-fibre optic link. Bluebell says that a typical application would be the control and adjustment of video cameras installed in remote positions at major sporting events, festivals, or similar.

Based on the BC780, the BC785T and BC785R cards have all the functionality of the BC780, with the addition of either a genlock transmitter sub card or a genlock receiver sub card. These two card versions are designed to be used as a send/receive pair. The BC785T with a genlock input will be installed at the controller end of the fibre link, while the BC785R with an electrical genlock output will be installed at the camera end, so that the remote camera can be locked to the master system genlock reference.

All three card versions have a standard RJ45 10/100base-T Ethernet port for IP control data, an RS-232 I/O and a switchable RS-422/RS-485 balanced I/O for control commands in serial data form. A GPI input and GPO output are also provided. The fibre link is bidirectional, allowing command acknowledgements and other data generated by the camera to be received by the controller.