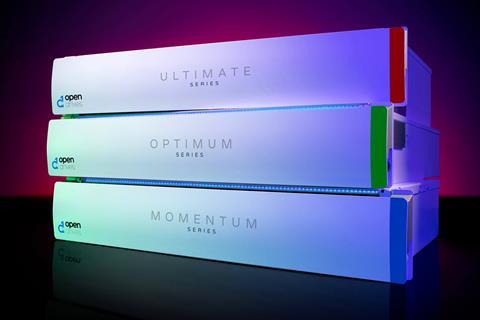 “In scale-up instances, the most common method to increase performance and capacity is to add more disks until a limit is reached. Then customers face the dilemma of adding an additional system which does not aggregate the capacity or performance, as well as being complex, costly and difficult to manage,” explained Sean Lee, OpenDrives’ chief product and strategy officer. “With Ultra’s architecture, customers can choose which dimension or dimensions they want to scale: capacity, performance, or both, without limits.”

The Ultra Hardware Platform includes three different NAS hardware series, all managed by Atlas, so that organisations can grow their storage in multiple dimensions – performance, capacity and concurrency – to match their business requirements.

The Ultimate Series offers the highest level of performance and throughput. Designed for speed and low latency, it incorporates an all-flash NVMe design in the form of the F and FD capacity modules to handle the most demanding workflows.

For organisations requiring a balance between performance and flexibility, the Optimum Series is configurable with either all-flash NVMe (F, FD) or SAS HDD (H, HD) capacity modules, or both. The workhorse of the Ultra Hardware Platform, the Optimum can handle resource-intensive workflows while also managing data integrity with ease.

The cost-effective Momentum Series leverages OpenDrives’ HDD (H, HD) capacity models to deliver high performance in budget. It is designed to excel at read or write-intensive applications or nearline repositories.

The new version of its Atlas software platform will be a free upgrade in Q4 for all OpenDrives customers. It combines all-new intelligence technology with automation in an easy-to-use, single-pane-of-glass centralised management system for the OpenDrives Ultra hardware. It can manage all OpenDrives’ systems from a single interface, no matter how geographically distributed they are. It also incorporates intelligent data integrity to ensure against corrupt data or data loss. New features include: inline and proactive caching; bandwidth throttling; and actionable analytics to support business intelligence.

OpenDrives has also recently adapted its NAS systems to fit the transition to a remote workforce for an industry that relies heavily on on-premise, on-lot production. In March, it introduced OpenDrives Anywhere, an in-place private cloud model that enables users to work on the same project from multiple locations, without compromises in workflow performance, quality or security of files.